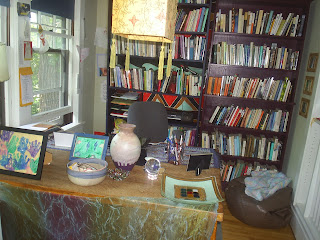 So Mrs. G is having an Open House! She asked all her bloggy friends to share where the heart of the home is, the beloved room -- the center and grounding space. That would be the Matronly office. That's her desk and a slice of her books, above. See that bean bag chair in the corner? Satan's Familiar thinks the Matron adores him, so that would be his unfortunate spot.

Near the Matron's desk are the prayer cards that one of her favorite Mama friends gave her. This lovely woman is expecting baby number 4 within the month and the planet will be better for that person! 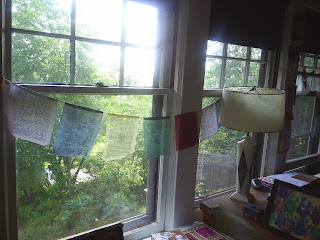 This makes the Matron happy. Next is a plate is a gift from her brother and his wife. Next to it is a crystal ball that one of her friends gave her. He's a working psychic, the same friend who had dinner (with her lo and behold these six years plus) and said: "Oh My God. You don't know it yet but you are pregnant and it's a boy." 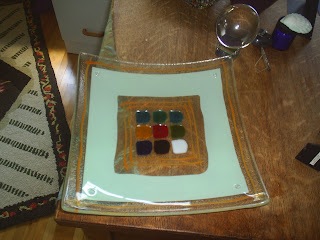 The Matron's first boyfriend (they were 16) gave her this gorgeous screen print. Hmmmm. She named her only daughter Scarlett. Detect a pattern? History? 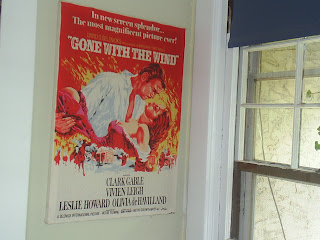 At the end of first grade, Stryker's teacher gave all of us his students these wood cuts with their names and real bear fur. This is nestled at the end of the Matron's desk. 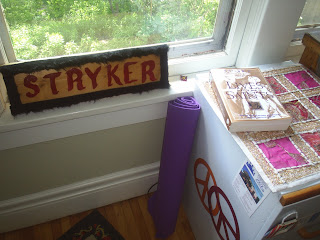 Did she mention that the office is tucked off the bedroom? Nowhere NEAR the center of the house? The office is actually a cozy three season porch that chugs along for one more season with a space heater. 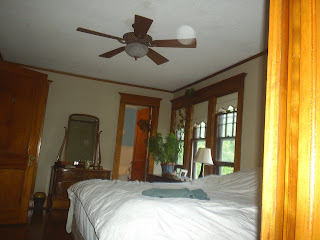 This room is up high. She has a panoramic city view in the winter and gets to witness nature and trees the rest of the time. 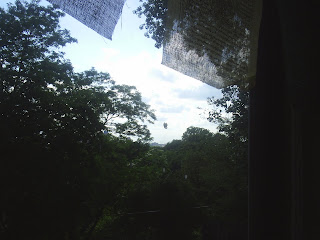 The Matron's birthday is November 26. On November 26h, 1996, her father called to wish her a happy birthday and Thanksgiving (which would be the 28th). They talked for nearly an hour. Her father told her how he waited all day, eagerly to call, and how amazing it was to be with his only grandchild in August! Stryker had been just a few weeks old. The Matron's father told her he wasn't feeling all that great -- indigestion -- but talking to her made everything worthwhile.

Her father died, instantly, on November 27, of a heart attack 16 hours later. Here's the only picture she has of any of her children and her father. He missed Scarlett and Merrick entirely. She misses him. 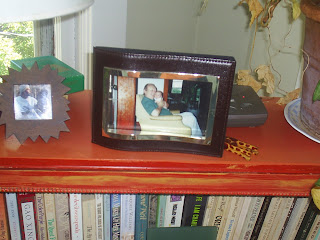 The Matron is still wiping her eyes.

This room is fully - her! Dreams, art, people, love, life. Books, art, yoga mat, meditation pillow. This is where she retreats and refuels. So, this is the room four other people also rely on. 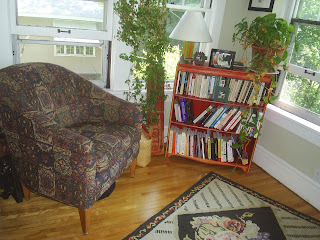 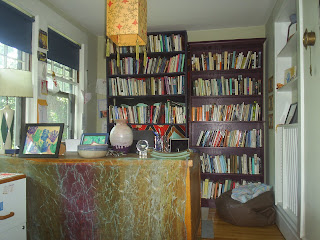 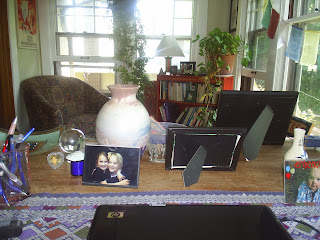 We all know Virginia Woolf's theory on a room of one's own. For this busy woman, who can't go to the hardware store without explanation, scrutiny and childcare? This room is a lifesaver.

Friday Addendum! The Matron will be away from her computer until at least Sunday night because she is about to turn into a toddler on meth. She will certainly be needing this room upon her return, friends.
Posted by Minnesota Matron at 6:59 PM

What a great room, filled with wonderfully personal and loved things. I am wiping my eyes with you over the photo and story of your Dad. It seems like the perfect place to recharge. Thanks for sharing.

I'd love a room like yours...filled with my treasures of course.

What a blessing you and the story behind your room are to me.

It's so clean! I am so jealous!

I did not join in Mrs. G's project this week. My office needs a crisis counselor.

You've taken Mrs. G's idea and really run with it! Beautiful - all of it. Thank you for sharing such a personal moment with us -about your father.

What an amazing room-I would love to come over for a cup of tea and some chaos.

What a lovely room. I love that it's high in the trees.

And that story about your father made me wipe my eyes, too.

Thanks for sharing your room.

Wow, you gorgeous American girlies all have such great houses - fabulous windows...I'm sulking now in a very unattractive way....I want to have an American House....
.....small hitch - I don't live in America:-(

A very special story too.
x

I have recently become the owner of a whole apartment of my own. I am still pinching myself to make sure it is not a dream. A room on one's own indeed!

what a room! It definitely screams that it belongs to someone and is very much loved and full of love.

I'm suffering from a severe case of bookcase envy.

I'm quite jealous of your aerie - it's beautiful.
What a blessing you got to speak to your dad that day and I bet you still get in a word or two with him from that room of yours. Thanks for letting us peek.

Trying hard not to be jealous that you have such a wonderful space to call your own!

That is a fabulous room - the history and stories behind the objects make it special. Thanks for the visit.

This room is absolutely gorgeous and oh so inviting. I'm always intimidated by rooms that are spotless without any "life" in them. Your room? You don't have to worry!!
and I forget just how BIG American beds are!! Yours looks wonderful...sitting there all fluffy and all under that ceiling fan!!!

I'm so sad reading about your father. Thanks for sharing with all of us!!

I love your room - very cozy. I'm so sorry about your dad. My dad didn't live long enough to see any of my children and it breaks my heart for him and for them. And for me.

Your room is wonderful. What a lovely place to retreat and recharge.

Beautiful office and even more beautiful stories behind some of the objects.

What an amazing room! Now I'm wondering how I can get a room of my own. :-)

Your room is beautiful, filled with so many well-loved objects and fond memories. Thank you for sharing it.

The story of your dad is heartbreaking but the room of your own? Restorative.

Thank you for sharing; I'm inspired to transform our spare room upstairs...

I LOVE this open house! Thanks so much for sharing the rooms and artifacts that showcase both the bittersweet and the joyful.

The matron really has built a room of her own. And thefirecat congratulates her and thanks her for inviting her in for a peek. (thefirecat would have brewed tea if she'd known it was coming!)

Thefirecat is also looking forward to having a real home again one day, and a room of her own that is the heart's home, the home's heart. Right now she's lodging, a little precariously.

Love the room and thank you for sharing the story about your father. I can feel how you miss him.

What a great room! I wish I had a sanctuary like that in my home. No wonder your posts are always so inspirational.

Great story about your dad; how wonderful that you got to speak to him once last time. ::sniff::

Completely weeping here over that photo of your dad and Stryker. My son was 15 days old when my dad died, two states away. They never met.

But, um, what I meant to say was that I love your refuge. I don't think I have a physical equivalent in our house; my daily run seems to serve the purpose.