The Matron is Famous

Cough, cough.
Thanks to Cheri for nominating this post to be featured on Five Star Friday. If only the Matron did not have to LIVE THROUGH that post several times a day.
Head on over to Five Star Friday and sing the Matronly praises!
Posted by Minnesota Matron at 5:41 PM 1 comment:

The Boy in the Body 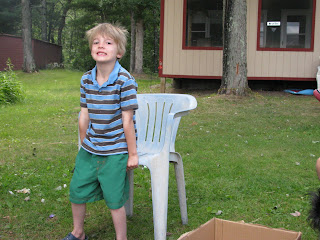 No.
Merrick still cannot read.
The Matron has chewed on this cud before.
Around the house, her joke has been "Merrick can't read but he can slide down the stairs in his footie pajamas." She should really film that. On his belly, a straight shot down some pretty steep (carpeted) stairs. Hy-ster-i-cal!
Yesterday, the Matron had this heady intellectual exchange with her son, who had spent the morning playing with a stick. You know, the kind that fall off trees.
Matron: "Merrick, would you like a friend to come over and do something really fun, like going to the playground or ice cream shop?"

Merrick: "No thank you. I'm playing with my stick."

And he did. For hours to the tune of the Matron's lament: "He can't read but he's playing with a stick."
You see, the Matron would want young Merrick to be arranging his sticks into some kind of algebraic equation or roman numeral outline for the novel he might be intuiting. But the Matron has recently come to understand just how fully BODY is her boy.
History Lesson 101
Merrick is 3 and Uncle Norm--father to two accomplished athletes-- visits and throws Merrick a ball. Half an hour of drills later, Norm says: "You should pick a sport and hire a personal trainer. This is like raw genius, that boy."
Merrick is 3 and takes like a fish to water. Swimming instructor: "You should really get him involved in a team or something. He's just good in the water."
Merrick is 4 and takes to T-Ball. Only he never needs the T and the coaches pitch to him. Coach: "You should really start training him as a pitcher. Set up a target and let him start hitting."
Merrick is 5 and shoots hoops with a neighbor. Neighbor: "Where is Merrick learning to shoot hoops? Is there a team or training? That kid can dribble."
Merrick is 6 and plays hockey in a Kindergarten League. Hockey Instructor: "Merrick basically put on those skate and pelted out there to score. You must've taught him to skate before, right? At least he's been practicing with a puck?"
Merrick is 6 and takes tennis lessons. Teacher: "I have never seen hand-eye coordination like that in 25 years of teaching. Tennis and golf. Get him swinging."
History Lesson, Complete
The Matron? Slow learner.
Thanks to a friend's wise counsel, the Matron finally fully appreciates how Merrick's gifts (and brains!) are in his body. It only took her three years to see this because she is of the sort who strikes out right before falling off the balance beam and hitting herself on the face with the tennis racket.
Not only did she assume that her offspring would follow in her disembodied direction, so unaccostumed to the realm of All Things Athletic is she, that she honestly did quite know this Realm for the Athlete existed until -- oh, about two days ago.
This is where her youngest child lives.
She needs to learn its rules--the way the athletically inclined think, read, play, compete, grow, etc. She plans to toss her child in and let him go. She'll follow in whatever sport he lands (if he even picks one or two or twenty).
At the wildly enthusiastic invitation of his tennis instructor, Merrick plays in his first competition next Saturday. He picked up a racket for the first time in June.
The prodigy is currently occupied and unable to entertain guests or questions. He is busy with a rock and a big pile of dirt (thankfully outside with Satan's Familiar). That should take him straight through Friday.
Posted by Minnesota Matron at 9:58 AM 14 comments:

The following exists in Full Throttle, Michael Jackson Memorial Volume. And happened today.
The Matron is in the kitchen. Scarlett in the basement. Merrick on the second floor. Stryker on the third floor in the family room.
The phone rings.
The Matron can see from the caller ID that this is John calling from work. She can also clearly see when Stryker picks up the phone from the third floor handset.

Still - knowing full well that Styrker is on the line -- she answers anyway: "John? What's up?"
John: "Oh. I'm calling with a question for Stryker and he's on the line."

Matron: "What? What do you want to know?"

From the basement -- "MOM WHO IS ON THE PHONE!????" This would be Scarlett.
The Matron screams into the general air.
Matron: "Daddy."

Scarlett: "What does he want? Why is he calling?"

Merrick (from his second floor bedroom): "WHY IS DADDY ON THE PHONE?"
Scarlett: "Mom! Ask Dad what's going on!"

Stryker: "Can everybody shut up so I can talk to Dad?"

Matron on the phone: "Really, why do you need to talk to Stryker?"

Merrick: "Why is nobody talking to ME. Whewe is Daddy?"

Scarlett: "MOM? Is that Dad on the phone? Can I talk to him? I'VE GOT IT."
Stryker: "I'm on the phone!"
Scarlett picks up from the basement. "Dad? Why are you calling Stryker?"

Merrick screams from upstairs: "I want to be on the phone too?"

Matron: "Why are you calling? I mean really, what's going on?"
Merrick picks up from the Matron's office: "Dad? Stwyker? Talk to me!"
Dial Tone.
Matron: "Kids? I think Dad hung up."

Scarlett: "WHY WOULD HE HANG UP?"

Stryker: "CALL HIM BACK AND ASK WHY HE'D HANG UP."
Merrick: Sob.
Those litle apples? Are not falling far from from the Managerial Tree.
Posted by Minnesota Matron at 7:38 PM 15 comments:

The Matron is pleased to report that she survived the briefest of forays into the wilds of Wisconsin. Wilds? Okay, the lake in which she dipped her toe is part of a sprawling collection populated by one cabin after another. She was exactly six minutes from espresso and a store (which is why she survived it).
Still, nothing suits an urban girl more than a return to the city. Just to see that cityscape, with all its promise ahead!
As part of reorientation, the Matron immediately locked herself in her bedroom and prepared for a return to full-time work and parenting by reading Sylvia Plath.

Here's where you think: "what? the mother who stuck her head in the oven?"
But she didn't kill her chlidren and that's more or less a Matronly goal, too.
The Matron's spirit is always buoyed and sustained by Plath because of language -- words, beautiful staggering sorrowful, words. Nobody can sling 'em like Sylvia.
Here's one of her favorite poems b Sylvia Plath. Nearly every line gives her chills.
Morning Song
Love set you going like a fat gold watch.
The midwife slapped your footsoles, and your bald cry
Took its place among the elements.
Our voices echo, magnifying your arrival. New statue,
In a drafty museum, your nakedness
Shadows our safety. We stand round blankly as walls.
I'm no more your mother
Than the cloud that distills a mirror to reflect its own slow
Effacement at the wind's hand.
All night long your moth-breath
Flickers among the flat pink roses. I wake to listen:
A far sea moves in my ears.
One cry, and I stumble from bed, cow-heavy and floral
In my Victorian nightgown.
Your mouth opens clean as a cat's. The window square
Whitens and swallows its dull stars. And now you try
Your handful of notes;
The clear vowels rise like balloons.
Posted by Minnesota Matron at 2:48 PM 8 comments: