The Matron and the Month 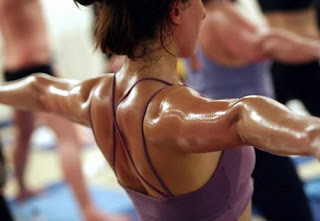 She knows, she knows:  50 is just a number.   Sure.  Trouble is that it's HER number now and she's still wiggling around the adjustment arena, AARP card in her wallet.

In an attempt to embrace the new era, the Matron recently re-dipped her toe into Bikram Yoga.  Yours truly has been a yoga devotee for nearly two decades (see that age thing again?) but hers is the gentler, kinder sort wherein light sweat dusting the forehead constitutes exertion.

Bikram Yoga?   Consists of 26 machine-like postures done at a clip in 105 degrees for 90 minutes.  That's right:  hard exercise for 90 minutes, 105 degrees.   The Matron did a class here and there for a couple of years.   Just after her birthday, she went back only to discover that each January, the studio offers a "30 in 30 Challenge."

Now, this appealed to the competitive Matron but Duty and Responsibility to the family and career settled in beside Fear to construct a sturdy wall between her and the 30 in 30 Challenge.  She has a job!   Three children!  A husband who would like to see her upon occasion.

More significantly, the Matron doubted her ability to physically make it through.  A Bikram Yoga class leaves the body limp and spent.  Her first class back in December?   She limped through the next day, muscles heretofore unrecognized screaming their existence.  Even her forearms hurt.    After a two year yoga absence, she just didn't she had what it took.  Besides, this was a younger person's game.

Still, the Matron ran it by her beloved.  Then the children.  She took note of the folks signing up for the Challenge, including a young married couple with two children and complex 'ex' and child care arrangements.   She began wondering:  why not?    Some people turn 50 and scale a mountain, take a cruise, or buy ridiculous jewelry (she bought boots).   Was it too much to ask of herself -- and her family -- that she immerse herself in a yoga that also billed itself a "90 minute open eye meditation."

January first, the Matron took a Bikram Yoga class and officially decided NOT to sign on.   She pushed her way through 90 minutes.  At the end of the class, you would think she had just stood under a shower, that drenched in sweat and exhaustion.    She congratulated herself on her good, common sense attitude toward that number and her realistic appreciation of limitations (time and body).  Just as she was walking out the door to leave, she noticed the young married couple officially turning over their thirty bucks each.

And without one second of thought, yours truly turned around and said:  "Sign me up."

Today at 9:30 am, the Matron is taking class number 28 in 28 days.   Her body?  Never, ever felt better.  Sleep?  Finally, not eluding her.  Psyche?  Laser focused and fit.  Family?  Incredibly proud of her feat and commitment:  not once did she ever consider skipping a class.  Indeed, she has become a bit nervous about getting there -- at this point, leaving very early to accommodate accident or mishap, bent on getting those 30 in 30, done.

Early on, the Matron decided some thing would just have to give.  The Challenge is a two hour daily time commitment:  90 minutes of class and 15 minutes travel/dress on either end (it's close and she's speedy).   She decided:  yoga, family, job.  That's it and in that order (yes, sorry kids).   So she's said 'no' to a couple of outings and skipped Sunday morning services at the Zen Center once.   John has taken over more domestic duties and there have been a couple of late nights.   But it's been worth every second.

It's not Mount Everest.  No.  But a psychological hurdle for the Matron, just the same, who truly convinced herself that something challenging was a younger person's game.  And then set about proving herself wrong.

Posted by Minnesota Matron at 5:24 AM 13 comments: