End of The Road(s)

Scarlett plays a weasel in this production. She was well-cast! Looks quite weasely, on stage, thinks the Matron. It is a small role, but Scarlett also understudies both female leads.

Twice--once during rehearsals and the day the show opened -- the Matron made this inquiry: "Scarlett? Do you know the lines for Rebecca and Carmen?"

Twice, the Matron was met with this: "Mom!"

The Matronly Stage Mother policy is to Leave The Entire Thing Alone, so that is just what she did.

Yesterday, SteppingStone Theatre called at 12:30 to let the Matron know that the girl who played Carmen was going home sick. Scarlett would be on stage in half an hour! The role of Carmen requires lots and lots of lines, constant stage presence and a hysterical song/dance solo that is a highlight of the show.

Now, the Matron could not recall one single moment her daughter put into practicing that role.

She immediately called John to inform him of the situation: "Omigod that child is going to be Carmen. Do you want to go to the theater and watch?"

So the Matron dropped out of her busy day and scuttled over to SteppingStone theater where she watched her daughter do a damn fine job! She was shocked! Although Scarlett reported that she made many mistakes, from an audience perspective, the performance looked flawless.

The song and dance? Terrific! Where did the child learn that stuff? The hand motions, the legwork!? The Matron held her breath during Carmen's longer speeches, wherein the character summarizes the play's main dramas. Scarlett nailed it! The Matron has new respect for her daughter, who is either truly a pro or very damn quick on her feet. Either will serve her well.

Tonight, the entire female half of the cast is spending the night--here! Guess what nine-year old made flyers and arrangements, set up the entire thing? The Matron understands that her little apple did not fall far from the organized, and community-minded tree.

But the biggest end of the road? Today is Stryker's sixth grade graduation ceremony.

Her brainy boy? He requested a thin red tie and black top hat to wear at the event. Today, he left in black jeans, a black t-shirt and the hat/tie stuffed in his backpack.

The Matron plans to weep through the entire event. Indeed, she is so certain of this, that she warned her entire family so they could start being embarrassed, early.

She is so proud of her oldest, who went through seven successful years at that school without a single trip to the Principal's office. Indeed, he was a patrol guard, good citizen and gifted student.

Alas, the Matron recently reread Anne Lamott's Operating Instructions, in which she makes wry comment about junior high school as being a worse peril to her child than say, death.

That has the Matron worried!
Posted by Minnesota Matron at 7:42 AM 25 comments:

The Matron has, upon occasion, been accused of falling into certain Liberal Stereotypes -- you know, the bleeding heart with big biases and assumptions to which she is blind?

Just to keep those folks happy (she's so generous that way!), she occasionally admits to behavior and belief that fall--with staggering perfection --into said Blind Liberal Stereotype category.

The Matron has long harbored a not-so-secret hope that one of her sons is gay!

She imagines all the lunching, shopping and gossiping she could do with an adult gay son, modeled after her very fine experiences with current adult friends, men she can consult on hair, wardrobe and celebrity footwear. A gay adult son would bring his boyfriend over for Sunday dinners and they would take the Matron to the theater, regularly!

She can just see those late night phone conversations and general dishing!

Now, when Stryker was three, he went through a brief dress and tight phase which the Matron heartily encouraged. She made sure there were bright cotton Hanna Anderson leg and dress wear in plentiful supply.

Imagine her disappointment when that phase not only ended, but was remembered with revulsion by her eldest - who gives not the tiniest teeniest indication that he swings toward the non-hetero.

Hope for Merrick was kindled by exactly one of these adult gay male friends! She and this friend, who has a strong psychic flair, went out for Thai food one night when the Matron was newly pregnant with Merrick -- so newly that she hadn't yet taken a test.

(see how much fun the Matron is having with an adult gay man? they are eating Pad Thai and gooey egg rolls, while having heartfelt conversation - about the Matron and her life, feelings and needs!)

The Matron felt like someone had just handed her that winning lottery ticket!!! And when Merrick turned out to be a boy, just as predicted, the Matron believed Fate sealed that deal.

Until she started to get to know Merrick.

The baseball playing, knee-scraping, clothes-ruining Merrick has given the Matron not a single indication that he might be gay. She had assumptions (okay, stereotypes) regarding this. For example, she initially anticipated that Merrick would play house and have tea parties. She imagines her future gay adult son would be reading books and painting. Perhaps taking a nature walk?

Instead, he is in a tree. High. And after that? He will be breaking windows or throwing a ball. Merrick wants to know if he can use power tools and ride a Harley.

Then, yesterday, the Matron was pulled aside by one of Merrick's teachers.

Teacher: "I hate to even say anything, because it's so cute. . . but, there have been rumors about Merrick kissing and today, I saw it. It's adorable, but: no kissing in school."

Now, the Matron's older children would never EVER kiss a school friend (would rather be stuffed in body bags, come to think of it) someone so this issue is new to her.

So she had this exchange with Merrick:

Matron: "Merrick, it's great that you love your friends, but you can't kiss them --especially at school."

Matron: "Who did you kiss?"

Matron: "Henry? Oh. Anybody else?"

Hope! Rekindled.
Posted by Minnesota Matron at 8:21 AM 24 comments:

What Mother Nature Gives Us 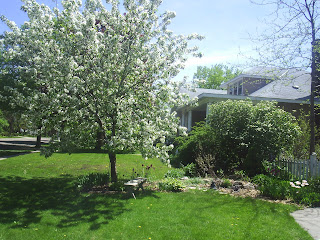 Given the Matron's unique weather history, she is doubly grateful that Sunday's tornadoes decided to skip her this time. She joins the rest of the state mourning for the family who lost their two-year old son to the weather.

Weather is dangerous stuff, folks. Toss an earthquake into that definition and the entire planet seems to be suffering, inordinately.

So much tragedy sobers. Maybe that's why the Matron has been doubly grateful for life's small beauties. Like Peace Day at her children's public Montessori School. Thursday looked like this: 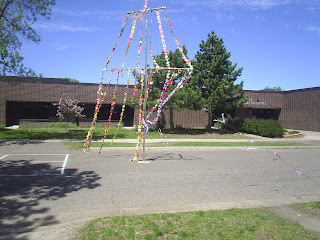 This gym full of children? Friends, they stood up and waltzed, boy-girl, as a unit. The Matron was not the only parent choking back tears, it was just that damn sweet. 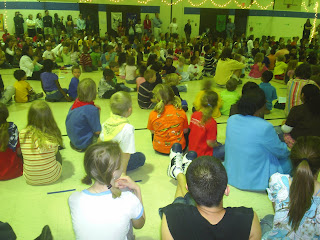 Here's the Visiting Artist who taught the children folk songs and dance for six weeks, culminating in Peace Day, a day long celebration of Peace. JJ Hill Montessori is an International Peace Site! 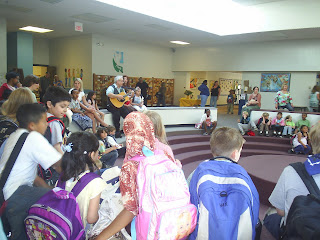 The Matron wanted to run into the bathroom and weep, just knowing this guy would be in the Hormonal Hell of Junior High School next year--perfectly timed to torture the perimenopausal Matron, who is riding her own interesting hormonal waves these days. 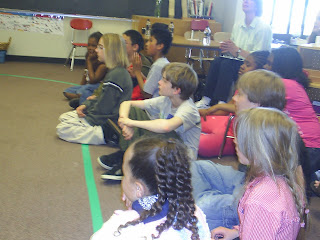 Merrick was crowned "King" in this classroom. 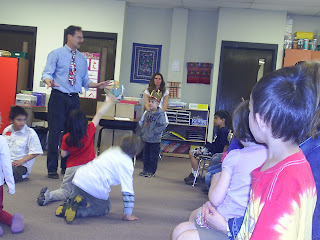 She watched her daughter dance. 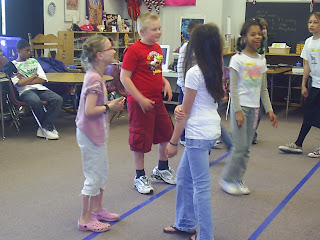 And generally soaked in the beauty of all those children -- there were bagpipes and fiddlers and an eye-popping spring day! 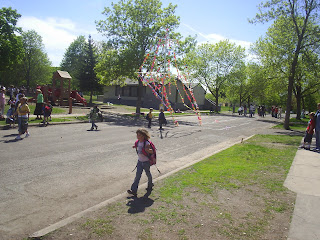 What elementary school gets talent like Peter Ostroushko, the Prairie Home Companion regular?! The Matron found lots of excuses for hanging out, here: 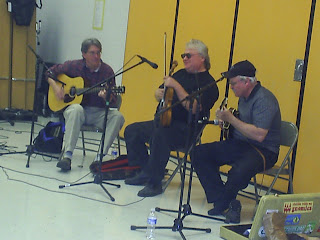 An entire day spent at school also provided information about her youngest child that gave the Matron pause. Merrick is without question the Class Clown, the goof ball. He is also the only one of her children who was not reading (well, too) by age 5. She wonders if there's a connection. 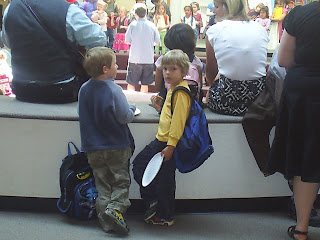 Mother Nature has handed the Matron Spring! There's a sense of expansion and joy in the air! Gratitude, spring, the sobering reality of how tenuous this life is, how brief. Even Satan's Familiar rides the wave . . 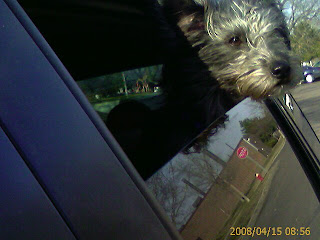 She wishes each of you, your own beautiful spring ride (with no bad weather).
Posted by Minnesota Matron at 8:25 AM 9 comments:

More On My Success, So Far

Friends, have you seen today's cover story about the perils of blogging in the New York Times Magazine?

It's worth the read, but the Matron could not move beyond the opening lines:

Pushing the ripe old age, of uh, what -- 27 -- Emily Gould has a Times cover story all about the troubles that followed her staggering success as a writer?