That Other Child Speaks French, Too 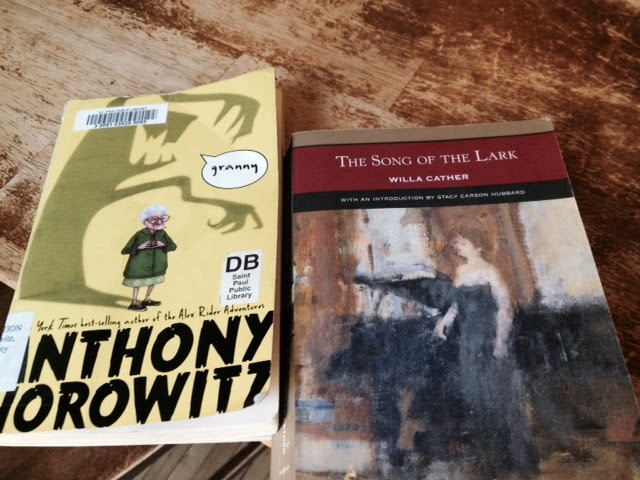 Last night the Matron and her husband had good friends over for dinner.  Despite the fact that their child and hers have nothing in common except age (11), she is pretty sure that the two were switched at birth.
Guess which child is reading which book?
Guess which child was FORCED by a school assignment to read said book and which is on a Cather kick -- at age 11.
Matron: "Merrick, would you like to go to the library today?"
Merrick: "Are you forcing me?"
Matron: "Of course not! I just thought maybe you wanted to just check out some books."
Merrick: "Do you know me at all?"
Posted by Minnesota Matron at 8:05 AM 2 comments:

The Matron appreciates how the discourse and language have changed.    Initially, that death rate was 50%.  Now it's a BIT bigger.

The Director of the CDC initially said:  Ebola will never come to the U.S.

"We have to work now so that it is not the world's next new AIDS."

About a month ago, the Matron found a bat sleeping on the basement stairs. After a few shrieks and faints, she managed to haul her husband down there to remove said villain. Leather gloves were used and cardboard, not human flesh, made contact with the vermin.

But, UGH! My, what teeth you have, Dracula! This is SO a picture from google!

Alas, that bat was to be the Matron's psychological undoing. She remembered the northern Minnesota man who died of rabies this summer: he didn't even know he had been bitten. Still, reason prevailed until she listened to This American Life's Halloween Real Life Horror stories on RABIES. Specifically, about a woman who couldn't rip the rabid raccoon off of her.

Oh My God. While listening, the Matron peeked outside by the garbage can, checking for raccoons. Or skunks. Wildlife, in general.

Then, the radio narrator issued this warning: if you ever find a sleeping bat in a child's bedroom, that child must be vaccinated against rabies! Children or the infirm can be bitten without knowing, while they sleep. Now, being the infirm herself, Matron did what any rational, phobia and panic-oriented person might do at that moment.

She got online and starting researching bats and rabies. Yup. Dropped everything in the middle of a busy day and got going on THAT special project.

The upshot of this endeavor was that the Matron became inclined to - and did! -- type her very own little email message to the Center for Disease Control in Atlanta, querying those good folk about the sleeping bat in her basement and the possibility that her entire family was already doomed but didn't know it. Now, do you know anyone else who sends email messages to the CDC?

The CDC is THE hot spot for fueling the Matronly fears.

They actually answered! Suggestions for psychiatric care aside, there were reassurances that Official Government Word is on a sleeping bat, far far away from humanity in the household, poses no vaccine-warranting danger.

But there's still that issue of future bats, sleeping in bedrooms. This is a pesky problem because there's that whole issue of finding the sleeping bat in the first place. It occurred to the Matron -- as she rationally thought the entire logistical endeavor through--that one would have to actively seek sleeping bats, keep an eye out. Unless that bat was going to lounge like Satan's Familiar, cozy on the bed or conveniently located on a bookshelf or floor (like, look, over here! here I am, rabid bat!) , the Matron would need to deploy some kind of tactical search and retreive team throughout her children's bedrooms -- every day.

"John, I didn't get a chance to search the children's bedrooms, but would you please check for sleeping bats? Oh, and pick up the prescription at the drugstore."

Email message, sent from school: "John, how's the sleeping bat search going? Did I mention that you should look in closets and under doors?"

Phone: "You know, sweetie, the CDC website says to patch holes to prevent bats from entering. There's that huge hole in our smaller closet that needs attention. In the meantime, can you duct tape the bottom of the door shut? We don't need to go in there."

The Matronly state of panicked affairs is reminiscent of Y2K, when a very strange thing happened to her.

She was convinced that there was at least potential for complete global collapse. Anarchy. Food shortages, gas crises, riot in the street. The internet can be a dangerous thing in unstable hands, and the Matron's? Her hands were shaking (literally -- and that's a clue)!

In the six months leading up to January 1 2000, the Matron was a shaking, quaking, weight-losing mess. She spent as much time as possible online, hanging out on survivalist web sites and reading all about the mayhem promised ahead.

Her neighbors did not help. There was much discussion of 'living off the grid.' How to make your own heat, fuel and electricity. Now, the Matron very much liked 'the grid' and had no intention of living off it it: she just didn't want that municipal network of heat and electricity to go away or be threatened!

How about that family slaughtering rabbits for food? Right down the block. All those adorable bunnies' heads hacked off and the rest popped in the freezer. That family butchered and froze bunnies for the entire year of 1999. The backyard was a row after row of cages.

The Matron would stand on street corners with these people, plotting.

The entire situation peaked one fall night when the Matron came downstairs and laid out their survival plan to her husband. They would pack the dogs, children and vital ingredients and flee to Leech Lake Indian Reservation where their dearest friends lived.

Indians know how to live off the grid, she reasoned. We can stay with them. We might not need to, but there's Plan B. Go Native.

Now, the Matron doesn't know how John knew to do this, but he did. He held her hands and said this:  "Let me take care of the survival plan. Stop the research. Don't think about it. I'll do everything - - assess the risk, make the plan, stockpile food and water. Please just hand this problem over to me. Trust me to take care of you."

And she did! Literally, just like that. She turned it over, relieved.

Occasionally, she'd check in: "Are we storing fuel in the garage? Do you think canned food would be a good idea?"

Still, one day, the Matron took her quaking shaking weight-losing, hair-falling out self to the doctor because she just didn't feel quite right, impending apocalypse aside --hadn't, ever since Scarlett was about six months old. Turns out?

Which helped explain her penchant for survivalist web sites. Still, post-diagnosis (and the drama of getting that thyroid in line will be another story), the Matron found herself standing in front of 200 count packs of Q-Tips, dirt cheap on sale.

Naturally, she put 20 packages in her cart. She just had to stock up on something!

On December 31st, 1999, John remembered to fill up the car with gas. He bought nary a bottle of water nor can of corn. And the Matron hasn't purchased a Q-Tip in approximately 8 years.

Maybe she'll check her thyroid levels in between forages for rabid bats.