Little Bit of Heaven for Your Friday

What the Matron loves best? How completely contented smiles slip from these boys, from time to time. Art! The Matron recognizes that smile --joy, being present in the moment, in the music.
Posted by Minnesota Matron at 11:05 AM 4 comments:

Wherein She Recommends You Read Something Someone Else Penned: Heresy!

The Matron found herself quite taken by Sandra Tsing Loh's lament on marriage. Good relationships do indeed take work. Thanks, darling (because sometimes, but not always, her husband reads this blog).
Such inconsistency constitutes grounds for divorce, she's certain!
Seriously -- a very thoughtful piece decrying the modern marriage.
Posted by Minnesota Matron at 10:22 AM 4 comments:

How the Day Went

Last night found the Matron eating dinner around 8:37 pm. She still had on heels and skirt. Merrick's best friend and future husband, Lachlan, was spending the night --and dying for some action.
Lachlan: "John, will you take us on a walk?"
John: "After I clean the kitchen."
beat, beat goes the clock
Lachlan: "Are you done yet?"

Visual Clue! There is not one inch of empty counter space because MEN have been home alone and in charge of cooking. Plates, pots, pans, utensils --each with varying degrees of content left, half-baked or uneaten, within. There is a layer of Meal (think grime) on stove and the sink is functioning as general dump site.
John: "Not yet, Lachlan."
John ties on his (very manly) cooking and cleaning apron.
beat/beat goes the clock
Lachlan: "Now?"
Mind you, the Matron's hands are not getting messy. In full work regalia, the lovely lady is at the table trying to assess the post-vulture options for dinner. She is eating in the wake of FIVE males, inlcuding one six foot tall teenage boy.

There is not much left. Although she hears Satan's Familiar got a full pork chop when heads were turned. Damn that doorbell.
Lachlan: "John?"
John: "Lachlan, you know how in cartoons sometimes the bunny's head spins around and around and around and his eyes bug out and steam and fireworks come out of his ears?"
Lachlan: "Uh Huh."

John: "That might happen to me. So you better go in the living room because it's sort of dangerous."
Lachlan: "Can't I watch?"

Lachlan shares Scarlett's steel will (or Scarlett's inability to take not yet for an answer which would require actual physical horrific waiting) so he turns to the Matron.
Lachlan: "Mary will you take Merrick and me on a walk?"
Matron: "It is physically impossible for me to take anyone on a walk because I rose at 6 am, cleaned up Jekyll's night time accident(s), fed the three dogs and forced them outside, picked up and carried the two geriatric dogs back inside and then took Satan's love child on a five mile run so that he could lose five pounds of body weight through poop -- all before eight hours of lectures on technology and teaching (mindomo! Ning! Bing! Twitter and Dvolver and zohono. she is full of .com) followed by a completely fruitless trip to a northern suburb in search of the one item Scarlett wants for her birthday and nobody seems to have, followed by a swing to your house to retrieve two emerging police-fire-superhero-men and I have been gone for nearly 12 hours and have not yet had dinner and am still wearing a skirt. With heels. Which is why I am unable to do the walk thing."
Lachlan: "Is that sort of like your head going round and round?"

Matron: "Exactly!"
Lachlan: "That's actually not so fun to watch. Or very dangerous - John."
Thus deterred, Lachlan heads to the living room where Merrick awaits.
John: "Whatever happened to the simple: no, thank you."
Matron: "The fireworks coming out of your ears while your head spun round hit that simple no, thank you, and knocked it over into the house of someone less exhausted."
Things just got better from there . . . ?
Posted by Minnesota Matron at 9:40 AM 7 comments:

When the Matron was a VERY Young Miss--as in high school senior---she was tepidly head over heels in love with her first serious boyfriend.
He used to do adorable things like request this song on the radio. They would listen to it in the tiny gas station where he worked: Young Miss swinging her legs and sitting on the counter, while the boyfriend ran out in snow, wind and rain to pump gas.
And she says tepidly head over heels in love because the boyfriend was always saying this:

"You're going away to college in the fall and you'll leave this small town behind. I'm going to fix freezers and small engines for the rest of my life, just like my father. I'm just a pit stop in your life here. My life is going to be completely forgettable but yours might not be."
Not once--not ever once --did the Young Miss or her boyfriend pretend this was anything but true. Instead, every time he reminded her (them) of her impending departure and potentially heady adventure ahead, they both experienced a moment of somber agreement, recognizing Truth.
They let the song's promise of eternity stand in stark constrast to the reality they shared, without ever commenting on the irony.

She left that small town when she was 17 and never went back. He never left-- not ever. The Matron doesn't even think he went farther than a week holiday in Wisconsin. She wonders how far he traveled and the lives he spent, in his interior world.
Sometimes she thinks about how unquestioningly they accepted their destinies--and how, at 17, how resigned he was to his.
Posted by Minnesota Matron at 7:33 PM 13 comments:

Because It's Really Always About HER Anyway 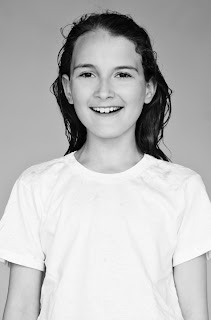 Last year about this time, Scarlett found out in the same week that she had landed the roles of Helen Keller and Ramona Quimby.
The very wise actress who played Annie Sullivan in The Miracle Worker sort of IS a Miracle Worker herself. Hearing about young Scarlett's coup, this actress said to the Matron: "Your job is to worry about the no. Because it's coming. It always is."
The Matron immediately recognized the wisdom in that statement and ever since, has been parenting to the No. Indeed, during the entire run of The Miracle Worker and Ramona Quimby, the Matron kept that upcoming no in mind and tempered all attitude, opinion and actions toward that No ahead.
It's a very Buddhist stance actually. The upcoming No allowed her to enjoy the moment and her child's joy all the more, knowing its brevity. The upcoming No reminded her that too much emphasis on or praise over success meant failure would leave a tremendous vacuum in Scarlett's psyche and life. If everyone is all about how great it is that you're the star of the show, what happens when you're not?
So the family kept it low key. Indeed, Stryker has made it his part-time job to moan, eye-roll and otherwise cry foul whenever anyone mentions Scarlett + Acting. While his intent was nowhere even NEAR the remotest region of Scarlett's best interest, Stryker's anthem--a nifty tune entitled Scarlett Better Not Be the Center of Attention Because that Role Belongs to Me, was a nice salve to the daughter's spotlight.
The Matron was reminded of the No when a local agency called and signed Scarlett and turned that No over in her hand again while the agent in L.A. auditioned and signed the child as well.
Now the No has leapt from her hand and asserted its rightful place at the hearth of the home. Scarlett has repeatedly faced rejection -- for two Disney sitcoms, a handful of commercials and three shows. Scarlett has sweated it out at callbacks in which it was clear that the director was choosing between two -- Scarlett and another and the other prevailed. Having an agent means your ten-year old competes among hundreds -- maybe even thousands for that Disney stuff--of talented little girls harboring the same great big dreams of acting.
While there have been some successes in the 2009-10 theatre line-up--one at the History Theatre and a reprise of The Miracle Worker, here-- the No is definitely first at the finish line these days.
And the Matron has learned something, well, surprising.
Scarlett--as far as her mother can tell and trust her, she's queried -- is genuinely fine. This is, honest to Buddha-Oprah-Allah-God-Universe what that child told her: "Some people get all upset about rejections because they're not real actors. When you're a REAL actor you get some, you lose a whole bunch, you get some and you just keep on going. It doesn't matter."
Indeed, Scarlett auditioned for a commercial this morning and ended up inviting the competition (who played Susan in Ramona) home to play, afterward. The girls are at a laptop critiquing various things Entertainment Industry, as she types.
And the Matron? Of course, once again, parenting has forced Insight Into One's Own Self and Neuroses. Scarlett's graceful acceptance of No as part of ordinary life sort of floored the Matron, who realized how that word conjured up Toddler Like behavior and emotion in her own crusty little heart when the NO was NOT directed toward her daughter -- but for her own fine self.
You see, it took her nearly THREE YEARS of feeling sorry for herself when her literary agent didn't sell her two award-winning very fine manuscripts before she could start penning pithy prose again. Three years beating the brick wall of No before she was able to think one creative thought. Indeed, this blog was her inroad to that artistic well again, her return to the Word.
Shockingly, the Matron realized that she never fully embraced, understood, examined or accepted her own No. Indeed, she shrugged off No as the mistake fate made while waiting to award her Success. She has been--still is---waiting for the yes without an appreciation for the No -- the VERY OPPOSITE of what she just spent the past year teaching her daughter.
And finally learned, herself.
She'll keep working on manuscript number three. And think -- maybe. And let anything that happens, be fine. That's life as a writer.
Thanks, Scarlett.
Posted by Minnesota Matron at 12:53 PM 12 comments:

The Matron Makes a Recommendation

If you haven't had the pleasure of meeting the Noisettes, consider yourself formally introduced. The Matron is head over heels for them. . .
Stage Mother, tomorrow: on rejection, faith and future.
Posted by Minnesota Matron at 9:47 AM 2 comments: