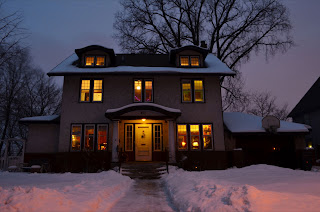 This is the Matron's house. 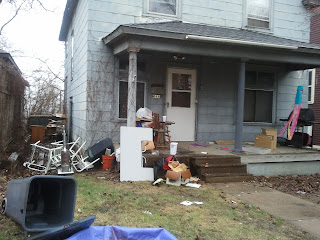 This is the house next door.


Scott and Lori left last night.  Their house -- decomposing garbage heap that it is -- was nonetheless theirs until the bank took over.    Lori was a bartender until a few months ago when a breast cancer diagnosis left her unable to work.    Her son, Scott, barely stumbled out of high school and now hammers nails for a living, doing construction for a friend.

The Matron wishes there was a neat narrative for Scott and Lori:  good folk, hard times, and all that.   But in reality, what these folks were not?  Smooth sailing.   Let's just say that their house is the only one on the block defined by filth and chaos.

When the Matron first moved into the 'hood, Scott was about 11 and Lori had a hard-drinking, gun-toting, boa-constrictor owning boyfriend -- Casey (so not everyone's real name).

Casey liked to show Stryker (then 6) his loaded handguns.  Casey let Stryker peek into the windows at the 17 foot snake nesting in the living room -- alongside the four, child-eating German Shepherds who (although related in various ways) did nothing but reproduce.

The entire group appeared to use the floorboards as a bathroom.

Stryker:   "Can I go to Casey's house and play with the GUNS and BOA CONSTRICTOR?"

Just what every mother wants to hear her son shouting out on a beautiful summer day:  can I play with guns and boa constrictors.   No, honey, you can't.

Casey had his own sons who sometimes visited.  That father made a big show of letting his two boys sling those guns (loaded?  unloaded?  nobody knew!)  on their belts and swagger around the front yard.    They brought the boa constrictor to the front porch and paraded the child-eating, biting, barking, German Shepherds up and down the sidewalk.

Those were good days. A bad day?  Add virulent, violent screaming matches between Casey and Lori  -- oh, and visits by Lori's older son, Mike.   Who was a meth addict.   Mike had another bad habit:  breaking into people's houses to steal stuff.  The two - meth and theft -- were a unit and meant Mike was in and out of jail (and in and out of half the houses on the block).

The situation was bad enough that the Matron could not allow her children to play outside unless this magic combination existed:  1) Casey wasn't home, 2) Casey's boys weren't visiting, and 3) Mike and his gang-banger friends weren't casing the block.

For one awful summer, exiting the house felt like putting her children's lives on the line.

As part of this powerful learning experience, Matron did pick up a new savory insult, thanks to the mother of one of Mike's growing pack of children.   This is what you say to your ex-boyfriend at 2 a.m. -- screaming in the middle of the street works best:  "YOU SMALL DICK BITCH!"

Now that has a ring to it.

Casey and Mike were perpetually moving on -- Casey and Lori breaking up and reconciling, Mike back in jail or living elsewhere. . . .until, finally, blessedly, both departures became permanent.    The day an actual truck pulled up to haul away Casey's snake and less important belongings, the Matron walked into her house and prostrated herself:  "I believe in Jesus!"

True.  Her children still speak in amazement of the sight -- Mom on the floor proclaiming love for Jesus.

Over the past few years, life next door settled down considerably.    Indeed, their lives settled into the sort of grind poverty and lack of education bring:   early mornings and late nights, defined largely by working for minimum wage.   Mike sometimes visited but now, drug-free, and with his wife and that particular pack of children (NO idea where the meth-encounter children are).   Scott held various steady jobs and brought home a case of Miller Lite on the weekends.

The Matron has been inside the house twice in 10 years.    The first time, she staggered out, stunned that anyone could live there.   It would be nearly seven years later and a cancer diagnosis for Lori that brought the Matron back into the fetid mess.    Because when your neighbor has cancer, you help them in small ways when they ask, even if it means bracing yourself, holding your breath, and touching nothing.

With the cancer, economy, and general spate of bad luck, the whole block knew that the bank was coming.   Still, yours truly was slightly unnerved last week when Lori told her that the end was near:  they had to be out, May 1.   Still weak from chemo  -- but alive, thanks to a Minnesota program that pays for breast cancer treatment for the uninsured -- Lori had to scramble to shove her life into green plastic garbage bags, boxes, and in the end, a pick-up truck.    She moved into a friend's apartment.  Scott -- who probably will never make enough money to really make ends meet -- moved in with his father.

The remaining two killer German Shepherds-- one of whom once bolted from the house and BIT the Matron, leaving a permanent scar on her arm . . .   at a nonprofit animal rescue.

Although the whole block is worried about what will happen to the house, nobody's particularly sorry to see its residents leave, although everybody feels badly about it in a roundabout sort of under-involved way.

Every weekday morning at 5:30 a.m., the Matron pulls the kitchen shades up.  She clicks on the warm yellow kitchen table lamp.  She starts a kettle of hot water, coffee, and feeds the dogs.    Being the first one up is medicine for the Matron:  she needs that space, the ability to test out her bones and brain, scan the sky for the weather.

Every weekday morning at 5:45, Scott walks to his car, which is parked directly across the street from the Matron's kitchen window.   Every weekday morning at 5:46, Scott pauses as his car door opens -- to smile and nod (and sometimes give a little wave) to the Matron.  She imagines how he sees her --  the woman moving in the brightly lit kitchen -- a little yellow glow and movement in the black box of Minnesota morning sky.

She waved back.  Every day.

And the Matron will miss that.   Good-bye and godspeed, Scott and Lori.

Adventures in the Emergency Room

The Matron is a fan of Mondays:  her children go to school!

Last Monday, JJ Hill Montessori Elementary welcomed Merrick at 8:20 a.m. and spit him out at 9:30 a.m.    Yes, she received the dreaded School Nurse Phone Call, this time announcing that her child had a fever of 100. -- with a wee tenor of "how could you miss this, Mom?"

Merrick languished at home through Wednesday, in a state vaguely reminiscent of his Vitamin D haze.   The Matron, who likes occasional moments ALONE, was in her own state:  agitated.  She could not wait to send that child to school.   Unfortunately, Merrick's relatively languid, low-grade fever and discomfort spiked into tummy ache agony and Thursday morning found him at the doctor's office instead of in school.   With his mother, of course.

The pediatrician promptly sent Merrick to the ER, certain this was appendicitis.  The Matron, who has been down that road before with her oldest, knew enough to grab her favorite take-out on the way to the hospital.

Merrick, waiting for his mother's food at the restaurant:  "Aren't I an emergency?"

Matron (appraises her son):  "Not really.  You're not bleeding or choking, right?"

Minnesota Matron:  "You betcha."   That's just what we say here -- works for nearly every situation.

However, it would turn out that the Matron did not need to stock up on food or other hospital-stay supplies.  One ultrasound and x-ray later and the diagnosis:  poop!

Matron to doctor:  "But he hasn't been constipated.  All systems have seemed quite normal."

So they slumped home, Merrick still clutching his stomach and the Matron, in a thorough and complete funk on several time-wasting, bad-parenting, over-reacting levels.    She poured her son a big glass of Metamucil and pondered the many benefits of similarly sized wine.

Imagine her surprise when the phone rang and "Children's Hospital" popped up on caller ID.   Certain that she was about to be upbraided for something, she nearly didn't answer the phone.  Nearly.

Let's pause here, to fully experience that gap between "you don't have to rush back to the ER, but" and what comes next.   How long was that gap?  A second between 'but' and --what?

Forever can indeed be an instant.

And the Matron sat down.

It turns out that Merrick has calcification around his adrenal gland.   That slim bit of information is all that the doctor would give her -- that and instructions to schedule another ultrasound, ct scan, and blood work as soon as possible.

Thanks to her highly efficient internet skills, the Matron has been able to come to some conclusions while they wait for the tests (Tuesday).

Calcification  =   Bad News.  Universally -- there is no way around this.   But calcification is also  a frequent companion to Vitamin D deficiency -- involving some odd imbalance of Vitamins D, K, and calcium.  An although calcification is also a marker for cancer, tumors of various incarnations, and autoimmune disease, the Matron has done what any sensible parent would do and has selected Door Number One -- Vitamin D--as the culprit.   She also discovered that repairing the Vitamin D deficiency with the mega-doses Merrick has been slurping causes . . . (drum roll):  constipation.

Tests on Tuesday.   And that mistaken appendicitis diagnosis and half day in the ER?  Doesn't feel so much like wasted-time any more, but great good luck.