Truth, Being Stranger than Fiction

So the Matron has been a bit blue, as of late, about her writing. Specifically, about her career as a novelist.

She's raked this issue over the coals on this blog before. But she hasn't been writing. Has not been revising that much lauded but unpublished manuscript into a Young Adult novel, as advised. It's not that she thinks such revision a bad idea, she just hasn't found the fuel to start working, which is unlike her.

Her writing road block has bothered and depressed the Matron. Partly, it's time. There's that full-time job to consider. Oh -- and those children. But it's more. She just doesn't know what.

So an unsettling, ugly feeling has been following the Matron around, all over. It's with her when she slides between the sheets at night, while she's tapping her fingers at a red light or sitting down to dinner. The ugly cast has not made her much fun at parties, either.

The entire situation seemed untenable last Tuesday night. At her wit's end with unhappiness, she was driving Stryker home from his very successful Science Project Interrogation (more on that later). He did well, finishing with the scrutiny at about 9 pm.

Here is the despondent, yearning Matron, driving yet another child through a pitch black and mind-numbing winter night, with temperatures well below zero. Stryker was listening to his iPod, lost.

So she said something like this --and it was indeed sort of a ramble because the Matron believes in covering more bases than exist-- out loud: "Okay God, if you're there, I need a sign. If I'm not working on the old novel, is that because I should be working on a new book --the Matron-family stuff or something other than the old material? Am I supposed to be switching to something new? Should I even be writing!!? I just need a SIGN."

Just as those last words floated out of her mouth, she pulled to a gentle stop at a red light -- right behind a car with an Iowa lisence plate that read: W R I T E.

Because God-Buddha-Allah-Oprah-Universe understands that some people don't just need a sign, but a big fat thump on the head. She got the message.
Posted by Minnesota Matron at 6:16 PM 21 comments:

The Matron is sort of a Burt's Bees kinda girl, and by extension, so is the family.

After school today, the Matron noticed -- sort of out of the corner of her eye and in the midst of a frenetic Thursday shuffle -- Merrick diligently applying balm to lovely lip. He had the stash in his pocket and seemed to take particular joy in Application.

Belatedly, through the fog that is "Essays are Due this Week and America is Illiterate," the Matron noticed that Merrick was pulling this from his pocket: 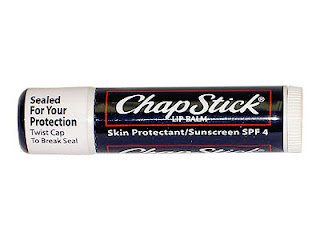 The Matron hasn't purchased one of these since Oprah warned of its dangers. Really.

Matron: "Merrick? Did I give you that lip balm?"

Matron: "Where did you get that?"

Merrick (taking said item from pocket and applying liberal swipe across lips): "I found it on the pwaygwound. In the snow."

So much for washing your hands after you pee.
Posted by Minnesota Matron at 8:12 PM 17 comments:

The Matron thought long and hard about posting this (well, okay, more than 30 seconds) because her brother and sister--not her mother--know about and sometimes read this blog. She understands that they have an entirely different relationship with their mother than the Matron does. So this is her experience, only.

When the Matron was a Youngish Miss, 29 or 30, something disturbing happened to her. All she wanted to do was run this event by her mother, even though past experience and common sense told her that such Outreach would not unfold as hoped for. What Young Miss hoped for was that her mother would say something like this: "I love you. Everything is going to be all right. "

Instead, here's what her mother said in the dark face of her daughter's crisis and need: "Please don't tell me anything about your personal life again."

Yes, she can hear you gasping. And you know those are the exact words, because how can you forgot something like that?

Those words broke Young Miss's heart. She hung up the phone and wept for hours. Thankfully, Young Miss was seeing a very wise therapist at the time who declared her mother's statement a great gift. The therapist advised the Matron to honor her mother's request and not tell her anything about her personal life, ever, again.

Wait until she asks about something, advised the therapist. Only then, because you'll know that your mother really wants to know.

To this day, the Matron's mother does not know where her daughter works, the kind of classes she teaches, how relationship with her husband is, what her dissertation was on, what she minored in in college or graduate school, if she's volunteering at school or elsewhere, how the births of the children went, if there's retirement or college money, what restaurants the Matron likes or what books she's been reading.

Her mother never asks.
Posted by Minnesota Matron at 7:30 AM 45 comments:

And just think . . . all it took for the Young Miss's deflowering was wine.
Posted by Minnesota Matron at 9:47 AM 15 comments: