The Matron is the unfortunate and complicated situation of selecting both a Junior High School for next year's seventh-grader (Scarlett) and a High School for the He Who Remains Invisible and Nameless otherwise known as HWRIN, pronounced RIN.
Scarlett requires a special path be paved and she has had several, mostly satisfying, conversations with school principals who promise theatrical support.
But she recently experienced this special conversation while phoning Como Senior High School.
Matron: "Hello! I'm calling to see if there are any tours of the school planned."

Secretary (?): "We're not scheduling those until February."

Matron: "February! The forms are due in February! Other schools are already doing tours."

Secretary: "Like which school?"
Matron: "Ramsey Junior High school tours start on December 9 and run every Thursday through February."

Matron: "Yes, they are! Again, the web or phone will confirm."

Secretary: "They're a charter school. That's different. We're a district Senior High School and those aren't having tours or meetings until February."
Small beat while the Matron rips out all of her hair, throws the phone and screams while shaking the skin off Satan's Familiar.
Matron: "Actually, another regular District Senior High school that is an EXACT MATCH with your school, Central Senior High School, has an informational meeting for parents on Thursday November 19."

Matron (wondering why she herself was SO invested in this bloodletting): "YES THEY DO!!! I'M GOING TO THE MEETING THEY ARE ACTUALLY HAVING!!"

Secretary: "But they have an International Baccalaureate program so that makes them the only school doing tours."

Secretary: "Actually, we have a tour scheduled for prospective parents and students on Friday morning, November 20 at 9 in the morning."
Here, the Matron wonders what kind of orbit this woman lives in and if one is required to arm-wrestle for envelopes instead of simply asking.
Matron: "Thank you."
Universe to Matron: Do you want to deal with this woman or people who tolerate this behavior for the next four years? Guess who hadn't the stomach for the tour, if it truly existed.
Got a special customer service nightmare to share?
Posted by Minnesota Matron at 7:40 AM 15 comments:

The Matron will admit to occasionally living in a blog post.

Here she is, standing in line at the supermarket, composing the scene in her mind: "The Matron is the impatient sort and today's drill did not please."
Here she is, reading a student essay, composing the post in her mind: "And because tea comes from China, we should now have accents?"
Here she is, engaged in canine mortal combat, composing the post in her mind: "It is actually possible for a dog to jump three feet in the air in order to snatch a sandwich out of a TALL child's hand if that sandwich contains meat."
That last one was the foster dog, the Jack Russel terrier named Snappy and required a wooden spoon wrenched in his his jaws to open the mouth and pry out the sandwich. That Merrick then requested to eat.
Anyhoo--this blog post isn't about Doggie Drama, exciting as it might be. It's about the blog. Because the Matron has been pondering Blog Ethic=Blethic. She thought that word up. She's so creative!
Recent comments inspire the Matron to say this: This is CREATIVE non-fiction. This means that while mostly stuff here is true, she gets leeway. In fact, her stepmother knows this so much that she knew enough to email and inquire: "Is Scarlett REALLY auditioning for a major motion big time Hollywood picture or are you just messing with me?"

Really. Filming today, actually. Send luck.
This brings the Matron to the Stage Mother thread. Does she really honest to God-Buddha-Oprah-Allah-Universe think that her child A) has enough talent to star in a major motion picture and B) will actually get in one?

No and No.
That's the Mary real person. But the Matron does indeed love a narrative arc and Stage Mother offers so many options! So many delicious delights! But some of those delights could involve a pretense or pretension that doesn't actually exist. Because there is a real life child involved with colleagues, friends and family who sometimes read this blog (hi honeys!) the Matron tries not to mine this vein too much and to keep it more or less real. More or less. Most likely, sorta, sometimes! See how that CREATIVE nonfiction confuses!
Trust her -- she could really get out the claws and wig this one out. But it would be really truly fictive. Because guess who is the person upstairs watching the original movie that is being remade? Who memorized her lines and rehearsed? Who forced her mother to call the casting agent regarding wardrobe?
"MOM WHAT TIME ARE WE LEAVING?!!!!!"
Guess who has desire? Fuel. Juice.
The other Blethic consideration is the journey. Outcomes are completely unknowable and out of one's hands. But the journey? All hers. And parenting is a journey that takes unpredictable directions. Her particular journey just so happens to include that daughter and her desire and drive. And it also includes the son who will not be blogged about, the teenager who has given his mother ONE PRECIOUS WEEK of prose devoted to him. The week ends today, neighbor. So there is no snitching.
What do you you do when you're a writer and you write about your life -- are even working on a book of essays about said life-- and one of your children declares him or herself off limit? This is a real-life Matronly Mary dilemma. For the moment, she is granting Stryker his wish and taking him off-line, starting tomorrow (sorry, Stryker fans!!). But she has told him that children do not dictate to parents what they can and cannot write about. She promises him that she won't share HIS personal story but she is sharing hers and sometimes, his story intersects with hers. That's as far as she's going.

Sound right?
The third person narrator is now signing off, having fully fleshed out Blethic that had been bothering her.
Oh wait -- while she can still say this: how many 13 year olds can sell their laptop online and use the money to buy parts and components in order to build his or her OWN new computer, nearly entirely by scratch in a process involving drills and wires and software construction?
That's the sort of brain she's contending with. The end, Stryker.
Posted by Minnesota Matron at 1:53 PM 5 comments:

The Matron always reads Sunday's Vows with her morning oatmeal (okay - let's pause and consider oatmeal for a moment. This isn't just any oatmeal,people. You put in a handful of organic blueberries, a dollop of peanut butter and raisins -- now you're getting the picture).
But this Sunday's column on Laura Straus and John Alexander gave the Matron pause. In the midst of a long article on the couple--how they met and courted and wed - came this:
"Mr. Alexander . . . told of the trauma of having left his wife and family in June 2005."
The phrasing makes it clear--if decorous--that Daddy was the one who did the ditching. He bailed. And in that line ''having left his wife and family," the Matron could only feel the pull of their story -- the wife and children he left behind. The children (and she's assuming that family referred to that ilk rather than a dog) never make an appearance in the paper.
Here is the Matron, toasting the happy couple? Better yet, a nod to the people he left behind. HIS trauma? Indeed.
Second really wildly unrelated and probably less popular note on language! The Matron has recently been struck by difference in tone. She is not insinuating that everyone with these views uses these phrases but she is saying she HEARS them from some.
Baby Killer ----- or abortion rights activist? 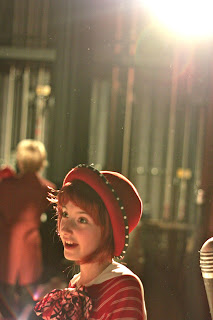 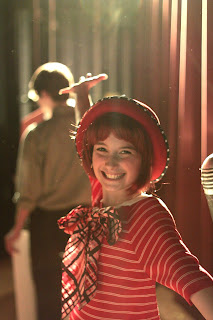 Photo by George Calger. Photo with the red curly hair coming when she gets them! It was impossibly adorable.
Posted by Minnesota Matron at 12:28 PM 23 comments:

Something coming later today, she promises! It's been a busy and bittersweet spin the past three days. . . . but the white space of her blog has been haunting her!!!
Posted by Minnesota Matron at 4:53 AM No comments: