That title deserves a heavy metal background. Provide your own.
The Matron has refrained, thus far, from blogging about a particular miniseries in her life -- out of respect and consideration for the person at the center of the storm.
Oh well.
A couple of months ago, the Matron and her family took in a 21 year old house guest. Let's call him Joe. Eyes wide open, she knew this theater friend of Scarlett's had no place to live for a reason: he had more than his fair share of hard-luck, including no money, a nominal job, and minimal life-management skills.
Still. A good soul. So the Matron and her husband gave this young man a month in their home. Two weeks in, she realized the circumstances that left him roofless were not being transformed. Yes -- he was successfully enrolled in college but conquering that corner of life was the extent of his capabilities. Doing college AND earning a livable wage in a stable unit he paid for was genuinely beyond his reach.
Joe had no car. The trek to his six-to-ten-hour a week retail job required an hour bus slog each way, frequently meaning he had to rise at 4 am for a 6 am start.
Someone has to stock those shelves. And he would be Joe.
As far as the Matron could see, he was making no attempt to: A) find an apartment B) find a closer job C) Find a job that would give him more than ten hours a week and a sustainable income D) Locate any resources or people who might help him E) Find a roommate or dorm
Matron to Joe: "If you're going to move out in two weeks, you have to start laying that groundwork now . . . looking at ads, talking to people, getting a better job."

Joe: "I KNOW! I am just so busy!"
The Matron knows busy. Joe wasn't.
Matron: "You only get about 6 to maybe 10 hours at your job. Maybe you should get a job where you can earn enough to rent an apartment?"

Joe: "I KNOW. I'm just so busy, it's hard to even look."
Joe quickly dissembled every rule of decorum that the Matron had outlined the day he moved in. Middling and annoying -- just a steady stream of being late with the borrowed van, disappearing overnight without notice, not lending a friendly household hand and, not infrequently, laying in the middle of the family room floor or a hallway so people had to step over him while he slept.
After a surge of anger, she realized that she got in Joe what she hadn't experienced in her own teenagers -- simply staggering maturity and untapped life skills. Except he was 21. So the Matron softened, understanding that he really was about 14 and learning how to manage his life in fundamental ways.
The stay was extended another two weeks.
Although not unhappy about his eventual departure, the Matron didn't really mind Joe and his haphazard ways. Just another big kid in the house. Kid indeed -- he would spend hours hanging with Scarlett and her friends, happy to chat with 8th grade girls. Big happy family scenes with the Matron, her husband and other children in and out of the family room, but Joe a fixture, chatting and laughing with the girls whenever they were around.
Are you getting those warning signals? The Matron thought it ODD that he had no adult friends or interests.
She didn't leave him alone with her children or anyone else's. But she forgot -- she who blogs and teaches online - FORGOT ABOUT SOCIAL MEDIA.
Another person's story (someone she actually care quite a bit about) starts here so she's going to omit every Pertinent Detail, all sort. But Joe? Well. There's another story --and where his story meets hers: fair game.
Let's just say that Joe-- acting stupidly, without malice, in his strange "14-year old 21-year old" way - managed to shred all semblance of acceptable (and perhaps legal) behavior through inappropriate (and possibly illegal) relationships, online.
Relationships that originated when the parties involved met . . . . . you guessed it . . . at the Matron's house.
Reader. If you can imagine the cellular constitution of self-recrimination, rage, self-blame, remorse, horror, and shame you may begin to APPROACH where the Matron sat for three long days. She had forgotten what it was like to be physically ill with emotion but got an unplanned for refresher course. Which wasn't free.
Complicating matters, Joe really didn't see what was wrong. Sure, he understood how the online conversations looked from the outside -- but it was all done with friendly, innocent intentions. Joe fundamentally could not grasp the moral repugnance of his behavior and its far-ranging consequences.
Neither could Joe grasp the gracious 'out' that the Matron offered him when she 'suggested' rather than demand his immediate departure. Stupidly, when he moved in she promised she would never just kick him out.
The day he moved in, Joe said: "These things always ends badly."
Matron: "Not this time, I promise."

Silly, silly Matron. She ignored that little voice lapping: maybe there's a reason it ends always ends badly.
The night the crisis cracked, she remembered the child inside the man so she offered that perhaps instead of staying for two more weeks, Joe should take a day or two and secure another option. No need to rush out the door, but well - the door sooner rather than later.
She was relieved when he didn't return for a night, assuming he was working on Plan B. He wasn't. The next day it became apparent that Plan B was, well, staying.
Matron: "Do you see that staying here has only negative consequences for us and positive for you, but leaving has only negative consequences for you."

He did see. He stayed.
But the next day, the Matron had her own Plan B which involved car keys.
Matron: "Joe, I am going to drive you to X's house. Right now."
Joe: "Okay."

And just like that -- twenty minutes of packing -- and he was gone.
That's not the end of the story, she's certain. The people involved are still around and disaster doesn't end abruptly -- it yawns and stretches its arms, taking up space for a while. The Matron initially didn't blog about the miniseries because she fully anticipates the Worst Can Happen and Joe will find this blog. Or someone who knows him.
She's still afraid of hurting someone's feelings!
But her mental stability -- such as it is -- required her to take that risk and shake some air into her psyche.
Don't turn off that heavy metal anthem, just yet. Because the guilt and self-recrimination still stare at her in the mirror every morning. And fear -- about what might have been.
Posted by Minnesota Matron at 10:57 AM 10 comments: 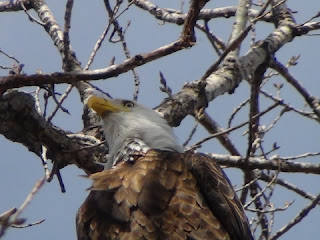 One advantage to living on a bluff along a river: the eagles have landed. This picture? Taken right from the Matronly balcony (she's JUST like Juliet in so many ways). For the past three years, winter marks its end with the eagles' return. They nest just down the street from the Matron and produce two to three adorable eaglets a year.
Their nest, big as a child's wading pool, is a tourist attraction.
The Matron doesn't have to walk down the block to snap her pictures. This tree is their second favorite spot in the 'hood -- a tremendous cottonwood visible throughout the city. Just find the tallest tree on the eastern landscape and it's hers. Not really. Nobody owns this beauty.
And every day, the Matron watches two eagles circle through her yard. Possibly scoping out Satan's Familiar as supper, but well, who is she to mess with Mother Nature?
Completely overcome by all this evidence of spring -- thundering cottonwoods, thawing yard, sprouting greens, nesting eagles -- you name it, it's growing or melting -- put yours truly in a March sort of mood, as in Spring Cleaning.
Given her extensive online life, she thought she would start with electronics. Why get all exhausted scrubbing walls when you can cozy up to the computer (with cookies and coffee) and still clean?!!
Specifically, the Matron was bothered by a vague, back-of-the-mind awareness of online accounts trailing in her wake, of computer files stored with the exact same system she uses for socks called "toss in drawer and shut tight."
So she poured that coffee and raided the chocolate chip cookie stash, settled in all comfy and confident. By lunchtime, her computer would be pristine! Accounts ordered, files stored, projects organized-spring season off to a sturdy start!
Lo and behold, the Matron found 67 accounts trailing in her wake.
Weebly? Dvolver? Anyone know how to use these? Sixty-seven accounts with a staggering array of user names and passwords, meaningless deceptions meant to trip up hackers (like there's a legion lined up to get her) that only made her task, well, unpleasant to impossible.
Utterly defeated --and without passwords for a few vital entities, including the dusty Matronly facebook account -- she turned instead to her computer files.
There are 17,512, not counting system files.
Wait!? What's that? Uh . . . excuse her. Those dirty walls are calling.
Posted by Minnesota Matron at 7:46 AM 3 comments: