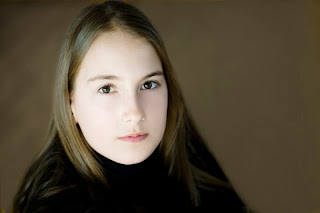 Scarlett, you are growing up. Today, you turn 12. Your mother is astounded that a decade and two years have transpired since you entered the world. 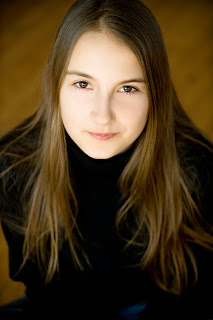 This year, you endured some hardships. All you want to do is be on a stage somewhere, with people clapping. But your fall and winter seasons were unexpectedly cancelled --and suddenly, on the cusp of Junior High with all those changes -- your identity and vocation were in the balance.
Retreat to bed? Cry or worry? Instead, you asked your mother to get you auditions, quick. Now that you're the lead in this show and immediately afterward have a nice role in a very cool adult theater, you seem much happier.
Still, your mother knows you're worried about what's next -- because there must be something.
There's a big movie audition ahead but you toss that off.
Scarlett: "If I get in, great. If I don't, I'll have fun at school. Either one is good." 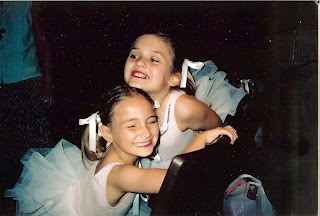 This was your first time on stage. Check out that face, moments before curtain. Uh, can we say the opposite of stage fright? Joy! 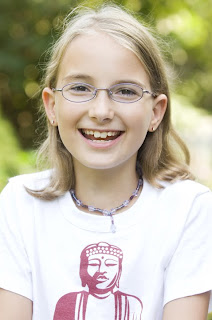 The Matron thinks the above actually came from your eighth birthday! (Isn't she adorable?!) Your brothers should thank their good lives for your existence. Why? When your Mama was a Youngish Miss and newly pg with your big brother, she decided to find out the baby's gender. 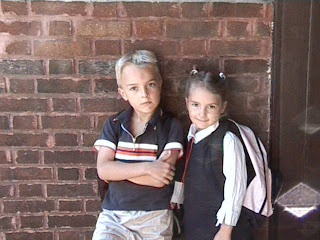 You know what THAT answer was! Look at that boy glare at his Mama! The big red forehead tattoo would be his suction cup marque. The child decide to deform himself before the first day of school. But see how sweetly the daughter is smiling on her first day of first grade!

Way back, when the ultrasound technician innocently told her that her firstborn was to be a boy, Youngish Miss tried hard for repose. She burst into tears. Because she wanted, this! 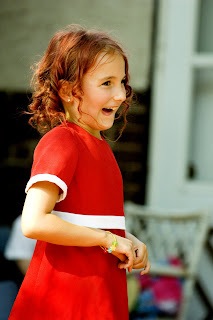 Not even necessarily Annie -- 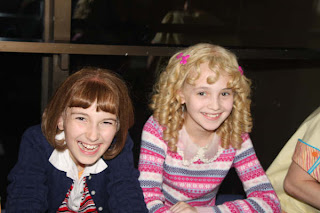 Or Ramona or Helen or any of the roles or an actor. Sure, Scarlett, the Matron can thank you for some stupendous-can't-beat-em cocktail party lines: "My 11-year old has agents in L.A. and Minneapolis." But she knows that's pretty much smoke on the water.

She's happy you know that, too.

No, your Mama simply wanted a daughter--a girl who would be kind to animals and brothers(sorta related). Your Mama harbored dreams of a reader, a girl with books permanently stashed in the leather pouch she carries everywhere. She wanted to meet a fierce spirit--a girl more fearless and confident than she was when young. Your Mama dreamed of the kind of girl who would, gracefully, set aside her plans for her 11th birthday because another family needed a great big helping hand-- a real emergency -- and suddenly there was a surprise overnight and two tiny tots in the house on the actual bona fide anniversary of your BIRTH and instead of complaining? This daughter would play stuffed animals, tag, and help - - all day.

That's exactly the daughter she got. 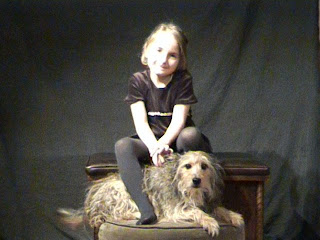 Monday, in honor of your birthday -- and the dizzying potential your big beautiful life holds-- four of your best friends from elementary school will be participating in a "Red Carpet Hollywood Party" tomorrow night, and probably stay awake until the wee hours. You have asked that in lieu of presents, your friends donate any money they might have spent to a homeless shelter.
Twelve is the cusp, my dear. You are not yet a teenager nor are you a small child. The world is suddenly both open and mysterious. Your mother is amazed by your generosity of spirit and strong friendships. Never once have you been anything other than kind and patient --and continually fighting for the underdog, wherever you may find him/her. If there is a mean girl culture, you are not only not part of it, you're an active opponent.
Scarlett: "Mom, everyone is mean to Shaquita at school. Is there a way we can help make her feel more a part of the classroom community? Could we invite her over with some other friends to help everyone get along?" (actual words).
You're a person who organized a play with 30 child actors at age seven --and demanded that no parent watch a rehearsal! A person who is considered by local adult actors a "colleague" and not a child actor. Even better, you know when to play with your little brother and when a dog needs a little extra love. Plus, there's that extra Uterine Tracking Device (UTD) in the house.
Stryker: "Where's my iPod?"

John: "Who took my wallet and cell phone?"

Scarlett: "Living room coffee table, backyard in the left corner by the roses, on your dresser."
Happy Birthday, Scarlett! It's quite a ride. Your mother's greatest gift is that she gets to tuck you in every night and listen to your dreams.

Posted by Minnesota Matron at 8:57 AM 14 comments: 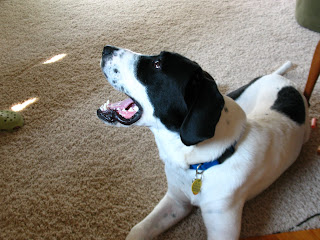 Meet Denaro.
He is giving this dog a run for his money as Satan's top hench'man.' 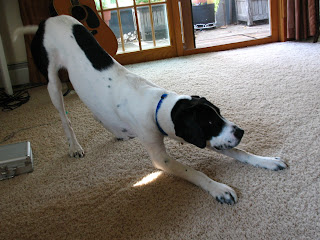 Denaro is a big boy. But that doesn't stop him from doing small dog things like climbing ON TOP of the kitchen table so he can more conveniently devour everyone's dinner, knock over the flowers and slobber on the stack of books.
No surface is safe.
Satan's Familiar is of the mind that no surface on his own scruffy body is safe from Denaro, too; S.F. is striving to create a stronger, more durable definition of 'lap dog,' because now that's where wants to be. 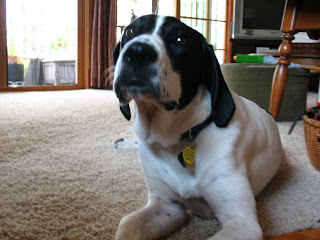 So far, Denaro has made Scarlett cry three times and Merrick seven. Not that anyone in her household is anal enough to track these sorts of things. One exuberant jump onto a lap is like a tsunami. With claws.
Now, this is a delicate topic but the Matron --who runs daily with her dog(s)--is accustomed to picking up well-formed, dainty doo left by Satan's Familiar. This drops easily and tidily into a bag, is deposited in yet another bag (her hands cannot come into contact with this substance or she will find one more reason for that institutionalization list) and then dropped into the nearest public receptacle.
Denaro? She thinks a horse is somehow actually creating his poop, sending it through a special Messy Goop Bothers Mary Machine and transferring that substance into the dog's intestines. of course, all that ravioli, milk, oranges, salad and cheetos he ate are a core element of the Messy Goop Bothers Mary Machine.
Matron: "Denaro? Do you want some pudding to go with your cheese sandwich?"
Sometimes she questions her systems of analysis, logic and lifestyle. She paid $350 to purchase an animal who will then eat or attempt to eat $100 worth of groceries whenever possible? Not that she's counting but this could impact the college funds (if they existed in a substantive way).
But Denaro has been adopted three times and returned to the rescue shelter all three; he was nearly 'put down' at the Humane Society the first time he was there. His high energy level, bountiful size and exercise needs rendered him difficult for his former families.
This commitment?
Denaro, honey, it's for a lifetime: yours with us! Welcome to the family, big guy. And pass the butter.
Posted by Minnesota Matron at 9:20 AM 7 comments:

Yes, dear readers -- there is much to say. Stage Mother is returning this week (full of angst and a new busy schedule), the Lice Chronicles are moving into syndication, and then there's the enormous puppy who is able to climb onto the kitchen table and eating everything. And then vomit.
What a fun week ahead!
But tonight, the Matron is more somber. She's sitting here at the kitchen table, pondering the aging body.
Earlier today, one of her children came barreling into the bathroom, where the Matron was recovering from a shower (recovering because the hot water didn't really work all that well -- more fodder).
Matron: "Hey! I'm naked. Just a warning."

Anonymous Child: " OH MY GOD DON'T MOVE I Am GETTING OUT OF HERE!"
The horror quite literally bounded off the walls and all parties were involved in projectile terror.
She knows it's normal for children of a certain age and gender to run screaming from any body part not visible on the beach. But still -- what about the owner of the offending body?
Now, your intrepid narrator is a wee thing -- she weighs in at the very low end of the scale. Yet. . . .
There's that tire around the belly.
Breasts? Formerly pronounced. Now saggy acorn bits with sponge texture (and much smaller than anything you would use to clean the sink).
When she was a Young Miss, the Matron was aglow and basked in the delights of the flesh. Now, she mostly tries to hide it with pretty candles and just the right degree of exhaustion.
Now, she looks at lines in the mirror. The sagging skin. Notices how 'not noticed' she is anymore.
And it's not fair to stay the same weight for 25 years and have a stomach bigger than your breasts!
Growing up is hard to do.
Posted by Minnesota Matron at 8:22 PM 9 comments:

The New Kid in Town

There is one.
He is a sixty-five pound, seven-month old puppy and he joined the Matron's family yesterday around noon.
Satan's Familiar moved in under the kitchen table and hasn't left.
The new dog is mostly some kind of hound dog (with a little lab) whose energy level has meant that he's ripped through three adoptions and two foster families. The Matron simply handed that beast over to He Who Cannot Be Named and Merrick. All three slept well last night.
Dog's Foster Mom: "Oh, I feel like this guy just won the lottery! You all work from home, three kids, fenced in backyards, you're a runner! This is just idyllic!"
After she left, the vomit and fights began. The dog instantly ate compost. This was not a good idea.
Merrick: "Can I wide him?"
HWCBN: "Can I give him a bath?"

Merrick: "Can I set up a cawt behind him?"

Oh the love fest. The Matron predicts this will last approximately 48 hours and then guess who will be picking up horse-size poop in the backyard?
Not her.
But she'll be the one forcing someone else to do it.
This morning, the new dog tripped the light fantastic with the Matron, along her side during the daily run. She also fed him. She gave him treats and rubbed his belly. He follows her everywhere.
Satan's Familiar remains under the kitchen table, cowering in fear.
HWCBN: "MOM!! You are bribing this dog to love you most!"
Matron: "Bribery is my actual parenting strategy and it works well for animals, too. If you want to rise at 6 am and feed and run the dog, he will love you best. I promise."
A few minutes of meditation.
HWCBN: "If you're bribing us, when was my last big payout? Don't you think I'm due?"
Matron: "Your last big payout is in the living room chewing Dad's wallet."
Pictures coming tomorrow . . . now she just needs a really kick-ass name. Ideas?
Posted by Minnesota Matron at 4:41 PM 9 comments: