The Matron is not a big fan of nature. Deer? Seen one. Trails? Yup. Hiked a few. Canoe? Um, her feet might get wet.
Give her an espresso or cocktail--say in Paris, New York or even dear little Minneapolis -- on a sidewalk cafe with a book by her side! That's her idea of travel.
Oh, how she sacrifices for these children! Children who adore the Outdoors, who like nothing more than open space and hours to wander through weeds, water, forest, swamp and dirt.
So the Matron is off communing with nature for a few days. Cut off (sob) from the internet.
She'll return here Sunday, clawing her way home and grasping the dirty hot city pavement like a life line.
Posted by Minnesota Matron at 2:42 PM 7 comments:

Labels: please, Save her from those damn squirrels

While Merrick was Looking at the Moon 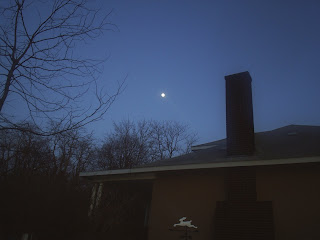 It is late. Merrick can't sleep and the Matron cannot blame him, the night is that perfect. She tells him a story about the house they used to live in, before he was born.

They are snuggled and warm. There's no better place on the planet.
Merrick: "Mama? I don't like to talk about befowe I was bown. Can we stop now?"
Matron: "Sure, honey. Why don't you like to talk about before you were born?"
Merrick: "Because it makes me think about the 'aftew I die' pawt. It scawes me to think about when I'm not hewe. Sometimes I get a vewy bad tummy ache with that scawe."
ping goes the maternal heart!
Matron: "Me too. Everybody's scared, some of the time. But here's one wonderful thing: you don't have to worry about dying for at least 80 years! That's a long, long time. Dying is very far away."

Merrick: "Weally?"
Matron: "Really. Most people live to old age. You will too."

ping! goes the maternal heart!
Merrick: "Please?"
Matron: "As many as I can. Promise."
Merrick: "Can you stay with me until I fall asleep tonight so I won't be scawed about when I'm not hewe? Please?"

So she stays. And she thinks about history while her son yawns and slips away in her arms. She thinks about the countless people who are now where Merrick fears to be -- not here. Millions of people -- lost now, nameless, ordinary folk like her -- people who were once doing just this: holding a child and watching the moon.
She is grateful that it's her turn for this little while.
Posted by Minnesota Matron at 3:28 PM 13 comments:

Art, inspiring the Matron yet again. Here's to harmonies in our lives, all sort.
Posted by Minnesota Matron at 8:59 AM 4 comments: