Happy Birthday, Stryker. Today you made your mother the parent of a teenager. You often spend your time stoking the fires of Hell, like this.

You are now as tall as your mother. Which is not saying all that much. 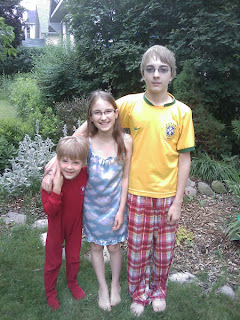 And creating monsters. What a lovely couple. No wonder that damn dog tries to take each of his meals at the table. 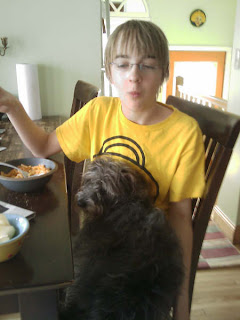 Last year, the Matron wrote a really good blog post for your birthday that was actually, well, all about HER.

But this one's for you, babe. You're smart. Funny. One of a kind. 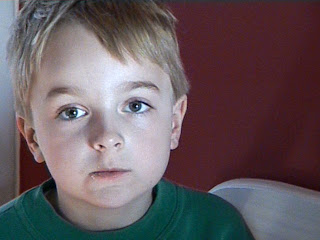 Tonight, there are 9 thirteen and fourteen year old boys bumping about in the third floor family room, in tribute to your birth. The Matron can hear them as she types. Bump, bump.

Matron to John: "I'm so impressed with Stryker's friends! They're so responsible."

John: "No they're not. They're completely stupid. They're 100% aligned to make the worst choice possible and not have a clue about what they're doing."

Guess which one of them will stay awake until the wee hours, listening. Thanks, honey.

Stryker? Happy birthday, sweetheart. She's awfully glad you're hers.
Posted by Minnesota Matron at 10:11 AM 5 comments:

The Temple In Which She Dwells

She takes that first stanza and pits it against the Buddhist concept of loving kindness. which requires first and foremost a full and unjudging acceptance of what's in front of you -- even if that's a pair of marshmallow textured breasts with acorn nipples.
She takes that first stanza and pits it against everything she hopes for her daughter. An embodied joyful existence.
Buddhism reminds us of how easily we cling to our misconceptions and judgements. It's hard to let go of hating if hating is a long time practice that constitutes the self.
Hate your hair, face, breasts, bottom, toe nails, tummy?
Last week when the Matron practiced loving kindness, she was startled by how little of that impulse was left over for to herself. Indeed, she leans a bit toward the battle of the flesh bent.
But today, she has decided to move into a temple. The battlefield is getting a little stale. She can't change the chaos around her or right the world's woes. No. But every time she has a judgemental thought about her aging maternal body, she can immediately replace that thought with this: Thank you.
Posted by Minnesota Matron at 12:59 PM 10 comments:

When the Matron is Pushing Her Wheelchair. . . .

Six days a week, the Matron runs four miles. The seventh day she doesn't go to church but sleeps until the drool has crusted on her lower lip.
Yesterday on the run, she noted an exercise walker. This walker was unusual. Clearly, the huff and puff and exertion of his face meant this was serious walking. But the man? Pushing 90, rounding a corner near an assisted living home called the Marian Center. He was nearly bald, bone thin, big wire-rim glasses and a hearing aid meant to reach Japan. Moreover (love that word!) he was pushing an empty wheelchair as he walked. The Matron couldn't comprehend if the wheelchair was assistance or weight training. But she smiled as she ran past him.
Fast forward three miles (for the Matron). The Matron is a good two miles from the Marian Center, near her home. She sees the SAME elderly man, shuffling his wheelchair very very very very slowly. Something in the slope of his shoulders makes her throat catch.

She jogs up beside him, slowing to his snail's pace at a corner.
Matron: "Excuse me, sir? Are you okay? Can I help you?"

Elderly Man (surprised): "Why, I'm lost. I don't know where I am. And unfortunately for me, I don't think I can walk any more. I live at the Marian Center."
Matron (All mama care-taking mode): "I'd love to take you home. Let me get my van and I can give you a ride."
The man sighed, spent, and gave over his life to a stranger. The plan was established. He'd wait there whlie the Matron retrieved her van.
While the Matron was dashing home, she realized that at THIS VERY MINUTE Merrick was being released from a city sponsored tennis program. City sponsored meant he was pretty much shoved onto the street in a neighborhood known for, well, chaos and mayhem and murder.
She needed to be in two places at once.

Thank God-Buddha-Oprah-Allah-Universe, one of her neighbors (30 something) belongs in that line-up ofdieties. He's a hulking man's man who works on the railroad, as in riding on actual trains while wearing overalls.
And he was right there watering daisies in his yard when she panted up, spewed her story and said: "Do you want to drive Merrick or the wheelchair?"
He picked wheelchair and the Matron felt compelled to risk Merrick's life long enough to introduce them.
So the Man and the Matron jogged two blocks to the waiting elder. The Matron was all "coo-coo" and let's take care of you to this elder. Then she introduced him to the Man.

Man (holding out his hand for the handshake): "Hey, bro. I'm Chip Moe. That is one bad set of wheels you're packing."
Old Man (holds out his hand like a 20 year old): "Richard Moleski. You know nothing about wheels. Give me a '62 chevy and we're talking."
And they fell into it, men, just like that. While hoisting the wheelchair into the truck.
Then Richard Moleski grabbed the Matron and gave her a hug: "Sweetheart. I was a little worried. Thank you."
Posted by Minnesota Matron at 8:24 PM 8 comments:

That woman, she said, could rattle a birdrght out of the sky; that man

could spell a row of corn backwards

and forwards. Their children (all ten of them)

could tell you how to add leaf ot branch

or divide the sky cloud by cloud.

They were a talented family,

a most gifted group.

And when they wanted a vacation,

they painted a wall full of mountains

and climbed the highest ones,

they carved a coastline along the sidewalk

so that they could gaze out to sea

beyond the garage’s shore.

They could sing harmony to a song

that was only, just then, being composed.

They believed in things that no one –not

even God—would have asked them to believe.

They knew how to keep stars

shining and they still do.

The Exhausted Late Night Nod to the Blog

The Matron is spent.
It is just 10 pm but her brain wattage is experimenting with senility.
Tired.
Stage Mother has been waiting in the wings! Down, Gypsy Lee! But the Matron must wait for tomorrow to capture those complexities. Right now, her brain is about as functional as a pineapple.
Which brings her to this blog post. Remember the older child, lobbying to change his name?

Yesterday, he went to a friend's 13 birthday party and brought a gift that he has identified as his signature-- a birthday calling card of sorts. He carefully wrapped up a $10 bill and put it in a baggie. Then he cut a hole in a pineapple, inserted the $10 in the center of the fruit, and plugged up the hole with the pineapple peel.

Thinking this not sufficiently distinctive, he took said pineapple outside and spray-painted it purple.
His plan is to present pineapples to all his friends turning 13 this year with a card that says: "Enjoy." And say no more.
And the Matron wonders why she has troubles with Direct Communication?
Posted by Minnesota Matron at 7:55 PM 10 comments:

Labels: Blethic because care of the blog means posting when you're fried. More on that state, tomorrow

Yesterday, the Matron practiced Loving Kindness. This is the Buddhist tradition of approaching every moment – each cell! every hearbeat! each glance! – with loving kindness. You know what those words mean.

She was interrupted five times during breakfast with this:

“Where is the syrup?”

“I dropped my napkin and I can’t find it!”

“Are there raspberries in the fridge?

Each time, she got up and answered the call. She didn’t roll her eyes or snap someone else to attention. She left her own cereal untouched.

She put down the toilet seat.

She wiped off the spit stains from the bathroom mirror.

She did not look in the full-length mirror with a critical eye.

She answered the phone and said: yes.

She spent much time sitting with her children, listening without judgment.

She washed her hair well and added rose water to the rinse, enjoying.

She gave the last piece of grilled salmon to her husband.

She listened patiently to the telemarketer’s spiel before declining.

She asked her mother for all possible stories about the dog and cats and tried her best to truly listen.

She pitted yesterday's sweet and satisfying experiment against the frenzy of a normal day and realized how most of the time she says: No.

Posted by Minnesota Matron at 9:23 AM 15 comments: