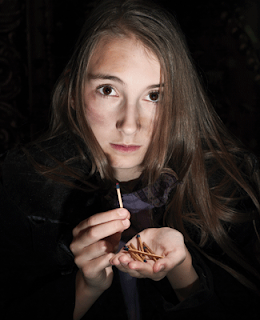 Scarlett, tonight you open yet another show. This time, you're Lizzie, the little match girl in The Match Girl's Gift at the Minnesota Centennial Showboat.
Now, the Matron has blogged as Stage Mother, many times. Indeed, she has a standard 'break a leg' post that she's abandoning because the read has become too long. Yes, yes: she knows blog readers have about a two minute attention span per page and Scarlett's theater journey is now more novel than novella.
Blog readers: why are we so fickle? Yours truly includes herself in the fast-reading crowd. Give her three minutes a blog and she's happy.
Anyway, this opening night is special to your mother. Not just because it's on a boat (which is pretty cool), and five minutes from the house (even cooler, perhaps) but because the energy and idealism of the young artists (okay, she thinks being in your twenties is young) is contagious. There's something special and dynamic about this group of people; she thinks your show will reflect that energy and integrity.
Plus, it's your mother's birthday. Don't remind her of the exact number of years she's celebrating. Sigh . . .
Also, Scarlett, your mother was proud of you today. You were offered a lead role -- Jiminy Cricket in Pinocchio --and after much agonizing, turned it down so you could audition for another theater, Youth Performance Company, a place you love beyond all reason. Well, there is a reason. It's 'youth' and 'performance.' What better summary for your life thus far?
Even knowing there are no guarantees -- indeed the chances of getting into the next show are always small (there's lots of rejection, even with success) --you opted for the integrity of saying no to Pinocchio at the get go, rather than signing on and perhaps resigning a week later.
Matron: "Could you just say yes to Pinocchio and then if you get into the other show, back out a week later?"

Scarlett: "MOM! I would never do that. Once you say yes, you're in. That would be totally unfair to the other theater."
Good for you, honey. Your mother hopes you keep that spirit with you for the rest of your life, in all your endeavors.
And break a leg tonight. She'll be in the audience, cheering you on and reminding herself that she was present at your birth, so she knows a child of hers can actually harmonize in front of hundreds. That's your father's blood.
Posted by Minnesota Matron at 1:19 PM 7 comments:

Hey friends,
As someone not unfamiliar with shameless self-promotion that extends to her children, check out the diva's blog
And -- Happy Thanksgiving to all. The Matron tends toward the yearning and unrealized side of life, but is going to give the happy warm grateful thing a go today.
But she hopes everyone who visits here is surrounded by love and warmth today. And too much food.
Tomorrow it's all about shopping so enjoy the respite. Okay, there's that cynic rising again.
Posted by Minnesota Matron at 7:13 AM 9 comments:

So here is the Matron, driving down the freeway.
There's a big roadblock. Traffic comes to a stop. She curses the planet and pulls out her cell phone: half an hour to the next class!

People! Get out of her way!
Finally, her mini-van (still cool because of the peace signs, Dodge) is able to inch by the obstruction.
A hearse.
Overturned jeep, people weeping and wailing. And the Matron was struck by the fact that she felt 'inconvenienced.'
Fourteen years ago, the day before Thanksgiving, the Matron's father died. Her brother and sister hadn't laid eyes on him for a decade. But the Matron, then a Young Miss, was a steady presence in his life.
So today -- approaching the day of gratitude and the birthday, she's somber. And very grateful to be here, and fully aware that some day, she won't be.
Posted by Minnesota Matron at 9:33 PM 2 comments:

Labels: Mary in a somber mood and one more reason to never believe these lables

Merrick: "Is there weally a Santa Claus? A weal twue Santa who brings pwesents?"

Matron: "Santa isn't quite what you think. Don't imagine a big fat guy in a red suit. Santa is different. He's more of a spirit. A collective entity."

Matron: "We're Buddhists. There is no God."

Matron: "Where did you hear that?

Merrick: "Gwandma. And my fwiends at school."

Matron: "Okay, can we talk about Santa?"

Merrick: "But do they wide in the same sleigh on Chwistmas night?"

Matron: "God doesn't ride in a sleigh, if he exists."

Merrick: "Weally? How does God get awound?"

Matron: "Can we go back to Santa?"

Matron: "They're both amazing but I'd give God the first ticket."

Merrick: "Are God and Santa bwothews? "

Merrick: "And God and Santa will be with me."

Matron: "How about the tooth fairy?"

The Matron cannot quite wrap her mind around the fact that on Friday she marks another birthday: 48.
People. This is almost 50.
Yours truly does not even feel like a grown-up, yet alone the elder statesman she is about to become (and let's posit that statesman is a gender neutral term). She has not one single slice of gray hair and still slips into size 14 boy's jeans. Pop culture? On it! Latest technology. Got it. She's the queen of online teaching at her college and is more comfortable in front of a screen than an actual human body (sorry, John, for all that this tendency might imply).
Long ago, when the Matron was a Young Miss she served a brief, memorable and deeply disturbing period as a secretary. This was right out of college. Here's how good she was at that job. Every week, she received a stack of computer generated reports. After discovering that nobody knew to whom these reports should be distributed (and we're talking a foot high each week), she found an empty closet and just started stacking them there. Where they stayed until her brief tenure as a secretary ended. They might still be there.
Her duties involved supervising people triple her age -- really. In retrospect, she is truly sorry for that slight. Can you imagine having a 23 year old being your boss at an institution you've been in for twenty years? But one of these women was very wise.
Young Miss: "Oh my GOD. I'm turning 24!! I can't believe I'm getting so old!!"

Wise Fellow Secretary (probably about sixty at the time): "What's the alternative to aging? I'll take the numbers and be happy I'm here to see them."

Now, the Matron has never forgotten that. As a cancer survivor and someone living with an autoimmune disease, she understands the trials of the body -- and its ability to fail at any second. But as a woman? It's hard to watch gravity succeed at every level.
The irony about aging is that it's new. Most of life is spent as children, teens, young adults, vital people in the midst of work and family --the Matron has been in the thick of these things for nearly 48 years.
But at some point, if luck shines, we're older than most around us. And even though this journey is just as uncharted and fresh as all those other beginnings, there's an unspoken expectation that age carries with it some sort of wisdom. Yet the Matron will pit facing 50 with anyone looking at college: it's all new territory.
Still seeking that wisdom. And grateful to see the next birthday, gravity aside.
Posted by Minnesota Matron at 2:47 PM 11 comments: