Matron: "Everything includes neighbors, cousins, grandparents, friends and teachers. Everything is actually EVERYTHING."
Stryker: "Uh oh."
Matron (prepared to take the hit): "Spill it. What's the potential tally on your list?"

Stryker: "$487.63, plus shipping."
Matron: "Where did the magic of Santa go?!"
Stryker: "We're Buddhists, Mom. This holiday has always been pragmatism, commerce and negotiation."

Matron: "Please don't pick this very moment to tell me why you joined the debate team."

Stryker: "Because I plan to hone those skills in this very kitchen?"
Matron: "Okay, fellow Buddhists. Let's work on honing our loving kindness practice and worry about what we're going to get for the holiday we don't celebrate anyway, later."
Stryker: "I am a capitalist. The loving kindness thing will cost you."
And if she had an extra $487.63 laying around, she just might have written that check--while banging her head against the counter.
Posted by Minnesota Matron at 10:41 AM 7 comments:

Cause for Concern Number One

Given the Matron's hysteria over Merrick's complete and utter lack of interest in all things Letter and Word, she dropped a few hysterical hints to Grandma Mary about Headsprout, a nifty online learn-to-read-tool. Of course, Grandma Mary -- being all things educational herself as a teacher for lo those many years -- immediately purchased said online program for Merrick, despite the fact that small villages in Africa could be sustained for the cost of Merrick's six-month edification.

Now, the Matron didn't give it much thought when Grandma Mary signed up Merrick using her own email and password as sign-in for the reluctant student.

It took Merrick about ten seconds to smell the whiff of parental (okay make that maternal) desperation emitting from the internet.
Matron: "Merrick, don't you want to play that new fun game with the aliens?"

Merrick: "THE ONE THAT YOU'WE TWICKING ME INTO WEADING WITH!"
Matron: "You can play while you eat Halloween candy and both dogs can sit in your lap!"

Merrick: "What do you mean, PLAY? THIS IS WEADING."

And so on. . . . that child definitely has to board the bribing bandwagon!

This isn't even the cause for concern. Oh no. Turns out that Grandma Mary, who paid the handsome fee, is getting these regular updates from Headsrout.

"Dear Mary: We see that it's been six days since Merrick last logged in! We hope he comes back to prance with Alien Bob soon."

"Dear Mary: We hope that Merrick finished level one in the 10 minutes he was logged in. The more time your child spends . . ."

You get the picture.
The best part? Grandma Mary emails each of these updates to the Matron, with no comment. Just the emails indicating that her dollar? Not well spent.

Matron: "Merrick OMIGOD. YOu can't watch TV until you do Headsprout. Grandma Mary is watching!"
Merrick: "Now she knows that I don't like weading even on the 'puter."

Cause for Concern Number Two

The Matron took a good long look at Scarlett's schedule and realized that between this child's current and upcoming shows -- Fezziwig's Feast, Sister Kenny's Children and the Miracle Worker reprised, here -- she just has NINE days without a show or rehearsal until April!

Scarlett: "MOM! What am I going to DO on April 1st!? Have you found any auditions for me! I am INCREDIBLY worried about April 1st! Are you checking the playlist HOURLY?! I don't want to miss my chance! Can you find any auditions for Broadway too -- I bet it is HUMANLY POSSIBLE to get onto Broadway at 11!"
Stage mothers. So pushy!
Cause for Concern Number Three

In case you didn't know, people actually eat these. People with tongues and taste buds.
Posted by Minnesota Matron at 9:34 AM 16 comments:

Here, a stunning poem that contains a little bit of joy and her dark side. Join the Matron in practicing radical kindness today, with our collective vulnerability in mind.

How many nights
have I lain in terror,
O Creator Spirit, maker of night and day,

only to walk out
the next morning over the frozen world,
hearing under the creaking snow
faint, peaceful breaths...
snake,
bear, earthworm, ant...

and above me
a wild crow crying 'yaw, yaw, yaw'
from a branch nothing cried from ever in my life.

Here, contemplation and kindness. Below, joy.
Posted by Minnesota Matron at 8:20 AM 3 comments: 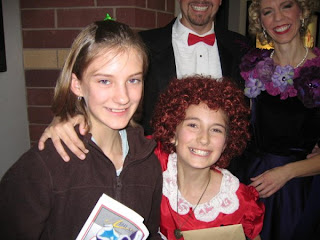 This is what joy looks like, friends, pure and unfiltered.
Posted by Minnesota Matron at 8:18 AM 4 comments:

Day of the Dog

Over the weekend, the Universe handed the Matron yet another lesson: Halloween is really Day of the Dog.
What's not to like, from the canine perspective? There's that doorbell, ringing and ringing and ringing and all those people to bark at!
Even better: there is candy.
If you have 6 and 13 year old boys, they will leave their bags of candy laying around on couches, chairs, and the floor without a second thought. They will pick up a Snickers bar, take a bite and put the bar down, distracted, and walk away. The boys will dump out half a bag of candy to examine the booty and then realize that Malcolm in the Middle is playing on the TV upstairs. They will go up, leaving the candy behind. The 11 year old girl will keep her candy hidden in a secret locale, safely far away both brothers and the dog, and she will also be very aware of the fact that other people's candy is being left out, carelessly, but hers is not.
Because she is female.
Herein lies the secret to the cultural mythology about a boy and his dog. Dogs like boys because boys aren't girls. Boys leave candy on the floor. Girls don't. If you are a dog, this is enough for you.
Now the Matron has a P H D in English Literature and Feminist Studies. She knows she is breaking every rule in the book here. She doesn't care. Hear it again: boys leave candy laying around and girls do not and this is why dogs love boys. There! Essentialism 101!
The weary Matron feels that she has earned the right to stereotype and malign small children. Because if you clean up 100 million tons of dog vomit in one day, why, you have lost a wee bit of your brain in the process.
That's right. Satan's Familiar ate the Halloween candy-- at least one pillowcase FULL of sour and chocolate delight.
Unfortunately he's currently recovering on the bed that Scarlett made for him, complete with pillow, blanket and handy bedside water bowl. Note: the GIRL made the bed. Was in charge of convalescence. Was NOT the cause of problem in the first place.
And tomorrow, that damn dog will return to his position by Merrick's side, waiting for that hot dog to drop.
Posted by Minnesota Matron at 6:42 AM 11 comments: