Yesterday, the Matron went to the dentist -- and much to everyone's surprise, had an emergency toothectomy (yes she totally made up that word).  One of those molars was practically fermenting!    The ordeal was just that -- an ordeal, but thankfully at the hands of a kind and competent (and funny) dentist.

While tripping on all kinds of pain medication with her mouth wide open, the Matron flashed back to the past -- to an episode that she had truly entirely forgotten.

Freud has a different name for this.

See these children?  This is Stryker on his first day of second grade, successfully marring Scarlett's kindergarten debut.  Note how the daughter desired her hair all pulled up pretty, tidy little navy school uniform for a public school that doesn't require uniforms.   But that look in her eyes?  That is anger.   See that grin on her brother's face?  Joy.   Joy radiating from the suction cup stain on the middle of his forehead.

He thought it would be fun to tell his new teacher that his parents hit him.  He also thought it entertaining if all  the pictures from this day forward, marking his sister's educational DEBUT were notable largely for his own disfigurement. 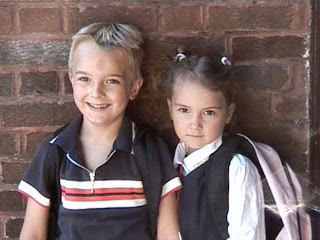 Setting the stage for a child with PERSONALITY and WILL.  Which brings us back to the dentist and an event for which the Matron has no documentation other than her own previously repressed memories.

Stryker was maybe three and a half when he went for his first official visit to the dentist.  He had a swollen gum, a painful little tooth.  Unfortunately, this child could smell deception.

He knew the dentist was going to kill him.

At least that's what the Matron must tell herself to justify what happened when they stepped into the office door.  Friends -- that formerly adorable, precocious, chatty, obedient child CLUNG to the chair in the waiting room.  He flailed and screamed, pulled at furniture and drapes, lunged at desks, and howled as his mother, dental assistant AND DENTIST HIMSELF as the three adults pleaded with that child to step on into the next room.   The Matron took a few swats at him, trying to reel him in.  He was a good dodger.

The dentist, assistant and the Matron circled around Stryker for hard-core hostage negotiations.  The dentist promised Stryker could turn on the drill.  Why, even drill a tiny bit into his very own hand!   Candy was produced by the Matron and nobody objected.  The assistant showed Stryker pictures of her own children in that chair.  She basically dissembled the examining room, bringing in item by item for Stryker to inspect.

"See, honey?  That's all this little mirror is!"

He remained wrapped around a chair leg, screaming and kicking at anyone who came near him.  He actually snarled.

The waiting room cleared out.  The Matron isn't sure if those other patrons were just hanging around to watch the show, post-appointment, or if the torture was getting to them too.

After ONE HOUR of pleading and promising, and threatening?   Beaten --and quite possibly committed to winning the battle -- they resorted to physical force.  Remember, Stryker had an actual bona fide physical problem!   The Matron now feared an infection was spreading to his brain.

The dentist and the Matron dragged a screaming, biting, kicking, sweating, sobbing Stryker into the exam room.

Child secured!  In chair, held down by his mother!

But the prisoner escapes!!   With one epic whirl of chaos and destruction, he pushes his mother aside, sweeps instruments off the tray, kicks the dentist, hits the chair and runs screaming and sobbing down the hallway, white bib bobbing from his side until he hit the bathroom and (so smart!) dashed in and locked hte door with three adults hot on his three year-old tail.

Here is the Matron, standing outside the locked door with the dentist and dental assistant.  They are sweating.  The Matron stopped trying not to cry and is now sniffling loudly.

The dentist looked off into the distance, suddenly seeing a vision - far off and dreamy, a world the Matron could not see.  Things looked good there.  He smiled and pulled off his gloves:  "Actually, Mary, I've been a dentist for 35 years."

She waited, expectantly.  This was going to get her son out of the bathroom?

Dentist:  "And in all of those 35 years, I've seen a lot.  Some pretty bad stuff -- and good, of course -- but some really ugly moments.  You know what?  This is the worst.   Your son is the worst patient I have ever encountered.  It's almost unthinkable, how bad he is--as a patient, I mean, not a human being.  This is a little like a circle of Hell, you know?  That's what this is, this child and appointment.  Hell."

Friends -- here's where you think the Matron might be insulted? Shocked?  Surprised at the breach of professional decorum?

But here was a man 10 days away from retiring in a private practice he owned.  A wise man, rich with experience.  He was telling it like it was.

Circle of Hell.  Even the Matron couldn't have said it better.

And he smiled, put down his gloves and walked out the door.
Posted by Minnesota Matron at 9:20 PM 10 comments: