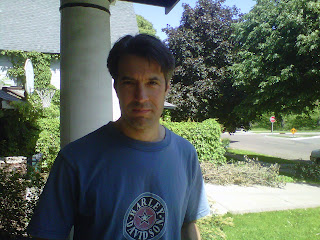 He is 50 years old.  Actually, he is 50 years and three days old in this photo.   Friends, this is actually a bad picture of the Matron's husband.  He has an adorable, sexy semi-smirk that's absent here; also absent is the typical careful attention to hair.   Still.

When the Matron was a Youngish Miss, she and her then-fiance did what most people do when encountering a red light while driving.  They stopped at it.   While stopped, the three young women in the car next to the driver's side honked lightly and . . . . one held up a sign with a phone number.  She looked at John, tapped the sign and pointed to herself enthusiastically.

This is where the Matron (then a Youngish Miss) for the one and only time in her entire life actually really truly had this thought:  "What am I, chopped liver?"

Sometimes, the Matron jokes that John is prettier than she is.  Often this quip is made in her husband's presence.  He has never disagreed.

Look closely at this photo.  See those eyes?   See the firm skin beneath, free of the dreaded eye bags?  This is the last time that face will look so well-rested for the next four days.    The photo marks John's departure on his four day fiftieth birthday road trip.  He had no real plan -- just a tent, a car, a cooler and an open mind.

All the Matron knew was that he was going to do what newly minted fifty year old men do on the open road.

Well, except for what his wife wouldn't want him to do.  Otherwise . . . all that other middle-aged man stuff.

Text from John's first night of trip:  "Camping.  Raccoons in tent all night.   Didn't sleep.  Moved all food.  They know how to unzip stuff."

Text:  "Raccoons can get in zipped tents and open cans."

Text:  "Open mic at bar in rural wisconsin.  Near toothless man asking me if I know where babes are.  Professional drinkers only."

Text:  "Will there be clean sheets when I come home?"

When that man returned, he did not walk into the house.  Stumbled.  Between the raccoons (he camped with them for two days) and open mic nightmares, he had barely slept in four days.

Matron:  "But did you get what you want out of it?  I mean, the reflection, the time, the sense of a life on the road?"

John, confused:  "Mary.  I slept with raccoons rummaging through my clothes and destroying my tent the first night, up all night with a gun the second.  The tent I put up, took down, put up and took down.  Drove about 30 hours total.  High life was a metallic shed with the sign "bar" slapped on it that appeared to serve only chronic alcoholics in a town of 900.  Raccoons are evil.  If the devil exists, these are his henchmen."

Matron:  "Sounds like PUH-LENTY of material for reflection, sweetie."

Matron, all eager!!    She could not wait to hear the epiphanies:  life, aging, family, career, love and spirit.  What is it like to actually face fifty -- the inevitable decline and recapping of a life?   What could her beloved share -- or what burden might he bear, ahead of her own impending birthday?

John:  "Remember those girls, the ones who flashed the phone number at me at that red light?  Way back before children?"

John:  "Do you ever wonder what they're doing now?"

Then the Matron understood.  Her husband was doing exactly what fifty year old men do--maybe even especially the pretty ones.   But the Matron didn't say this.

Instead she said:  "Then you're not going to be happy about the new pet raccoon?"

(there were clean sheets and no raccoon--sorry, Merrick)