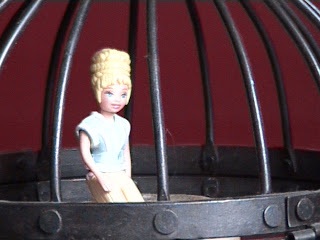 a middle-aged witch, me --
tangled on my two great arms,
my face in a book
and my mouth wide,
ready to tell you a story or two
(Anne Sexton, Transformations)


One must be just the right mood to fully appreciate Anne Sexton and her permanent perch in the gallows.    It is the kind of mood best accompanied by a photo of a caged plastic doll and a bottle glass of cheap red wine.

And maybe a cheesecake.

The Matron finds herself just so.

From time to time, she is visited with a peculiar --quite specific -- malaise.  For the past few days, said state hinted and lisped, ebbed and surged, only to settle in today.

Nothing fits quite right:  her jeans are too, well, jean-like.   Yesterday's pert hair now hangs limp.  No book holds her attention and the play she is supposed to be penning for a local theater torments her from its unopened Microsoft Word file.    She yawns and rolls her eyes at students' online questions.  Stupid!

She knew it was going to be bad on Saturday while preparing for a lovely dinner party that she her fine self was hosting.   Whenever a guest texted or called to query "what should I bring" or "remind me of the time?" her immediate internal reaction was:  F- you.

These are people she likes.   Invited to her house, even.

There are too many dogs in the house.   In addition to her own two, she is currently dog-sitting her mother-in-law's. 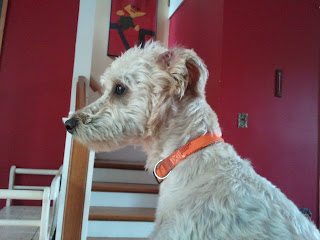 He is 8 months old and a terror.

Everywhere the Matron turns, there is yip, yip, yip.  The borrowed dog eats garbage.   His favorite toy is toilet paper, garnered mid-swipe (yes). The other two dogs have wood ticks.   Scarlett wants to go to Target, the library, Punch Pizza, and then a friend's house culminating in a 12:00 am pick-up.   Merrick is bored, a fact which requires much repetition and renewal "I'm bored.   Mom!  What can I DO?"    HWCBN says nothing from the sanctuary of his room until he emerges with complex requirements for cross-country college visits and immediate, equally-complex adult-level application issues for various scholarships and adult endeavors.  That must be done now.

Before anyone calls an emergency number, the Matron understands --and is grateful for -- the transitory nature of her intolerance toward . . . well, life.     This happens now and again, perhaps once, twice a year and inhabits her for a day, maybe three.  She is willing -- determined, even -- to call this malaise existential.

For no tidy reason or narrative, this is where the Matron sometimes resides.   Where she is now and, a psychological space from which she will -- according to life's transient and temporary rules -- also depart.

Oddly, perhaps, yours truly is grateful for --and even oddly appreciates -- these underbelly moments.    She is glad to be a full spectrum participant, from Anne Sexton and Sylvia Plath to . .. well, Garrison Keillor and Billy Collins.    Fog lifts and generally, there is sun.

After all, she named her one and only daughter Scarlett:  "Tara.  Home.  I'll go home and I'll think of some way to get him back.  After all, tomorrow is another day."