For People Who Complain that She Complains

Every once in awhile, the Matron gets a comment or private email noting that the Matron is
A) Celebratory about her own skills
B) Celebratory about her children's successes
or
C) Crabby
May she just announce that tonight's post is C? And note, in a non-crabby sort of stance, that these laments from readers are few and far between. The blog is mostly love and support: thank you!!
But, as recent posts have indicated, this has been an unusual week. First, there was the blizzard. A BIG blizzard that felled the local sports stadium. The blizzard meant the Matron and her husband hosted Scarlett's stranded theater cast for a large portion of Saturday and devoted themselves to a weekend of snow removal and neighbor care.
Then there was conveniently no school for two days, due to the weather. Tuesday, the second day without school, the Matron both offered and agreed to requests to take in seven other children.
Other parent: "Our two just got over the flu and my husband is at home with it. I'm desperate but you're gambling."

Matron: "We'll be fine!"
Not.
Merrick has spent the past 10 hours throwing up. He's languishing in bed with a fever of 101. The Matron has done nothing today but tend to the ailing and had to cancel all meetings. This has not meshed well with end of the semester grading and other obligations, like pretending Santa exists and he brings stuff. Which adults have to purchase. Ahead of time. And then Santa grades 300 student assignments.
So the Twelve Days of Christmas in a whole new order : one major blizzard, 50 people in the house, seven hours of shoveling, two days without school for children, 300 assignments to grade, one puking child, one teen preparing for three days at a debate tournament, one pre-teen with seven hours of driving requirements (guess who), one now 70 lb puppy who ate all the leftovers, three enormous work projects that nobody else is helping with, two birthday presents overdue, seven thank you notes also overdue, ten holiday parties looming (but that's good) and a partridge in a pear tree.
Go ahead and send her that email. She's just going to clarify that the category is C. She knows you've all been there.
Posted by Minnesota Matron at 7:11 PM 15 comments:

Ode to a Dog 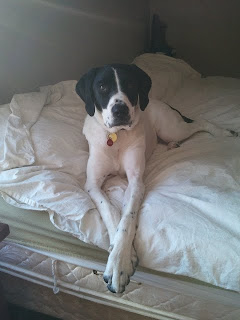 Dear Boc,
Did you know that your name is an acronym? The children have dubbed you Big Old Canine, or Boc, for short.
The Matron far preferred Shakespeare, Caspian, Othello or even, Bach as names. But . . . well, she gives in to children that way. Only no ice cream if you don't eat dinner. That's firm.
Today, you destroyed 6 balls, two couch cushions, one plate of ravioli, one leash (ate through it), and a yam. Why do you like yams? Please clue in the children about the vitamin power of this root vegetable.
At just barely a year old, you weigh 70 pounds. Merrick taught you to 'ride' his back; little does Merrick know this is an invitation for, well, mounting. The Matron discouraged this joint activity.
Merrick: "Mama! Look! Boc likes to wide my back!"
Of course he does. He's a male.
The Matron only has 30 pounds on you, which is why you and four of your newfound friends at the dog park knocked her over today -- twice. Yes. Massive dogs ran at her as an ideal, tiny target. Boom. Down she went.
For friends who live in California or other balmy climates (California is an easy target and international ideal) , being knocked over might not seem like an event. But 'down' in a dog park in Minnesota means falling into five feet of snow and 4 degrees. It is entirely unpleasant. Plus, dogs trample you.
Boc, Satan's Familiar recently removed himself from his safe haven under the kitchen table. The Matron is impressed. It took a huge blood hound to domesticate He With the Cloven Hoof. Good work! She's sure there's still poop in the basement but imagines that now you're eating it. Thank you.
But tonight when adults and dogs collapse into bed and she remembers that you were slated to be 'put to sleep' the day before being rescued -- three or four families in as many months, she's foggy on details, just the impending death -- she's happy you're part of the family.
Even if you do eat everything in sight and knock over small children.
Sucker. And that would be the Matron.
Posted by Minnesota Matron at 9:42 PM 4 comments:

Oh, the realities of life. And death
Here is the Matron with 11 children in her house. School was cancelled on Monday and Tuesday due to the weekend blizzard. Guess who opened the doors to the minions? She is a little stir crazy and wildly happy that school is back on for all tomorrow.
Scarlett: "Maybe there won't be school again tomorrow!!!"

Matron (snappish): "It doesn't matter. I'm dropping you at the door at 8 am and returning at 3:30. I don't care what happens in the interim. There's a coffee shop across the alley if the building is closed."
Scarlett: "Mom! You're scaring me!"
Uh, yes. Everybody's scared--including your mother. Four snowbound days are three days too many.
In the midst of the mayhem -- which includes the sixty-five pound bloodhound puppy's newfound ability to stand on the five feet of snow and simply graze on over the fence to run wild for blocks, the fray of children, the need of neighbors for shoveling and food, and the Christmas tree that keeps falling over -- Merrick came to the Matron with this. And really -- there was mayhem. Dog lost, almost a dozen children to feed, nearly 300 assignments to grade (so not done).
Merrick: "Mama? Will I die? If I die, will I nevew have my thoughts again? I'm wowwied about my thoughts. And my bwain."

Friends, the Matron - I -- wanted to sit down and weep. There was terror on his face. He had three friends in the house and a lot of action, and this was on his mind.
Matron: "Merrick, everything dies. Plants die, people die, bugs die, grass dies, flowers die. Everything alive dies."
And she's really sorry.
Merrick: "But what happens to my thoughts when I die? Will they go with me? I can't think of not being with my bwain."
And the Matron pulled this seven-year old onto the couch beside her, next to a blazing fire and house full of children and great good human energy, and had a long, loving --and optimistic -- talk about the unknown. She spoke of reborn spirits (remember, she's a Buddhist so hopefully she'll return as the first female president), but she didn't lie or revert to religious views which are foreign to this child.
Merrick: "Dying is pwetty scawy. Can I love up evewybody wight now to make up for the west of the univewse?"
Darling, darling child. She never wants to part from you. Please, love us up. And thank you, Merrick, for making tomorrow a different sort of day. She plans to consider eternity every day for the rest of her life.
Posted by Minnesota Matron at 9:20 PM 9 comments:

A Weekend for the Books

Minnesota is in the national news!
May she just utter one word: weather? Let it snow and then snow. And then snow. And then get super super cold and windy.
Early Saturday, the young and inexperienced running Scarlett's current show sent an email message saying "the show must go on." People. Even the Guthrie and Ordway cancelled. So actors living an hour away in good weather risked life and limb --and some spent four hours -- to get to the theater; luckily, the matinee was the one performance slated for Scarlett's understudy, so the Matron didn't need to drive until the evening performance, which she deeply hoped would be cancelled.
But all those actors arrived at the theater to find the matinee cancelled and the evening performance uncertain. They were instructed to stick around and be on call.
Guess who invited everyone over to her house?
Living just half a mile away, the Matron offered to host and feed the cast and crew while they waited to hear if the evening performance would run. With 15 minutes notice, she had children vacuuming and shoveling junk into draws (ahem, sorry to say even a couple of neighbor children were put to work) while she turned to figuring out how to feed a houseful of strangers (not to Scarlett, but to her).
After five teeming, social hours --and a really good meal (she's amazing that way--good bread, soup, salad and roasted turkey go a long way), the Matron tossed up her hands. No grading, no work, no regular life. Instead, she tossed a 'blizzard party' for the neighbors, bringing in another swath of folk. Only these people drank wine and stayed until midnight. The theater people mostly departed after the evening show was sunk.
This morning, there is not a tendon, bone or muscle in the Matronly body that does not ache. Readers who live in Minnesota know that shoveling is the culprit. Because the Matron and her husband take care of two other houses (the elderly and absent), they were faced with a long day of work yesterday. Yours truly was out for four hours; John put in about seven and HWCBN, five. Even the Diva picked up a shovel.
Merrick limited himself to two gigantic snow forts and frolicking.
Merrick: "This is the best day EVEW!"
Today, school has been cancelled for the children. The temperature is below zero with a wind chill that dips well into the double digits. The neighbor's cat is missing and driving remains an adventure.
No newspaper delivery in three days!
But yesterday, when the elderly neighbors needed much help (they physically cannot shovel and live at the mercy and love of others), the Matron was heartened to see HWCBN dress quickly with a sense of urgency and duty. For most of the day, he was shoulder to shoulder with his father, digging out driveways, pushing stuck cars, and clearing sidewalks.
The Matron threw in the shovel after her own four hours and focused on food and hot cocoa.
But she watched her 14 year old son labor and serve. He checked on neighbors, brought over food to some, shoveled people's sidewalks, dug out cars, and looked for a lost cat. He never complained about the zero degree weather or the truly hard work involved. As needed, he and his father came in for sustenance and a few minutes warmth. But mostly? They worked --outside in frigid weather and for other people. The Matron kept thinking of Little House on the Prairie.
Okay, but she also wondered why some on her block with no children, no jobs to go to and no driveways didn't extend themselves. But that's another story. And not the example she's setting for her children -- or the way she wants to live her own life, either.
And when the Matron made dinner for her exhausted family late last night, when the sidewalks were mostly passable and all the neighbors safe and dug out?
She didn't put that plate of steaming spaghetti in front of a 'teenager,' but instead made dinner for the two men who now sit at the table.
Posted by Minnesota Matron at 6:42 AM 15 comments: