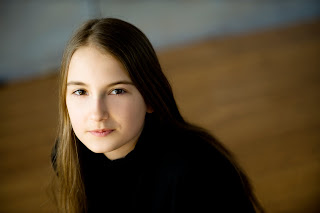 Stage Mother has been absent for some time. She promises a full return within the week, with an update on Young Diva's summer exploits, upcoming shows and the big national commercial (in which she proves herself Effective in the delicate arena of squeals and giggles -- what talent).
Scarlett's upcoming show is Mean at Youth Performance Company. Now, the Matron has blogged about this show and that company before. You see, yours truly has a big old soft spot for Youth Performance Company -- YPC -- because not only is this a place for art, it's a creative autonomous, and safe space for teens.
Imagine. You're a parent. Your newly minted teenager is on the cusp of major life changes -- decisions that might have life-long consequences. New responsibilities. Challenging situations. Adult-in-training-time. And this newly minted teenager falls in with a certain kind of group.
The wrong side of the tracks? The fast crowd?
Cut to black and white film clip, 1950s. The Matron looks stylish in a June Cleaver sort of way (only without the cone-like breasts because hers are of the marshmallow-acorn variety). John has a crisp white shirt and sweater. Maybe a pipe.
Matron to John: "Honey, I'm worried about Scarlett."

John, clutching Matronly arm: "Me too! All that . . . " he breaks off, unable to continue.
Matron (frightened whisper): "Singing, dancing, and joy. I know! I know! What are we going to DO?"
The threat? A gang of theater-driven, community-minded, high-spirited and loving young people who spend their free time SINGING and DANCING, WRITING ORIGINAL PLAYS and PLANNING GOOD DEEDS.
The problems she has with this child! Co-mingling in song. Sigh.
Scarlett has just announced that Mean, which opens YPC's 23rd season on Saturday October 8 (go see it!) is Scarlett's 18th show in five years. Somebody has been counting.
Matron: "You owe your father and I $17,390 in travel expenses."
True.
But the real point of this post is in the title. YPC is asking young people (12-18) to send in 30-60 second videos documenting their own experiences with bullying -- being a bystander, bearing witness, bullying or being bullied, they want 'em all. The best few will be incorporated into the play. Everybody gets his/her name in the hat to win that $200 Best Buy Gift Certificate.

Here's the link. And the info. God-Buddha-Oprah-Universe-Allah bless the internet. And that darn crowd Scarlett has fallen into . . .

Are you between the ages of 12-18? Have you been bullied? Been a bully? Been a bystander?

YPC would like you to create a 30-60 second video that shares your personal experience with bullying. The best videos will be screened at performances of Mean, October 5-23, 2011.

Videos can be emailed to info@youthperformanceco.org (subject line - Mean Video) or uploaded to our facebook page.

Everyone who uploads a video will receive a free ticket to Mean. Also, your name will be placed in a drawing to win a $200 Best Buy gift card. (Drawing will take place on October 23rd prior to the 2pm show)

Videos & entry forms must be submitted by October 21, 2011 to be included in the drawing. Entries received after October 1st may not be screened at Mean due to time.

Posted by Minnesota Matron at 7:09 PM No comments:

Do not read this post if you dislike cliches, especially if you find yourself becoming one.
Do not read this post if you are in a light-hearted, fare-thee-well mood.
Do not read this post if today's blog reading time allotment is 30 seconds per post.
There. Forewarned.
As many regular readers may have noticed, the Matronly output has taken a dramatic down spurt over the past few months. On the one hand, those quirky family stories only go so far and now that the older children have gone all Private on their mother, she is left only with Merrick for the main family fodder. Frankly, he is not that interesting. Cute, yes. Enough to fill a blog? No.
But there's a larger problem. She has trouble dredging up interest in her very own fine life. Indeed, a thin veil of discontent has shrouded yours truly for the pats few months and she finally put her finger on it.
This vague, gnawing discontent immediately spawned a few wonderful changes in day-to-day life. Feeling something dark licking at her heels, the Matron curbed a few bad habits and instilled some new ones. She stopped drinking, as the nightly wine was more a necessity than a treat. Her eating habits took a dramatic turn for the better; no more Snickers bars for lunch. She began exercising daily again after a year in which the workout had become the exception rather than the rule. The meditation pillow came out! She blew off the dust and sat her increasingly fit butt right on it, more than once. When she thought about loving-kindness, she actually practiced it, and her household grew more peaceful. So transformed, her skin cleared up and the skinny jeans from high school slipped over her hips once again.
Lots to be happy about: better health, better body, happier family, shiny skin.
Right?
Wrong.
In just two months, the Matron will pen in the number '49' on any pesky form asking her age. Here's cliche number one: she's well aware that she's fallen into the classic well of worry about marking middle age. Her strategy was to take herself in hand. Thank God-Buddha-Oprah-Allah that she doesn't have bunch of cash or she may have purchased a red Corvette.
She can still pull off braids and ponytails and doesn't have any gray hair. Tenure? Nailed! The children are happy and by any measure, successful. There's not much money, but she can still afford to splurge at the thrift store and keep the dogs living the lifestyle to which they are accustomed.
But this, friends, is not enough.
A few weeks ago, HWCBN was bemoaning the plight of American life. Indeed, he could have been a co-writer for American Beauty, when he bitterly observed that his own shining future might very well simply hold a job, bills, mortgage and diapers -and not much else, unless he made something happen.
HWCBN: "That's it? That's what we get out of life? Get up and go to work everyday, pay bills, maybe go to church to pray for something better after you die and then do it all again next week?"
Of course, during her son's existential moment, the Matron said all the right words. No, she exclaimed, there is much more to life! You can make the world a better place for your presence in it, create art, invent new technologies, start political movements -- follow the dream, my darling. Don't settle.
You know where this is going.
Cliche Number Two: the Matron has not been following her own advice. And despite the bounce in her newly toned-up step and astounding job security, she is not happy.
She finally put her finger on it -- not happy. Life is often too mundane to blog about. Not that Scarlett isn't exciting: indeed, you may soon see her face plastered all over national TV (more on that later and it's just a commercial) and HWCBN is quite literally a blur as he launches into adulthood.

Merrick can read.
Exciting.
But that's not her life. That's theirs. She understands the difference and cliche, cliche, cliche, wants to head into the late half of her life knowing that she hasn't squandered this great gift. She wishes children were sufficient fuel for the fire in that belly, but they're not -- at least not in hers.
Cliche, cliche, but . . . it's time for a change. A return, perhaps. For the Matron was happiest when engaged, full-throttle, with a cause larger than herself. From running political campaigns to environmental organizations to writing novels, she's been at her best while producing something more enduring than a paycheck or offspring.
She's not sure what that change will mean. There's a book project winking at her from a shelf, something she never has 'time' for. She's always been meaning to apply for that Fulbright. She's been invited to write a play for a local theater company and well, just never gets around to it. Why can't she start her own non-profit and find a way to more directly do good in the world? Certainly, this change isn't an overnight decision, but a process.
The one thing she knows is that she'll take her family with her. Don't worry John. She's not slinking off with someone younger. At least she has sense enough to know that cliche is not very becoming.
Long, long ago, her younger self read a review of a slim book of poetry in the New York Times. The reviewer marveled at the raw rare beauty of the poems, mourned the fact that the writer only produced this one tiny volume before dying, too young, in her late thirties. What a loss, he proclaimed! If only this writer had given us more before her time ran out! The world would be better, he concluded, for the grace of her work in the world.
His advice to the rest of us?

"Know when it's time to skip the party, and write the poems."
Indeed.
Posted by Minnesota Matron at 10:20 AM 5 comments: