Read All About It


Today, the Matron had the good fortune to encounter a friend she hadn't seen in a while.  Like most of her unexpected encounters, this one happened in the grocery store -- right by broccoli.  Sometimes the veggies vary but the goodwill?  Never.

Matron:   "Anything new and exciting happening in your life?"

Friend:  "Your blog is completely disappointing, as of late.  Absolutely no idea what's going on in your life.  Like hard facts.  Details.  You know -- that blog thing?"

Friend:  "Readers need an update.  Like a news flash . . . or I might have to start calling you to find out what's happening."

This gave the Matron pause.  Call her?  As in, on the telephone?  Concern started its slow creep across her nearly unlined (ha)  forehead..  What if people -- people she would recognize on the street --- started calling to ask her 'what's up?'

Genuine human interaction makes the Matron nervous.  She swears she's a premature birth.  Her spirit was supposed to arrive around 2072 when telepathy replaces talking.

To that end, the Matron is keeping her neighbors at bay with   . . . . an update of actual bona fide nearly-verifiable and almost reliable facts!

1.  Merrick recently discovered the highly disturbing and unanticipated fact that he is attending Summer Academy, which is exactly what it sounds like:  summer school.  Except it's at a ritzy private school and the parents are forking out big bucks for four weeks of work that they hope will rectify this type of nonlinear computing: 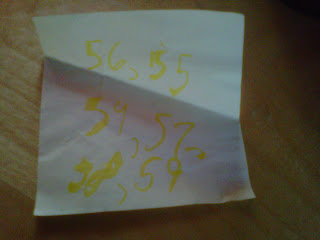 That, friends, is Merrick's approach to 'listing' numbers 54 through 59.   This topsy turvy approach defines all of his academic endeavors.   The Matron wants a littleless topsy and a little more trim and tuck.

Merrick is also hobbling about on crutches after being sent to school for three days with a 'buck up boy' from his mother.  You know you're guilty of that one?  Please say it's so!  Yours truly took her first good hard look at the leg after Merrick wondered:  "is it okay to crawl at school, Mom?"   Imagine her shock at seeing the swollen, red, bruised log where his lovely ankle bone used to be.  Live and learn.  Next time she'll get Scarlett right on that.

2.  He Who Cannot Be Named (HWCBN) and the Matron recently had at it over the appropriate use and definition of the word 'hegemony.'   Dictionaries were consulted, politics called out.  Tempers flared.    All the while, the Matron's entire interior universe was singing 'my 16 year old son and I are arguing about HEGEMONY.'   Who needs drugs when you can engage in parental combat over ideas?!  And even understand them.   Actually, HWCBN turns 16 in a few short weeks, when he will join the other infants trying to kill her from behind their steering wheels.  Perhaps this is really Darwinism at its best.  On other eldest fronts, the young man is fifth in his graduating class academically; the top three are tied, which in his mother's eyes makes him third.  She should really get on with updating the principal about this mathematical error.  This honor -- second year in a row -- means various school festivities and awards, certificates and all such things occupying the Matronly time.   Beats juvenile detention, though.   Finally, the son is headed to Kentucky then Chicago this summer, where he will spend seven glorious weeks hundreds of miles away from his parents for seven weeks at a two-state debate institute.

Here is the schedule that the Matron encountered when she signed the permission forms (and wrote the check):

Again, hear the universe sing:  an offspring of hers is choosing to spend six hours a day in the library all summer.   He also was awarded a national merit-based scholarship AND plays baseball and has his own small computer business.

Pause for a moment and consider:  "this woman is just bragging about her child."

Why yes she is!   This is her job as his mother.

3.  These are not Scarlett's vocal cords but they do the trick.

Those little bumps, right above the v at the bottom?  Nodules.  Scarlett has been in a play, movie or commercial continuously since she was just 8 years old.  In retrospect, the Matron can trace the moment the vocal cord problems began, during a particularly spectacularly busy run as first Ramona Quimby and then Annie.   Wonderful roles, all, but nobody told this stage mother that the voice needed a rest.  The Matron is a big believer in rest, but her parenting book defined that as copious days off from school, nothing more.

Under strict doctor's orders -- really, a world-class voice specialist, thank goodness -- Scarlett has been cut from the stage until September.   In the interim, she is allowed to speak only in her new healing 'airy' voice, visits the physician for rehabilitation and generally tries to keep talking to a minimum.

And the daughter?  Much to the Matron's oceanic relief, she is happy.  Happy because now she knows that the problem isn't her singing voice stripped away, but a wound that needs to heal.  She is already plotting her glorious return to the stage when she starts HIGH SCHOOL (sob, sob, sob!!) at the St. Paul Conservatory for Performing Artists in September.

That's right - it's like all Glee all the time.  Fame.  Rent without drugs (mostly -- but that's another blog post).

The Matron sees these teenagers roaming around downtown St. Paul, where their campus is.  Classes require dance studios, orchestra pits and stages so the students roam from artistic venue to artistic venue for 'class.'  They lunch at coffee shops and hang out in the park.

Guess who cannot wait for this much freedom.

4.  The Matron herself?   Continuing her reign as Online Teaching Goddess, she is teaching literature and Gender Studies at her computer over the summer.   By fall, her very own individual professional "Writer" web site should be up and running, thanks to some astounding generosity of spirit on the part of another overly busy mama.    Mostly, though, she continues to use the word 'contemplative' to describe her life situation.  Her friend and neighbor is still on the long pull toward death.  Every morning, the Matron wakes up and her second or third thought is:  "what nice thing can I do for xx today?"  And she does it.   But the life that is fading is one of the brightest, most beautiful the Matron has ever encountered.  An artist's life -- the kind of woman who would see the perfect photo -- a hawk devouring the captured squirrel, the monk on a street corner, a child caught just so -- and abandon her schedule to fulfill the purpose of a single photo.  She was-- is -- that exact same way about people, too.  What the Matron loves most about dear friend is that she immediately skipped over small talk to the heart of the matter --and was always led by her own.   In the face of suffering and injustice, the Matron has taken to a serious meditation practice.  It helps.

5.  John turns 50 tomorrow, Saturday May 19th.    Mostly he wants someone to compliment him on his unparalleled talents with a vacuum, and his youthful hot appearance.  The Matron will assert that the latter is, without question, true.

In this Sort of Mood

The Five-Day Rainby Denise LevertovThe washing hanging from the lemon treein the rainand the grass long and coarse.Sequence broken, tensionof sunlight broken.So light a rainfine shredspending above the rigid leaves.Wear scarlet! Tear the green lemons off the tree! I don't wantto forget who I am, what has burned in meand hang limp and clean, an empty dress ---The Matron so loves the images, the suspension, the lust for lemons so urgent that one must reach while they are still green, not ready. No waiting! Here's the day we've been given. Blaze and shine.
Posted by Minnesota Matron at 7:25 AM 2 comments: