Today, the Matron had a series of important meetings at her college --meetings in which she sometimes played a leading and visible role.
She was prepared! Fully loaded. In command.
But there was one section, of one meeting, in which she stumbled into relatively blind. Details are unimportant, but let's just say there was a 400 page document involved (supposed to be read beforehand) and this wasn't really the Matron's focus. She skimmed (okay, who doesn't skim a 400 page document) and thought: wing it.
During the meeting in which this document was to be reviewed and recommendations for future action planned, the large group broke into small discussion groups. There were 30 people in the room. The Matron could not remember one single thing about the 400 page document.
Small groups. In which to scrutinize, analyze and comment on said document that the Matron could not remember.
Matron: "Please God-Oprah-Allah- Universe-Buddha let me be in a group with people equally clueless."
Instead?

Here was her small group constitution: the Associate Dean of Academic Affairs, the Chief Financial Officer, one faculty member, The Provost and -- the college President.
Once she wiped the sweat off her brow, she did do her best to wing it. The life of the working mother.
But she did okay.
Posted by Minnesota Matron at 8:47 PM 7 comments:

Labels: she does it anyway, Way to busy to be blogging but wow

This is a second hand story. But true (yes, she's prone to hyperbole but this is reporting only with better prose).
Three months ago, the Matron and her husband adopted a sixty pound blood hound puppy. He has an acronym for a name: Boc. Abbreviated for Big Old Canine (she would upload pictures but Blogger has decided to make every last move as difficult as possible).
Earlier today, the Matron's beloved, John, took the wild, high energy puppy for a romp through the dog park. Boc rounded a random corner and John heard a wild and joyful voice call: "Freddie!!"
John turned the corner himself to find Boc beside himself with joy, on his hind legs licking a stranger's face.
Stranger: "Is this Freddie? Oh my GOD. This is Freddie. Boy, I am SO happy to see you!"
John: "Freddie was his name when we got him but now he's Boc. But if you gave him to XXX rescue, that's him."
The young man got down on his knees and embraced the dog; Boc was an enthusiastic participant.
Young man: "My parents bought him but had to give him up because he was so high energy and they have all these disabilities. Plus, they had an old dog that Freddie was just always trying to play with. It KILLED them. to give him up. I've been worrying about him for three months. I can't believe I'm seeing him again!"
A few minutes later it was clear this was the same dog -- plus, Boc was in heaven. He loved this young man.
Strange Young Man: "Please tell me he has a good life?"

Whereupon John explains that Boc now lives with three children, gets daily runs, has company all day long, another dog companion, dog park visits, super good food, many treats during the day, toys, and pretty much the ideal dog life. Plus, he gets to play specifically with Merrick all day long.
Merrick, in the van on the way home from school: "When I get home, I'm going to play with Boc for ten minutes, do four minutes of homework, play with Boc for 20 minutes, do 5 minutes of violin and then play with Boc for 20 minutes."
Good math skills!
Young Man to John: "Thank you."
One last rub on Boc's head.
And he walked away.
Crying.
Posted by Minnesota Matron at 9:30 PM 15 comments:

One More Lamb to Slaughter or Celebrity Success: We'll See 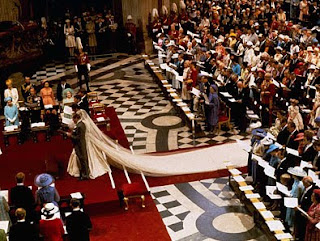 What is on her mind?
A royal wedding.
Tonight, the Matron had the choice of returning to grading papers, cleaning bathrooms, or watching a Dateline special on Kate Middleton and Prince William. Guess which won?
Oh. She could have spent quality time with the children but that's sort of not on her radar.
Now, the Matron has not written about this, but as a teenager she spent a solid year in the hospital for anorexia. Actually, she bounced back a couple of times but that's a memoir and not a blog post. Many long stories--and many, many years and recovery under her wider belt.
During one of these hospitalizations, Princess Diana and Prince What's-His-Name (okay, Charles, she knows), were married.
The wedding took place early in the morning, U.S. time. The hospital staff -- caring for all the wee anorexics -- woke everyone up at some ungodly hour (what? 4? 5 am? ) to watch the festivities. The Matron, then a Very Young Miss, will never forget the profound sense of irony as the emaciated teens watched the fairly tale wedding from their hospital perch, all wondering what their next meal would entail. At like 5 in the morning (trust her, many had been up all night doing push-ups in the closet).
If it wasn't so late, she would paint a stronger prosaic picture of a group of anorexic and bulimic teenagers watching this drama in the day room of a hospital, in pajamas and various stages of waste, watching Diana, the doe-eyed icon of femininity and grace who was also bulimic herself.
Digression: if she's ever in charge of an eating disorder program? No teenager will be woken up at 4 am to watch a wedding that focuses largely on the appearance and demeanor of the bride. You can quote her on this.
So yesterday's news that Prince William and Kate Middleton are to marry? Well, everyone -- including yours truly -- loves a spot-on narrative. Superior narratives include love stories and fairy tales, and even stories of the ordinary that supersedes (Kate). So she stood glued to the television watching preliminary celebrations of the nuptials.
But one part of her remains 16 and scared. Watches Kate and William do the required television round and notices the emphasis on fashion and body (uh . . .why isn't anyone talking about Prince William's fine choice of and fit into clothing?), and returns to an earlier, complicated time figuring out what being female meant. Remembering the first wedding, the life of the irrepressible Princess, her death (when the Matron had already recovered and become a mother), and all the young women watching in between.
Posted by Minnesota Matron at 6:06 PM 15 comments:

The Age of Anxiety

Yesterday and much of today, the Matron diligently attempted to connect to the internet from home. Remember, much of her actual TEACHING (income, health insurance, tenure!) takes place online.
Matron to He Who Cannot Be Named: "Are you downloading stuff?"

HWCBN: "Not really."
Matron: "What does 'not really' mean in the terms of actual internet activity at the moment?"

HWCBN: "Just some videos."
The end to the video download temporarily improved the problem but the Matron still suffered through spotty service.
Today . . . .
Matron to John: "This internet thing is making me crazy. I can't get on!"
John: "Uh, didn't I tell you?"

John: "We're upgrading our wi-fi connection. Things could be spotty for today."
Now, when the Matron thought that any minute she could be back on, she was fine. In her heart, hope really does spring eternal and sometimes without any evidence based in reality. But once she discovered there was no connection -- no access to blogging, to teaching, to email, to life outside of the physical confines of the home?!!
Complete psychological collapse.
She tried reading for tomorrow's lecture. And then attempted the internet.
Dishes. Internet attempt.
Walk the dog . .. briefly, because of that darn internet issue.
Matron: "I am lost!"

HWCBN: "Me too!"
Matron: "I actually try to get wifi from the car at red lights. This is unbearable."
HWCBN: "Who's going to monitor hulu and check on my various accounts, games and financial endeavors?"
Common ground! At last! They almost held hands and hugged, so adrift.
Matron: "Wait a minute. What financial endeavors?"
John: "You two are pathetic. Can't you go one full day without the internet?"
HWCBN: "I'm insulted."
John: "That I think you're unable to go a day without being online??

HWCBN: "Hardly. Insulted that you think such a life circumstance is acceptable."
John: "Mary? Where do you stand on this?"
Actually, the Matron is reinventing the end of that conversation based on John's reporting because she had already left the house: for a coffee shop with internet, where she plans to spend the next seven hours.
It's a good thing she's a communicator and not a shopper. There's really not enough budget in the world. . . . um . . .unless those financial endeavors come to fruition. Hope someone learned his kindergarten lessons about sharing!
Posted by Minnesota Matron at 1:45 PM 7 comments:

Social Psychology Experiment #2 revealed itself to actually NOT be social psychology, but a lesson in deep tissue, personal and intersubjective dynamics.
The Matron?
Utterly incapable of walking by a cluttered counter and not cleaning up.
Unable to restrain herself in the face of a round of boots and snow pants. These items must be picked up and stored or she will require institutionalization.
Incapable of leaving dirty dishes in the sink, let alone scattered around various floors.
Helpless in the face of dog hair, dirt and laundry.
Failure! And it is hers . . . . this is why Incurable Brain Suck is an incurable and terminal disease.
Of course, the rest of the family is happily enabling . . . .
Posted by Minnesota Matron at 12:02 PM 4 comments: