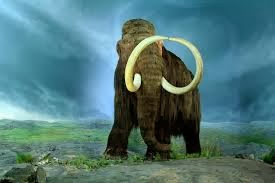 Like the proverbial Wooly Mammoth, the Matron also rises.


She knows that she's mixing themes, metaphors, images and otherwise mistaking animals and myths:   but what better way to announce her return?   For that creative itch has blistered its way into something undeniable and, scratch, she must.

Excuse her while she wiggles against a tree.

However, for this writer-mother-wife-teacher, impulse toward creativity alone wouldn't be enough to resume blogging.  This long quiet spell was spent frantically attending to college applications, teen procrastination, financial aid dramas and various psychological breakdowns and depletions allowed the Matron a few moments to reflect on the blog's origins, the reason she turned to internet in the first place.    Starting the blog was a bit about writing as activity and reward in and of itself -- that old itch.    But she realized that the blog's origins were also -- in equal and opposing parts -- about self-reflection and creating community.

Creativity, community, self-reflection:   the Matron feels like her current phase of life and parenting has once again positioned here there (self-reflection, in particular)  precisely.   There is something magical and dangerous about ushering a young person into adulthood.     So far -- for the parent --  this era has been far more  chalk full of life lessons  than any month spent with the five-and-under set.

So that potent combination of creativity and community brings the Matron here again.  She's ready to live out  loud again.