Eat Your Dinner: Don't You Know There are Starving Children In (next door, Africa and Pretty Much Everywhere)

A few days ago, the Matron gleefully purchased one of her favorite food-like substances:  Dairy Queen No Fat Fudge Bars.    In fact, the Matron likes these 50 calorie wonders so much, that she bought the Econo-pack of 12 to have some in the freezer.  They're a favorite with Scarlett and Merrick, too.
Not so much Stryker.
Skip to just two short hours ago.  The Matron finally got around to the first section of last Sunday's New York Times and read this heart-breaking piece on people--children--who live in garbage heaps.   You know how children might fall into middle-class swimming pools and accidentally drown?  Elsewhere in the world, children take a wrong step and drown in the liquid waste of garbage.
Just as the Matron was folding the paper, Stryker came skulking into the kitchen, in search of something 'cool and refreshing.'
Stryker (with genuine shock and a hint of outrage):  "Fudge bars!  Fudge bars!  I can't believe there's no ice cream in this house!  Why can't we have ICE CREAM LIKE NORMAL PEOPLE!"
And it was all she could do to stop herself from snatching that fudge bar out of his hands and shaking him silly!!   Thank God-Oprah-Buddha-Allah-Universe (in that order) that you are standing in the granite-counter high-end kitchen holding a fudge bar.   Really.  She wanted to scream.
Instead, she calmly asked him to put away the fudge bar and handed him the article.
Boy, transformed.   There's the power of the Word (and photo).
Posted by Minnesota Matron at 6:17 PM 8 comments:

The Results Are In

So throughout Adventures in Cardiology, the Matron has hung her diagnostic hat on the following words that fell from the (shockingly young, beautiful and, of course, fashionable) pediatric cardiologist:   "Two to three percent of everyone's heartbeats are irregular.  We only call this irregularity a disorder, disease or problem if the irregularity is as high as 10%.   If Merrick's irregularities are less than 10% of his total beats, we'll just monitor him annually and not worry one bit.  If the number is 10%, we'll have a conversation and discuss how to proceed."
Let's be clear.   Creative License and Reality frequently collide in the Matron's world (offline too) and License wins, every time.  Unreliable narrator!   Get thee to a nunnery!  But really and truly, the whole Cardiological Discourse hung on that 10%.  So the Matron has spent the past 48 hours fixated on that number:  "Please let the beats be less than 10%.   Less than 10%.  Less than 10%."
First thing in the morning, the Matron calls the clinic and points out that she got an initial (unheard, thanks honey) message around 1 on Monday but didn't get a call at all Tuesday --and she is a mama who is WAITING.  She was polite about this, but made note, hoping to impress upon the secretaries that she wanted the Word.
Within two minutes, the cardiologist called her.
First there was a long period of explaining how incredibly busy she had been the day before -- bombarded with the decaying, malfunctioning, pathetic hearts of children---urchins frail enough to require hospitalization.  Unlike your son, who is Just Fine which is why I didn't take time away from the limpid and pale to return your call.  The cardiologist very carefully explained to the Matron that when doctors don't call or leave multiple messages, you get to rest easy.
Truly.   The Matron is an educated woman with lots of degrees.  Many of her friends are doctors.  A simple "I genuinely didn't have a minute and I'm sorry" would've sufficed, without that fine, fine line of shame.  Indeed, the Screenplay the Matron wrote yesterday when the doctor didn't call reflected that sentiment:  he's fine!  She liked that narrative.
Duly chastened, the Matron thanked the doctor (because that's what you do) and inquired: "I'm so relieved he's all right!  But what was the exact percentage of irregular heartbeats out of all total?"

Here's where there was a good long pause.  And a breath.
"I believe the number was 9.9%."
Matron, absorbing how completely arbitrary that .1% feels, in either direction.
Doctor:  "So good news!   His irregularities did subsist when his heart rate went up.    He looks terrific.  Kids outgrow this, sometimes.  So let's see him next year for another monitor.  Ta-ta!"
She couldn't get off the phone quickly enough.
The Matron went along with the whole deal, pondering second opinion,  until the mail arrived.  The report must have been sent yesterday, along with the missed phone call.
And the official, documented results:   "Holter over 24 hours showed HR range from 61-194/min.  Average HR of 109 min.  10% Unifocal monomorphic PCV's."
That doctor did not want to have an honest, genuine heart to heart with the Matron.  She did not want to say:  "Look, he's at 10%.  But given all the rest--he's not symptomatic, his skin color is good, he's not complaining -- and that children generally outgrow this, let's monitor and not worry.  Should we talk about what to do when you're on the fence and it's a matter of judgment?"
No.  She didn't want to enter that color Gray into the conversatioin - where it belonged.  And that makes the Matron?

Angry.
You should put your ear to Merrick's bony chest.    Imagine you're his mama, hearing the beats that go bump  in the night, in a million weird ways, the new musical backdrop to your own heart.
Don't you think that woman deserves a genuine conversation?
Posted by Minnesota Matron at 6:27 PM 17 comments:

Please tell her:  do you recognize this scene?  The one in which the phone rings and your husband/S.O. simply walks by said ringing instrument as if he had no actual hearing?
In the Matron's home, the phone can ring while John stands two feet away and he does nothing.  It's as if the ringing telephone actually renders him suddenly physically incapable of moving in any direction toward a phone, whatsoever.
Here is the Matron when the phone rings:  short shot of lightening to check out the caller ID.  Now, she doesn't always answer the phone but she always assesses whether or not the call had Import or Not.
So when the Matron slogged home from work around 5 pm yesterday, there were several phone messages (because John + Telephone Without the Matron to answer = 0).  She listened immediately.
"Hello.  This is Dr. Cardiologist.  I want to talk to Merrick's parents about the results of the heart halter.  Would you please call my office and ask them to page me so that we can speak."
This message fell into that tree where if a tree falls in the woods and nobody hears it does it exist around 1:30 pm.
Dear husband was SHOCKED that he missed it!   "Really.  I never heard any ring, not once."

Of course not.  Because you are a man.
So today the Matron called the office at 8 am.   At noon she called again.  At 3 pm the cardiologist's secretary called to say that the doctor really wanted to speak with her but was very busy.  Hang in there.
There is nothing worse than not knowing.  Which is exactly how she spent her day, willing that phone to ring -- willing those little irregularities to be quirks and not landmines.   The Matron can read NOVELS into the fact that the cardiologist called so quickly and WANTED to talk to her. . . . and then an entirely different screenplay based on the fact that the doctor didn't call back!
She is creative that way, that Matron.
Tomorrow will dawn with strict instruction for the husband at home:  Answer the Phone.    Answers being the operative word!
Posted by Minnesota Matron at 6:03 PM 17 comments:

In which Christianity Takes a Hit 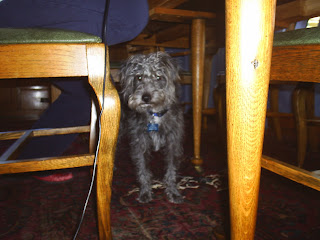 Remember Satan's Familiar? He of Cloven Paw and steel stomach? The Matron is certain he is here to remind her of Theological Shortcomings, All Type. You see, yesterday? That damn dog climbed on the table featured in above photo and ate the remnants of this (times 3):

Yellow Peeps, Reeses eggs, and Cadbury bunnies -- all in the Belly of the 15 lb Beast. And the Matron did what she has done before (although she can't find the post to link it!). She stood with ipecac in hand, pondered -- and decided to let nature take its course.

Of course, Satan Ruled. The dog lives to Eat, Poop and Escape again.
She's sure her pagan approach to Christian Holidays -- all Buddha and karma but 'Hey! There's Santa!' is messing with the theological ecosystem. Sorry, God-Oprah-Allah-Buddha-Yahweh-Universe.
But next time could you descend locusts? Walk in the park after the past two years of Dog Bodily Fluid, All Sort.
Posted by Minnesota Matron at 12:48 PM 6 comments: