Nineteen years ago, the Matron met her future husband.

She was sitting in a coffee shop, minding her own business with a book or four. The place was a long, simple line of tables and it was packed. Because no seat was available, John--newly arrived with a steaming espresso and a magazine -- asked the much younger Matron (in her twenties! nearly twenty years ago!) if he could sit at the empty chair at her table.

Yes, yes. She's written about this before but can't find the post. Lazy and unorganized about the blog.

He sat. They both read. Made small talk. Mostly, yours truly was annoyed that the gorgeous man beside her didn't make an overt overture. They read, chatted briefly, went their separate ways.

A week later, the Matron -- then a Youngish Miss -- had a startlingly vivid dream in which she accompanied the man at the table to Target to buy plastic dishes. Then they went to Jiffy Lube for an oil change in the minivan (really -- that dream happened and it was Jiffy Lube; you're allowed to read into this).

The Matron woke to this dream and thought: well.

Several days after that, she was preparing to drive to her then-boyfriend's house in Wisconsin, where he was working on a doctorate similar to Young Miss's. Both were semioitic and deconstruction slaves. Combing her hair in the mirror, Young Miss wondered if the boyfriend was the real one, the main man in her life for nearly ever.

Instead, a voice popped into her head that said: No, sweetheart. It's the guy from the coffee shop.

Reader, it was a VOICE. "It's the guy from the coffee shop."

Now, the Matron has heard clear messages from time to time. Her small intuitive flare has opened many doors and made her believe that life isn't simply science and logic (although those rule), but something she doesn't understand but can imagine.

So she broke up with her boyfriend (let's admit here that things there weren't going all that well) and went to the coffee shop the very next day.

And the next. Then the one after that. Then she sort of forgot about the dream, the intuition, the voice because she was in her twenties and there was more freight in life's immediacy.

She wandered into said coffee shop four months later for actual coffee, and lo and behold: there he was. John, sitting at a table, reading. Youngish Miss sat down and struck up a conversation which included her phone number and an invitation for a coffee date at another time.

She moved into his apartment a week later.

The day before they married in an outdoor ceremony with hundreds, it rained. Poured. They went to bed on a dismal, black and wet night. Because John requires absolute darkness for sleep, they grimly pulled the light-proof shades and shut out the torrents, abject about the day ahead and contingency plans that weren't all that great for over 300 people.

The next morning, Youngish Miss woke and the first thing she noticed was the sounds of birds. Happy birds. She snapped open the shade to the most spectacular morning she has since seen: vivid light, sun, sparkling grass -- everything was alive after the rain. Perfect.

That was fourteen years ago to the day. She's on video tape from that day, smoking a cigarette (sorry -- and yes, she's long given that up), drinking a martini (still doing that) and swearing off children as the plague.

Three children and many ups, downs, roads, narratives, challenges, and love later, she's here to say happy wedding anniversary to the man with whom she still wants to have coffee (and sometimes more).

Even if he can't pick up a piece of paper.
Posted by Minnesota Matron at 12:17 PM 10 comments:

Some People Should be Banned From Crafts

The Matron is one of them.

Over the past four days, Scarlett has labored over highly decorative messenger bags for her 30,000 (okay, seven) best friends She's ironed stencils, painted, glued. On Friday, the child is saying good-bye to elementary school and her cadre of dear friends.

The plan is that Scarlett's friends will carry these bags to an asusement park tomorrow when sixth graders are liberated for a day of fun and water. The girls are all aflutter about the bags, the t-shirts another friend supplied, the end of an era.

But the Matron noticed that while Scarlett labored over bags for her friends, she neglected one for herself. All of her dear friends would be carrying highly decorated bags, but she would not.

Finally -- after over almost TWO HOURs of driving and shopping, she secured the BAG.

Let's just say the Matron is incapable of ironing stencils in such a way that the letters are right side up. She put the E in Scarlett upside down. She burnt fabric. Glue burned. Glitter spilled. The felt melted at the iron. She squinted and knotted. And didn't enjoy any of the process.

At the end of four hours of creating Scarlett's surprise, she wondered why she wasn't familiar with vodka.

And when she picked up Scarlett from school?

Scarlett: "Mama!? Can we go back to that craft store? I really regret we didn't get a bag for me. Everyone else has one and now I think I should have gotten one for myself."

Matron: "I don't think we have time to do that tonight."

Scarlett: "Okay. But if we did find time, I'd like to have a bag like my friends."

And when Scarlett walked into the house and saw the highly decorative bag -- even with its flaws?

Chalk one up for the mom.
Posted by Minnesota Matron at 9:13 PM 13 comments:

How do They do it? 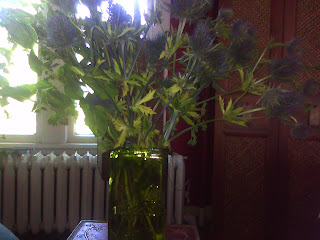 Look at this lovely vase. The Matron carefully constructed an artful arrangement of purple and green in her living room. Right below? This piece of paper has been on the floor since May 12th. Yes, folks, nearly one month. She will never, ever--as long as there is blood and breath pumping through her -- pick up this remant from a Giraldi chocolate square.
Here's another view: 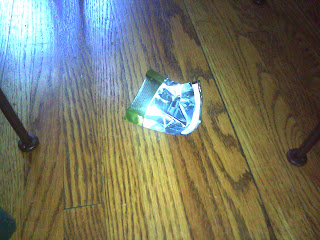 Perhaps the lighting makes this art? And that's why her husband can read the newspaper on the chair next to the paper and not pick up the garbage?
That little square scrap of paper may outlive cockroaches. Daily, each family member walks by this piece of paper without being bothered by its eternal existence. Even Scarlett--born with the UTD (uterine tracking device) -- is oblivious. That child knows where the gnawed pencil that Merrick used for homework on January 12 is, but she hasn't yet registered the garbage on the living room floor.
The Matron thinks that a month on the floor is quite spectacular, worthy of photo documentation (which doesn't come naturally as she has a new cell phone she can barely answer, let alone photograph from).
Consider this another installment of What Fell Friday, only on Wednesday.
Posted by Minnesota Matron at 6:49 AM 8 comments:

John: "Did you buy wine? It looks like the wine rack is full."

Matron: "I am committed to wine, butter, and cheese. All else can fall by the wayside. Just check out the pound of aged cheddar in the fridge-- not to mention the organic, antibiotic-free butter in the freezer. All is well."

John: "Oh my God -- can I rip off my clothes and carry you to the bedroom right now?"

Matron: "Absolutely not. There are no children in the house and I have big plans for the butter and cheese."
Posted by Minnesota Matron at 8:27 PM 8 comments: