Well, nobody's been quirky lately.
After nearly four years and 1500 posts, yours truly is in a virtual vacuum: what to say? Is there nothing new under the sun?
Like Scarlett O'Hara, tomorrow is another day. She's sure she'll be pithy, witty and wise. But for the past couple of days there's been pea soup and nothing magical. She also believes that just writing this sets the cosmic stage for excitement.
Hang in there!
Posted by Minnesota Matron at 11:29 AM 6 comments:

The Matron Must Hire a Hit Man, Again 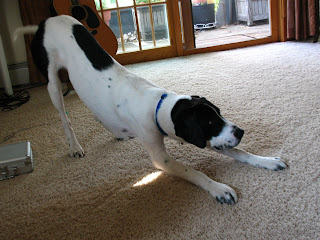 Regular readers might appreciate the antics of Satan's Familiar.
He poops in the basement with amazing regularity. If only everyone could be that reliable with bowel reduction.
His favorite place to sit? On someone's lap at the breakfast/lunch/dinner table. There are children in the household who foster this propensity.
But the new dog -- the now 80 pound blood hound has surpassed Satan's Familiar. Indeed Boc (sadly his name is an acronym for Big Old Canine, thanks to the children; the Matron preferred Othello) is stellar in the destruction arena.
Here are John and the Matron in the car on the way home from some event or errand.
John: "Dollar amount? How much destruction did Boc do today while we were gone?"
Matron: "Ten dollars."
John: "Eleven. I just won."
And he did. . .
Friends, not only does this dog eat socks, t-shirts and leftover food, he has an amazing ability to steal knives from the dishwasher. How he opens that it beyond her intellect, but he does.
Routinely, children are terrified. This is the end of March in Minnesota, which means the Matron wipes up all kinds of footprints and cleans up after Boc finds leftover goodies in the backyard from last spring (yes, we're talking poop).
Satan has landed the Matron another henchman.
But at least she can target the dogs as the rule of the devil instead of the teenagers. The young people should kiss each snout every day and thank their lucky stars that another being in the household is pure evil.
Posted by Minnesota Matron at 8:29 PM 3 comments:

Monday, the Matron went to a funeral.
She never met the man who died; he was related to her in a married sort of way and discretion shall prevail here. Let's just say there might be a brother or sister-in-law who lost a parent. But the Matron's husband knew the deceased well and demonstrated that he was capable of tearing up for 9 hours without pause.
Let's just note that the Matron was mightily annoyed about the whole funeral event, despite her spouse's investment. First, her children were on Spring Break all last week. Spring Break is a really bad idea, especially when it's 32 degrees and there's six inches of snow on the ground. Mostly it means trying to work while also feeding children.
Merrick: "Mom? Can I have lunch?"
Matron: "No!"
That's sort of how it went.
So there was juggling the jobs and the children for a week and the Matron was LONGING for Monday when they went back to school and she could catch up on work. Think! From 9:17 (not that she's counting minutes) until 3:22, there would be time to work.
Then, inconveniently, on the first day children went back to school, the Matron and her husband spent the day at a funeral.
The drive to and from the event? Over two hours.
The funeral itself? Nearly two hours. We Catholics know how to rock and roll. Ahem, she means stand and kneel.
But as the Matron sat in the church, crabby and critical of the artwork on the walls (really, really, really bad and let's just say the artist aimed for something beautiful and fell on his/herbelly) she couldn't help but listen to the sermon and eulogy.
A man who raised ten children died. There were nearly 50 grandchildren and already half that many great-grandchildren. They were all there and the emotion in the church moved even the crabby, non-committed, uninvolved Matron, who never met the man.
Let's pause here. If you're planning a funeral?
Here's what you do: have those 10 children, nearly 50 grandchildren and various great-grandchildren sing The Lord's Prayer in unbelievable harmony. Because that's what happened. The priest paused the traditional (LONG) Catholic ceremony to say the family had something to offer.
Fifty people harmonized to the Lord's Prayer.
The Matron is not a Christian (okay, stop following her right now if this bothers you -- she's a hard-core Buddhist) but that song? Breath-taking.
Here's how they sounded.
Well, okay. Like 20% of the King's. And that's good enough for her. Sort of sucked that crabbiness and impatience out of her and swung her into the present moment, in a church full of 200 grieving people.
Here's to the ones we love and how we lose them. Sort of the universal connection.
Posted by Minnesota Matron at 8:32 PM 3 comments: