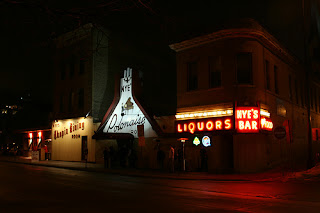 Not only was she anticipating the arrival of Mrs. G, but preparing for her sister and, well, perhaps 200 people.  That's right, folks.  Each year, the Matron and her husband host The World's Greatest Potluck.   Consider "world's greatest."  This would imply a bar, high.

A hundred or so people -- creaking toward ninety, spry 20 somethings, toddlers, sixth-graders on bikes and their parents -- descend on the Matronly environs for a kick-ass party on July 28.   The street is blocked off.    The part starts with backyard theatre, a play Scarlett produces (which involves 20 children rehearsing three hours a day for the next week which is another blog post).  The St. Paul Fire Department swings by with a rig for a tour; their Police counterparts do the same with the squad care.  There's a pinata for the younger set and a band!  Music, alive and in front of you.  Dancing is sometimes involved as is a large keg of Summit beer (you Minnesotans know).  This party has transpired every year, starting in 2000 when the Matron became Dr. Matron and determined Celebratory Activity was required.  Things just snowballed from there.

Can she interject right now to note that no public servant -- police officer or firefighter--  in 13 years, has ever even consumed a single crumb off a table FULL of a variety of food so delectable that words will not suffice?   Not even a brownie.  This really squashed the Matronly stereotype of the doughnut guzzling guy with a badge.  Instead, our public dollar has been 100% devoted to complete and thorough community service, as for 13 years, different police officers have dutifully opened squad car doors and let three year olds hit the siren.   Thank you.

Naturally, given that the next two weeks would bring in throngs of people to the Matronly estate, a blogging celebrity and a relative, yours truly did what any woman would do:  started a new book.

Not just any book, dear reader, but The Gathering by Ann Enright.  If you have hands, use them now to purchase this item on your computer:  a.m.a.z.on.   Worry about independent booksellers after you've read this gripping, lovely, one-of-a-kind story.  If you've ever felt like you're falling apart in the middle of your own life, this book is for you.  It was for the Matron.

Between pages, the Matron popped up her head and pondered:  Mrs. G!  Theresa, the sister!  Those 200 guests!  Three hours of many children ripping through her house for the next six days!  Building a set!  This instant was enough to immediately lead her to pop right back down into those pages.

But . . . she eventually ripped herself away to mop some floors and shine windows.  Flowers were plucked and propped into vases. All that evidence of little boy pee around the toilet rim (you know what she means, mamas) dutifully disappeared.  In fact, the Matron sacrificed her book to clean her house.  This is akin to a kidney.  She vacuumed, swept, dusted, polished, primped and scoured from Monday dawn to well after dusk.

Tuesday, she could hardly contain herself!

Matron:  "Heather!  I'm so glad you're here!  Remember those kids in high school who said they never studied for the test but you know they did?  Or the women who say they didn't 'do a thing' and the house always looks that spotless?"

Matron (warm greeting set aside in service of SELF):  "Well, I am NOT one of those people.  I scoured this house honey."

This particular guest was so incredibly low maintenance that the Matron believed her:  Mrs. G did not care that dog hair added a sheen to the couch, Merrick's arsenal masqueraded as posh porch decor or that breakfast was 'uh, here's the fridge.'

No doubt, this would make any hostess happy.   Matronly delight was further solidified when she met other derfs at Nye's on Wednesday:  Claudia, Nina and Kristen.  Here, self-restraint was required.   Instead of saying to Kristen: "OMIGOD you have the most important job in my life and here are Merrick's test scores" she said:  "wow, you coordinate English curriculum for the school district.  Cool!"

She now has an Oscar in her closet for that one.

Nina, she wanted to grab by the collar and ask:  "Your son works for you in the same business and building and you are still standing?!   Give me some of that powder!"  Instead, she affirmed the details:  successful business, adult children, grandchildren.    Surely there was some magic ticket?

Claudia of Idiot's Kitchen?    Complete Matronly dissolution.  A woman who could not only cook and live to write about it, but could read music while playing an instrument.  Both at the same time!   This is a skill the Matron once attempted, only to break her tailbone and sit on a physician-mandated cushion for six months of poor clarinet performances.

All in all, it was a time of great satisfaction, good food and conversation.   The Matron,who has not yet recovered from the thrill of receiving business cards when she earned tenure, is anxiously awaiting emails from the women who received these novelty cards.  Hint.

The end game?   After all this?   The hoopla, anticipation, anxiety and events ahead?   Here, the Matron found something other than what exists on the surface.

A life out there in the world -- yours, mine, ours, anybody's -- is important.  Worth reading and worth writing.   Worth paying attention to.   The past few days and the week ahead actually isn't about that crystal toilet rim but the little boys who use it (sorry, can't help herself with that one).   She plans to sacrifice duty for conversation and life, more often.

She plans to document hers--life, that is --  more often:  three times a week.  Showing up.

Thank you Kristen, Claudia, Nina, Denise and Heather.  She appreciates that you each may have no idea exactly what you did, but thank you!

Kristen, can we talk about fourth grade?  Merrick is at JJ Hill and on another note,  the Matron thinks bribing teens with talent is not a bad idea.
Posted by Minnesota Matron at 9:47 PM 8 comments:

Mrs. G. is traveling the nation visiting the crowds who loyally follow her blog.  We're going to be at Nye's (Minneapolis) at 6:30 Wednesday night (July 18).   Would\\ love to see one and all of the local folk!

Mrs G. . ..   for friends who read, have no idea what this means but think that Wednesday night out of the house is a pretty darn good idea!
Posted by Minnesota Matron at 10:06 PM 5 comments: