Once Again: Her Life in Movies

Thanks to her locale (coffee shop) and phone (broken) current picture options are limited.  These are in no WAY doing the beast justice.  You'll see. 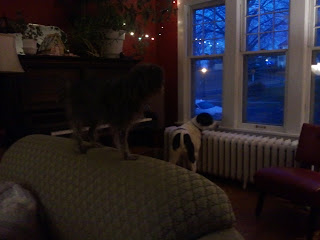 This might be a pretty picture -- deep red and eerie blue  -- except there are two animals in it, spoiling the mood.   Satan's Familiar Scruffy has his little cloven hooves on the couch and Boc is planning dinner people-watching.    Take a second look at Boc's hindquarters (just what you really wanted to do).   That is the energy source of a locomotive.   Poised.

Below,  consider the neck -- thickness traditionally the sign of a lout, brutish but strong.  Tough guy. If this dog was human he would be lifting weights and swilling beer.     Don't be fooled by the 'come hither' face and soft eye.  It's a lie.  He would also be slugging. 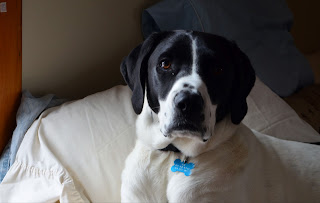 Yes he is on the bed.  On the sheets, a location with which he is highly familiar and extremely comfortable.  Why shouldn't he be on the bed?  He is Man-Size, after all.   That dog weighs just over 90 lbs.

Wait!  So does the Matron! 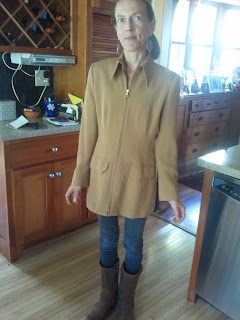 Observe the utter lack of 'lout' in the Matronly presentation.   Note the moniker "Matron."    This may connote a certain strength but it is of a stubborn, psychological nature -- decidedly not physical.   Matrons actually totter.  We clutch handbags.  We're aging.

Toe-to-toe in the weight game, Boc is the clear victor in velocity and mass.   The Matron has been dragged across many varied terrains by this beast.

Boc sees something of interest -- a bird!  a dog!  a toddler! -- and off he goes, with the Matron doing her best (from the unfortunate position of belly bumping at high speed along the ground ) to hang onto the leash so she can continue her ineffective shrieks of "Stop!  Stop!"

Alas, see this orange Tic-Tac stuck in the corner of the sleeping dog's jowl? 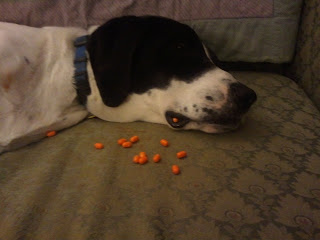 That is actually the size of his brain.

He is too stupid to finish his Tic-Tacs.  When was the last time you fell asleep, eating?

On Monday, the Matron took her life in her hands and walked both dogs -- together -- Boc secured in her stronger right hand, taught in a brand-new harness promising  to give the owner "Command" and "Mastery" over their beast.   Scruffy scurried along the left.

Until Boc saw a pretty little gray cat sitting in the yard of a neighbor who the Matron does not know and has never met.  It's a well-kept, vivid and lush lawn full of flowers and green; there are little gates and rocks and fussy stuff that pleases the Matron, while simultaneously reminding her that her yard will always look much, much different.    The Matron does know that a woman -- well, well into her own matronly years -- lives here alone.  She seems like the peaceful sort, puttering in the yard and what-not, with a straw hat.

Wait!  Here comes the woman, straw hat and all, rounding the corner of her house just in time to see Boc KNOCK OVER the Matron, break free from the leash (exact opposite of command and mastery!!), and roar into the fenced-in yard (gate ajar) to chase the cat!!!

The woman screams!   The Matron screams!

The cat!  Does what any sensible creature would do and RUNS INSIDE THE HOUSE.

(Sidebar:   read conversation below in high, hysterical and speedy pitch)

Matron:  "Can I go into your house and get him?"

Woman:  "By all means."  She can do a mean eye-brow raise in a crisis and launches this look while taking Scruffy.  "Let ME hold onto THIS one.  So ANOTHER one doesn't get in."

You know those feature films - major motion pictures where Dogs Do Bad Things, like wreak havoc with sugar and flour or chase dog-hating middle-age men and rip their trousers  . . those sort of scenes demonstrating just how Bad a Dog Can Be?

The Matron entered this.

The cat flew  -- like Spider Man -- from couch to chair to counter to hallway to kitchen -- with Boc in hot pursuit.  He knocked over a coffee table, lamp, tossed pillows, moved the living rug ten feet, hit walls, and tumbled a pile of magazines.  He plowed over the nearly catatonic old dog stumbling around the kitchen.  By plowed over, she means knocked over.   Yours truly set the poor thing back up.

All this to the tune of the Matron screaming:  "STOP STOP STOP" while she too takes up the dance, stumbling in Boc's wake through pillows, rugs, couches trying to catch the leash . . until.   The cat races down a loooong hallway into a room that seemed so very, very, very far away -- so INTERIOR.

So deep --and definitely inside someone else's house -- where her dog was chasing a cat.

Into a room  where the cat hid.

Woman (EXTREMELY anxious to get away from the Matron and back in her house to verify all):  "I can't believe that dog went into my house.   Thank you for getting him out!!!"

Woman:  "The side door was open -- how the dog got in.  I never should have left that door open."

Hundreds of years of women apologizing rose up before the Matron.

And here the woman paused -- just for a minute - to look a little harder at Boc.

The Matron, limp with exhaustion and anxiety, took feminist history and that damn dog immediately home.   She made herself a good strong cup of tea and relived primary fact:  her dog chased a cat into someone else's house.  And chased the cat IN the house.  Knocked things over and terrorized.  Like in a movie.  Then the homeowner apologized as it was HER fault for . . well, being home.

Later, the Matron brought that neighbor the most stunning, artful, memorable bouquet of flowers that her garden -- and two stores -- could manage.    Maybe, just maybe, she made a new friend.   The woman couldn't believe her good luck!  Flowers!

The Matron was happy and alarmed that no law suit was being mentioned.