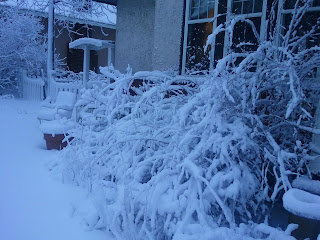 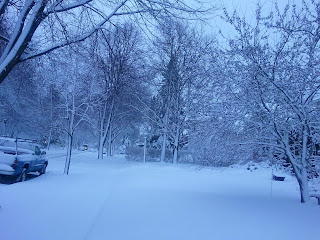 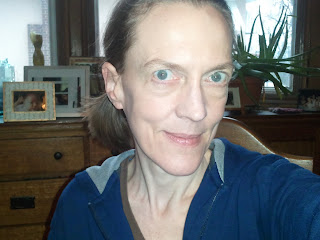 Perhaps the Matron herself has the Vitamin D blues?    No.    Friends, this may be hard to believe but the Matron pretty much forgot about her blog!

The massive, freighted, long-awaited, and somewhat dreaded 50th birthday brought yours truly to a long journey defined, in part, by yoga and meditation.   She has spent the past few weeks fully rooted in the body and moment.    But that itch!  That darn creative tug!   Got her again and she's back to blogging as Versatile Creative Outlet.  Or maybe it was the haircut that got her back here again - you know, fresh, springy start?

Today is all about the update, readers.     No major Matronly changes other than hair . . . oh, and this! 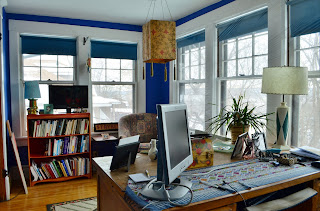 This is the Matron's office.  Yes, she loves this space very much and who wouldn't?  Right outside of those pretty windows is a panoramic view of the Twin Cities, thanks to the beautiful river bluff along which her family lives.   But the deep hue blue is the story here.

Several weeks ago, yours truly mentioned to her beloved that a friend's bathroom (yes) was The Perfect Color for her office.   She clutched her chest and sighed with joy, just thinking about that precise blue.   A color like that made peeing a pleasure!  Just think what it would do against her white woodwork and windows!  John nodded and slurped, as he was doing man-like eating (another blog post) during her discourse.

Imagine her surprise when she came home a week later to find her previously sage green office the precise shade of blue!   That man she married had called the friend to get the paint number, purchased a bucket, undid the office, painted, and put everything back together again while this little cat was away.   The Matron herself didn't lift a delicate finger.  This demonstration of love after 21 years together.

Of course, she cried.   Now that blue?  Even better.

Speaking of better -- Merrick is. 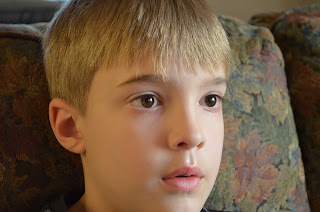 Every night his mother plugs 5000 units of Vitamin D into that meter and she imagines those units immediately off to work:  beef that boy up!   He is fully returned to himself and that boy, returned to his mother.  She likes this relationship much better than the one with the soggy child on the couch.    Unfortunately, Vitamin D hasn't made Merrick appreciate the value of education, bathing or broccoli.     Still, she can hope.

Scarlett is not just a blog post but a novella.    In August, the extremely-amazing-intimidating ENT specialists at the University of Minnesota broke the following news to Scarlett and her parents:  1)  the vocal cord nodules were nearly gone and 2) in their stead, erupted an ugly lesion and hemorrhage.      On the outside chance that this career-threatening injury could heal without surgery ( and trust her, it is not as simple as "Adele did it" which she would appreciate not hearing) Scarlett was ordered on a month of silence.  So that child got an official bona fide medical leave from school and stayed home with her white board.

And her mother.   The Matron is not sure who experienced more internal dialogue and upheaval during that month, but try for a moment to have a teenager utterly home bound for a month --and following you with a white board.

She has long returned to school and the miracle did happen:   hemorrhage and lesion are now things of the past.  The vocal cord is still in recovery -- all swollen and soft and partially effective -- so Scarlett remains outside those theater doors, marking month six without a show.    Much to everyone's surprise but Scarlett's, she has revealed reservoirs of resilience, wisdom, and wit -- characteristics that her mother (however adoring) didn't even know her daughter had.

But dedicated readers will know that theater is hard-wired into this child so she can reassure that this has not been a divorce-type situation.  Scarlett attends a performing arts high school and so gets to sing (sometimes), dance, and act (using voice sparingly) every day; she is also serving a local theater in various non-acting capacities.

Scarlett is not biding her time but making the most of it.

Proud Mama!  Here is the Matron with her daughter, heading off to a fundraiser with a wardrobe challenging 70s theme. 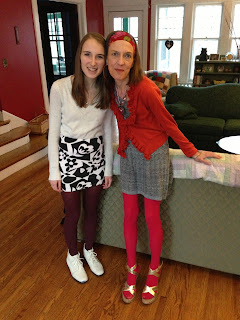 He Who Cannot be Named (HWCBN) will receive another academic award at his high school this week, honoring the top ten students in each graduating class.

About a month ago, this is what HWCBN said to his mother:  "Things are going really well for me right now. I'm happy!"    He was a little surprised by points A and B in that statement:  things going well, happy.     The Matron will confirm that this is indeed reality and not wishful thinking.

You know those all important college tests, the ones where your score actually DOES matter?   Good -- extremely good -- news on that front.  You know that social piece, where it's nice if people in high school actually like you?   HWCBN was given the junior spot as "prince" in the "Winter Court," a winter-type Homecoming (and if you could see the snow still on the ground you would understand why Minnesotans require Homecoming type events in January).

The Matron pretty much summed up her beloved with the paint story:  he is still on bended knee, at her service.   Plus he does all kinds of manly things besides eating.  Satan's Familiar can still yip the stuffing out of  Thanksgiving and the coon hound (Boc) has grown into his full, two-year old majestic self.   At 90 lbs, he can take out the Matron with a hearty tail swipe.    She just winces and ducks when he runs down the stairs to hurl himself at her as evidence of his undying love.

And all she is left with is a fresh layer of dog hair.  It's sort of like fairy dust, that stuff.

The Matron has scratched that creative itch and scratched the surface of her tiny, messy, expansive, singular life -- which she is very much enjoying and plans to share again.  Here.