If You Want to get Angry, Quick

Here's a link to a live feed of the BP oil spill, courtesy of PBS.
Now, the Matron is a well-known leftie and enthusiastically cast her Obama vote. Even so, she was prepared to be, well, disappointed. Politics is the art of the possible and compromise, even for the articulate and intelligent.
But her government's tepid response and what -- five weeks before the President tours the carnage?--sorta lowers that disappointment bar.
Posted by Minnesota Matron at 7:50 PM 4 comments:

The Matron is an unapologetic American Idol fan. As she types, she's watching Janet Jackson embarrass herself on national television. But that's nothing new.
Earlier in the show, Christina Aguilera belted an anthem. The Matron had chills and it wasn't about tonight or really, Aguilera.
The Modern Language Association requires one uses last names (after first introducing with a full name) and the Matronly sensibilities disallow her from veering from this requirement. Which is why you have Aguilera instead of Christina.
Many years ago, the Matron was sitting on an unfinished dissertation. She had two small children, babies really, no time and a diminished ego. Aguilera was about 14 and appeared on a Barbara Walters 'Spectacular Women' special or some such thing.
Note how she wrote "Barbara Walters," thus laying the groundwork for later use of "Walters."
As the Matronly memory goes, an ambitious, raw, teenage Aguilera said to Walters: "I've wanted this --success as an artist --since I was three. I've worked every day of my life, devoted every minute of my existence to becoming a singer. I get up at six and start working on my voice. If I'm not training --which goes beyond just singing -- I listen to music. It's all I do. Every minute of my life is devoted to achieving my goals."
The Matron was captive by the look on this young woman's face, by her transparent ambition, drive and focus. Inspiring? As God-Buddha-Oprah-Allah-Universe is/are her witness, the Matron took that unfettered ambition into her soul at that moment -- a TELEVISION moment, mind you and quite uncharacteristic -- and swore in the face of Christina Aguilera, much like Scarlett O'Hara did when she clutched soil and vowed to 'never be hungry again,' that if a 14 year old could toil endlessly to achieve her dreams -- big dreams-- the Matron could pen a dissertation.
And she did.
Thank you-- Christina. First name basis seems right. 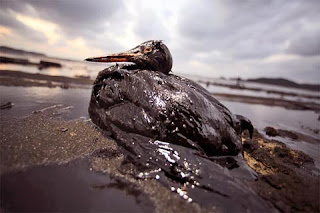 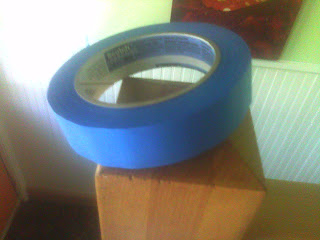 Gentle Reader,
Remember the operatic perspective on how three items fell to the floor in the Matron's house and remained there for nearly 8 weeks until the Mother-in-Law came to visit and said: "Why is there a Diet Coke on the floor?" And picked it up.
Today is Monday, May 24. This would be seven days past Monday, May 17, which is when someone -- Scarlett? John? (not Stryker as he would have been in the hospital suffering through that emergency appendectomy) -- set this role of blue electrical tape on the banister leading into the basement.

This is right off of the kitchen in a high volume area.
Adults walk by this every day and next, walk into the basement, where the tape could very easily be put away.
One adult - -let's say this grown-up is a woman and therefore has an UTD or Uterine Tracking Device-- immediately noticed said tape and made an informed (and, yes, slightly crabby) decision to not touch it.
The other adult, much like the three children, appear untouched by and unaware of this item that needs to be put away. It might be possible for all four of them to walk by a Llama on the landing and not say -- "Uh, does this require my attention?"
Day Seven. Let's keep track!
Posted by Minnesota Matron at 6:10 PM 11 comments: