Did She Mention She's on Vacation?

Yesterday, the Matron introduced Merrick to New York City. He was completely befuddled.
Merrick: "Is thewe a faiw somewhewe?"
He couldn't get over the body to body sidewalk flow. But the Matron was happy because he willingly (desperately) held his hand all day!
Yesterday was FAO Schwatz (Merrick: "Thewe is nothing to BUY hewe"), American Idiot on Broadway (for the big kids) and a night at the Waldorf-Astoria for everyone. Yes, she had a 'coupon' for the latter.
But in the midst of vacation-festivity and relaxation - the Matron goes to bed with night sweats.
* Two out of four classes require prep (reading, tests, syllabus, everything) for fall. Folks, it's a lot of work.
* New degree program at her college and guess what? She's THE department in the brand new Gender and Women Studies Department. Uh, and who's going to plan all that?
* Two new bosses: new Dean and college President
* OMIGOD. A book contract means you have to write a book. She has one. Must write book.
* After three callbacks, Scarlett did not get a part in the Children's Theater's holiday production. Hard.
* Stryker didn't get into the high school of his choice (lottery is how it's decided) and the Matron is examining all angles.
* Merrick can barely read.
This is how she spends her vacation, post-11 pm, nightly.
Posted by Minnesota Matron at 6:30 PM 9 comments:

Her Feet Are Killing Her 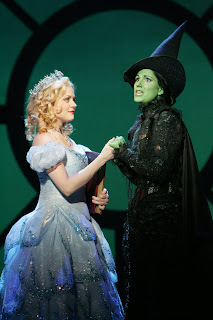 The Matron and various family members (except Merrick) have spent two days walking through New York. Her whole body aches -- we're talking 8 or 9 experiential moments every day.
Today, her laurels were allowed to rest for 2 and 1/2 hours during Wicked!!
The Matron had permanent goosebumps once the singing started. She immediately suspended disbelief and was all: "OMIGOD."

Scarlett was much more technical: "Mom, I think the mic sound is a little obvious. And did you see that costume change? Both changed within 45 seconds, which means they had at least three people helping them. You just stand there with your arms out and people dress you. Did you notice that you can see the chords for the flying monkeys if you trace the line from their back to the ceiling? I don't think that's good. The original cast members were better."
This from an 11 year old who (among other accomplishments) recently had a title role, a 45 second costume change and three helpers herself -- at the most renown children's theater in the country.
Notice how the proud mother managed to work that into her blog post. She's so efficient that way!!
But the best moment of all -- when the Matron knew the day was a success?

He Who Cannot Be Named, who hates all things theater said: "That didn't suck. If I had to see a play other than American Idiot, it might be this one -- mostly because it didn't suck."

The Matron Goes to Boot Camp -- Wait, She Means the Letterman Show

Uh, sorta like the 'go to jail' card in Monopoly. Please, Letterman spies with software throughout the internet, don't get her wrong. She loves Dave. Adores the show. Regular viewer and all that.
But the thing that surprised the Matron was the mechanistic, complex machinery that indoctrinates and ushers in the audience.
First, you must come forty-five minutes before you actually really DO show up. That first fake sign-up also involves showing your driver's license 78 times to 33 people. This takes about 20 minutes. Then they tell you to go away, but come back in 45 minutes.
One of the main things the audience learns in that first non-session is that there are NO BATHROOMS available.
Every middle-aged mother in the room gasped out loud. Some of us held each other -- total strangers -- in shock and for support.
When you come back 45 minutes later, you are the recipient of a long list of instructions (while standing in numerical order for half an hour in 90 degrees), that included a warning away from high pitched sounds like "WOOOO" or lamenting sounds like "AW." We were also schooled in how to laugh and when - and at what velocity.

Funny Guy Laying Out the Rules: "People incapable of following these really complicated instructions will be removed from the audience. We'll drag you out, manhandle, and toss you in the street."

Ha-ha. The jokes are David's job, honey.
Once inside, the audience is consistently, thoroughly oiled to be 'on.' There is a LOT of hand-clapping and enthusiastic leadership from ushers (some really boogie with the hand-clapping). By hand-clapping, the Matron means to the beat of whatever music is roaring through the auditorium, whether it's the band (also amazing) or the piped in stuff.
On this second, more real trip, the audience learns that people who genuinely can't go two hours without a bathroom, may sit in the balcony. A stampede of middle-aged mothers moved to that line (not the Matron as she was thoroughly dehydrated per earlier instructions).
But during the show --which was amazing and Dolly Parton was the guest and artist --- at each commercial break, ushers descended like SWAT team members into the audience.

Usher: "YOU. AND YOU. YOU THERE IN THE RED, TOO."
And these people were removed.
Other ushers quickly sat in the vacated seats. The Ed Sullivan Theater is always 100% full during the Letterman show, folks. At the NEXT commercial, the humiliated rule-breakers were returned and a new batch of violators removed and replaced with even more ushers.
This is quite the payroll.
John to Matron: "Mary? What are they doing?"

Matron: "OMIGOD. No talking! We'll be dragged out and water-boarded next."
When the show ended--within TWO SECONDS--ushers pretty much screamed: "Get out!"
Well, then.
The Matron took notes. If only her household could run that way. Plus, a temporary replacement child when one goes bad? Ah, heaven.
Posted by Minnesota Matron at 9:05 PM 12 comments:

View From the Road

Driving to New Jersey, through several states.
Scene from the mini-van.
John, driving, with iPod and music.
Matron, ear-buds and iPad, watching Breaking Bad. This is her latest extremely guilty pleasure. The iPad? He Who Cannot Be Named received this as a gift from the Matron's 'baby' brother after Stryker's appendectomy. They are en route to said brother and his large, beautiful family.
Scarlett, iPod, listening to Glee.
Merrick, iPod, playing some kind of game.
He Who Cannot be Named (now referred to has HWCN), iPod and DS.
HWCN: "I know a DS is completely regressive, but I enjoy it nonetheless. Plus, I can't wait to destroy my cousins when we arrive."
And the Matron's take away moment? Not that everyone is plugged in and barely talking, but that HWCN uses 'nonetheless' in casual conversation.
And actually, he has given the Matron creative license on blogging during the family vacation.
Up ahead? Being the the audience for David Letterman, Wicked, American Idiot, Behind the Emerald Curtain and Life With Family (the last event not syndicated, televised or known beyond this blog).
Posted by Minnesota Matron at 5:49 AM 5 comments:

The Matron forgot to mention that she is currently on an epic family journey.
Here's what's transpired, thus far, as much as sheer movement goes:
Wisconsin, Illinois, Indiana, Ohio and Pennsylvania --where the family is right this very moment chilling at a Hampton Inn. Oh, the take away? Five states but they just started at 7:30 YESTERDAY.
Although nice blog material might be about bickering during 12 hours in a van, they were awesome Merrick got visibly punchy -- as in practicing for meth addiction -- around 7 each night, but otherwise, all was good.
The end goal? Tomorrow, they land in New Jersey to visit the Matron's little brother (oh, not so little as age drums on) for seven days and spend three of those in NYC for two major Broadway shows (Wicked and American Idiot), a tour of Wicked called "Behind the Emerald Curtain" -- guess who's going to that and it wouldn't be Merrick or Stryker --- and a once-in-a-life-time stay at the Waldorf Astoria!
Matron's couple of lovely take away moments on the trip?

Matron (from Wisconsin): "Hey everyone! Look at this amazing farmland?"

Merrick: "Do they have this in Amewica?"

Matron: "Merrick, we're in America."
Many hours later. . .
Matron: "Wow, you guys, look at these hills and this greenery --the cows, the horses, the bucolic expanse (okay, she never ever used the phrase bucolic expanse but you know what she means).
Merrick: "Do they have this in Amewica?"

Matron: "Merrick!! This IS America."
More later.
Matron: "Kids--check out this amazing forest and these valleys! What a wonderful, awe-inspiring landscape, the kind that makes you know something bigger than you alone exists."
Merrick: "Is this Amewica?"

Matron: "Merrick -- for the last time, this is all America. That's our country and everything we visit is in it, at least for this trip."
Merrick: "If you mean God, I don't think that's just Amewica but the wowld."
Okay, then my love . . . . but yes, when you're in South Dakota, you're still in the USA.
Merrick: "Can we stay in a hotel again? I LOVE the hotels? Can you live in them when you gwow up?"

At least he's verbal and enthusiastic.
More from the road as it happens. . .
Posted by Minnesota Matron at 8:22 PM 9 comments: