You Can Never Go To That House Again

Our kids go to a public Montessori school that is also an international peace site. The schools is known for attracting left-wing, hippy-dippy, peace-sign wielding families. 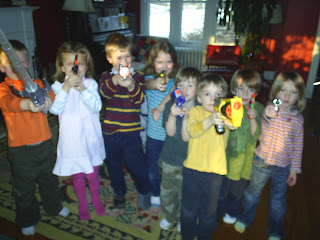 This is priceless. You have so captured the oldest child thing, and the anti-gun thing. I too was theoretically. opposed. But it got soooooo embarrassing at the park when my boys would salivate over, and covet the other boys' guns, I finally gave up. Now I'm just opposed to real guns!

ooh! heavens! we're not even allowed to have birthday parties in our montessori.... instead we "celebrate life" by singing and reading stories and eating organic miniature muffins...

That was too funny.

Oh god, Matron, just when I'm feeling good about my blog, I come over to YOUR blog and am blown away by your writing. Absolutely hilarious!

Hey, give a boy a Barbie instead of a gun, and he pretends to shoot bullets out of its head. I never bought toy guns (except for water guns - can't go without those on a hot summer day!), but the kids just make guns out of Duplos, or sticks, or whatever else is handy.

And cops and robbers is a time-honored game; really a good-v-evil motif, isn't it? Unless these children's parents don't believe in evil. Then I guess they could think of it as good-v-less-good.

Your observations and commentary are soooo funny and sharp and dead on. My husband often reminds me of when I was opposed to toy weaponry and like you I have 3 sons and an arsenal of plastic and foam. If you get any flack, you HAVE to post it. But this? Was the richest post I've read in eons.

I think the suburbancorrespondent is talking about my children.


The day I surrendered was the day I witnessed one of my little men take a bite out of a piece of American cheese and proudly announce... "Look Mom, I made a gun!"

you can't stop them from wanting to point things at each other and shoot. hmmm...

Oh dear. You are so busted.

(And I want a public school like that, hippy-dippy and all.)

Sandwiches and bananas make great guns too...LOL...If you do it right you can combine murderous playtime with excellent nutrition!

I LOVE this. You made me laugh out loud.

I have an over-attended first born son, and now have a PofLR (that's Path of Least Resistance) third child. I think my youngest boy is going to be a lot healthier without the laser beam attention from mom!

It's embedded in there someplace. You do realize, those, that you will be completely ostracized until those people have more kids. ;-)

Having spent the last eleven years dodging just about every variation of light saber made, I am in no position to judge. As I watch my son swinging them every which way and jumping around the yard battling blackberry bushes, I just file it under PE and drama and call it a day.

That's too funny. Yeah, if they didn't have toy guns they'd just make them out of straws or something.

This is GREAT! I hate guns, but have been reading a ton of stuff on boys and have been learning how healthy and NECESSARY it is for boys to play like that. Kind of counter intuitive, isn't it. It really does sound like the best party ever! Happy Birthday to your boy. Oh, and VERY funny on the school & kids' descriptions.

I also was (am) opposed to guns. But boys will find a way. They always do. I had to tell my 8 year old to stop drawing pictures of guns on the back of his classwork. LOL!

this made me laugh and laugh. my nephew used to make guns out of bananas.

and you want PC? send your kids to Waldorf. oh golly.

Hurrah!
One in the eye for the P.C. brigade -
Boys will be boys - thank goodness!

That is so darned funny, am really am laughing out loud....I bet some first time parents will have their righteous panties in a wad.

We used to be Gun Free, limit TV, vegetarian, etc. Left all that behind. At unschool gatherings here, the kids who had the most restrictions at home were the ones who went the craziest with Unhealthy Food, Guns, TV/Gaming.

Hey -- my boys loved potato guns! Not those spud launchers, but the ones that shot bits of potato. "Shoot-at-the-target-not-at-each-other-someone-will-lose-an-eye!"

Sounds like a great party! I think instead of planning games and all that other party stuff parents normally sweat over, I'm just going to let my son and his friends go wild with guns! They would have a 'blast'! tee hee...

i'm a good peace loving hippie dippy who gave up the no guns deal when my nephew chewed his toast into a gun shape and shot me. awesome party.

I want to send my baby to that school, and to your son's birthday party.

I just found your blog through the 'new from Blogher' thing and I LOVE this post!

Hilarious and too. true.

I bet it was the best party ever.

Hooray for play violence and mayhem. May the force be with you.

too funny...love this...it's so true, that no matter how peace loving the parents are, kids love guns, they love pretend, and your description of how parents can be, pretty funny.
thanks for my morning laugh, it went well with my tea.

laughed until i cried on this one. we too are in the 'hippie' group of people, being organic-granola-tree-hugging-csa-owners, and have many friends with the same thoughts on child-rearing. we too are also in the closet about my youngest daughter's love of anything that shoots. at her
6th birthday, she was so happy to get a pack of army men from a little boy, only to find that his mother had cut off all the hands of the army men that were holding a gun. in front of everyone she said, "oh, these men a ruined, they are missing the best part - their guns!"

i can't wait to hear the fall-out of probably one of the most fun days those kids have ever had. you know at least one set of parents will say something!

I can hear the screaming from here. Too funny.

I love your post title! And I wonder, how often was that statement uttered that night?!

well funnily enough, i didn't read this as funny.
powerful.
poignant.
loved the *path of least resistance* phrase, that's me with all five kiddos now.
gosh i love your poem,
fabulous X

I'm a year too late to raise the question: Why didn't any of the folks talking about boys and guns notice all those happy little girls, shooting away with glee themselves?

Don't ALL of us want to exercise a little power, and make delightful kablooey noises?

You're right, Jody! See the Matron, still checking her comments?

As a tv-limiting, granola-crunching ( ~ had homemade granola with 0% milk this morning), mother of 2, I saw the slippery slope to the path of least resistance and stopped at 2. In some ways, I'm so lucky to have girls so guns aren't usually an issue for this theoretically-opposed-to-guns mom!

Gave into my sons desire for toy guns. I even signed him up to make a wooden rubber band gun at Wonderment. I figured he would be learning all kinds of skills in cutting it from a piece of wood and putting on the finishing touches.