Michael Gerson has annoyed the Matron.

Here's his Washington Post headline: The label will stick: Obama is haughty.

If you're in a foul mood and want someone to swear at, go ahead and read. For the rest, the main points that most engaged the Matron were these.

Dr. Professor Matron takes umbrage! First, she will be the first to admit that P.H.D occasionally means Putty Head Dumb. Just ask her to add double-digit numbers. Second, she will point out the anti-intellectual impulse of her American people. Those who can't do, teach. In some circles, there's nothing more laughable than the wizened, puddling, pooling college professor, lost in his or her own blather.

This anti-intellectualism finds its roots, she thinks, in American egalitarianism, which is fundamentally a good thing, a fine ideal. Equality? Why, the Matron believes she's fought for that concept her entire adult life, in different directions. But not all brains are created equal.

Neither are all bodies. But Michael Jordan made millions for what his body can do. He's Role Model and cultural icon. Brain wattage? Not quite the same currency, cultural or otherwise.

Gerson proves the Matron's point when he says: "It is now possible to imagine Obama at a cocktail party with Kerry, Al Gore and Michael Dukakis, sharing a laugh about gun-toting, Bible-thumping, flag-pin-wearing, small-town Americans."

He also claims that Obama's way of analyzing and explaining "always places the explainer in a position of superiority."

The Matron wants to take Bubba out of the picture. She is not talking about some stereotypical trailer park resident, slugging Miller Lite and tuning into Fox. Let's talk about her lovely middle-class husband. He's the smart, capable average Joe, running a successful business. His collar is white. He is very good with numbers and can carry two children at once, in a pinch (although he has yet to build a fence that can contain Satan's Familiar).

He is not Presidential material. Neither is the Matron, who is still befuddled by the loss of the Soviet Union and unclear on fine distinctions between The United Kingdom of Great Britain and Ireland, Great Britain, and England.

Indeed, it is just fine with her that the future President is smarter than she is! My God, she hopes so!

The other underpinning of anti-intellectualism has some merit, however. The Matron's favorite French philosopher (okay, really the only one she knows) Michel Foucault famously posited that the ability to create Truth is the ultimate power.

Just consider what Truth--the one truth, my truth, the sole truth that I the wise one pass onto you--has wrought. Fundamentalism of all stripes, you name it. Truth isn't something that exists all pretty on a shelf and untouchable.

Truth operates in the real world, on bodies and in lives. Truth, certainty, fueled several men who flew airplanes into tall buildings.

So the Matron thinks it's important to question our academic and intellectuals, the religious leaders and the politicians who make proclamations, who produce Truth.

Oh, where are those weapons of mass destruction?

So she thinks that suspicion of those in the 'know' also has that more legitimate leg. But she's pretty sure that Gerson is building an argument solely out of that more problematic egalitarian mandate.

The Matron has another complaint. Gerson's prose leans just a little too hard on a "that man is too big for his britches" stance. The Matron also can think of a rather ugly historical phrase used for Black men in just that position. She wonders just how close a textual analysis Gerson's editors did. She hopes he has a good psychoanalyst.

Sounds like just what we need to get out of this mess.
Posted by Minnesota Matron at 12:01 PM 12 comments:

Boys Will Be Boys?

Political power? Seems to equate entrance into a very special Club. The Matron has no doubt that this Club has long historical roots, but here, she acknowledges one of the 20th Century's most prominent members.

This President is also a long-time member of the Club, in good standing

Everyone remembers the day Eliot passed his entrance exam and became a member. Here he is, family man.

And the moral icon who replaced him?

The Matron wonders if perhaps this is the only certain way to circumvent the Club's increasing popularity?

Who knows, though? Maybe Hillary will be pulling ambassadors into hall closets. A quickie in the Oval Office? Talk about breaking new ground and same old, all in the same fluid motion.

But the Matron is pretty sure the next President with the opportunity to join the Club will be this man.

Maybe he's in it already. The Matron hopes not. In fact, she doesn't think so. Because while Hillary did this

And Silda sucked in her gut for the sucker punch

And Michelle not only stood by her man, but had an affair herself-- helping deflect attention away from his wrong doings. Sorta like balancing the scales.

But the Matron? She doesn't think that this Michelle

looks like the kind of woman who would tolerate cheating. Not for one tiny second.

Yes we can! The candidate for change! The Matron very much hopes this extends to Club by-laws regarding sexual harassment, abuse of power, lying, and a general inability to keep little Hermie tucked safely in, home.

But if our next President should earn himself Club membership, the Matron hopes that the First Lady stands up for herself, instead of by her man.

What do you think?
Posted by Minnesota Matron at 12:09 PM 13 comments:

Searching for fresh faces, the Coen brothers have been seen scouting in local synagogues. They're holding an open call for three roles in a movie to be shot (possibly) in Minnesota: an eighty year old man; a sixteen year old girl who wants a nose job; and a 12 year old boy preparing for his Bar Mitzvah.

Of course, the Matron had this conversation:

Mother: "Are you taking Scarlett to the open audition for the Coen brothers movie?"

Mother: "Well, maybe they'll see her and create some kind of role for her. Those things happen. I'm going to take XX."

Mother: "Can't hurt! Maybe I'll call and see if they can create something for him. Your older son is eleven. What about him?"

Matron: "He doesn't look the least little bit Jewish. The nose job thing makes me think they're going for a certain look?"

Mother: "Maybe they can make some part for him. I think I'm just going to call about XX. There must be somebody I can call."

And then she had this conversation with someone else:

Matron: "Oh. Isn't WW ten? And female? Are they looking for that now?"

The Matron doesn't think that the Coen brothers are going to rewrite their script to include all of the child actors who show up and waste everyone else's time by creating a much, much longer line and more complex situation.

People, people.
Posted by Minnesota Matron at 8:43 AM 15 comments:

Yesterday was such a surreal pastiche that even the Matron's deft prose will never completely capture the complexities of the day. 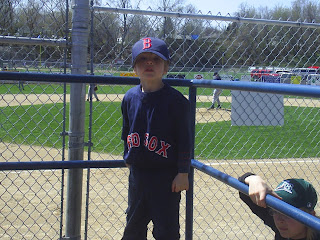 The Matron's neighborhood is in the very working-class, blue-collar East Side of St. Paul. Parkway Little League's players and parents reflect the racial and economic diversity of this neighborhood.

It is a place where a college professor can discuss a pitcher's curve ball with the tattooed toothless truck driver. If the professor were to know enough about baseball to actually participate in such conversation, that is.

"Good swing! Way to go!" That would be the Matron.

John (hissing): "Mary! He looked terrible. Nobody is cheering!"

Well, she is all about spirit.

Merrick's T-Ball activity was precious beyond words. Basically, the adults on the field directed frantic traffic as the five-year olds figured out where to go when once you hit that ball.

Merrick spent a lot of time looking in any direction other than the one a ball might be coming from. That's him in the middle, swinging his glove. 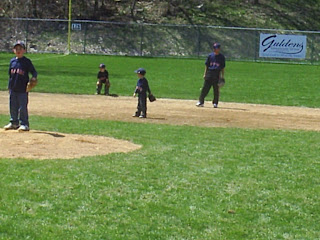 You cannot imagine the Matron's shock when she discovered that Satan's Familiar has a twin! 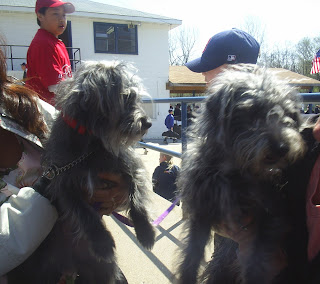 Griff is the adorable creature who does not poop in the house or jump the fence. He's on the left. If one hadn't been born in Illinois and the other in Minnesota, the Matron would swear they were brothers.

The Matron put on a Parkway apron and shoved hot dogs onto buns at a heart-stopping pace for nearly two hours. Did she mention yet that her family was at that field from 9:30 in the morning until well past 4 pm?

He not only showed up but decided going on the field during a game to take better pictures would be a really fine idea. Yes. He took his eccentric, chubby, elderly self onto Field 3 and asked Merrick to slow down, just one minute, so he could capture the moment at third base.

Someone asked the Matron: "Does he belong to you and does he need assistance?"

Later, Uncle XX fell off the bleachers and more or less rolled several feet! The entire Parkway fan base found Uncle XX to be a faster paced game than T-ball. He was the center of attention.

After Uncle XX had been dusted off and straightened out, he waved good-bye and continued on his Minnesota journey. First, he took the opportunity to introduce himself to many Parkway parents, shake some hands and pass out business cards declaring himself The California Ambassador to Minnesota.

Yes, he probably does need some sort of assistance.

That night the Matron and Scarlett stepped into an entirely new Universe at the second callbacks for Madeline and the Gypsies. 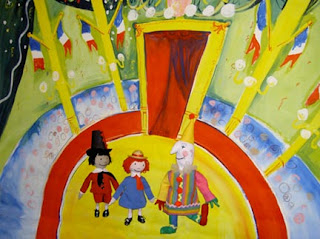 Scarlett presented her usual fatigued and disinterested front. But during the auditions themselves, when for some reason the children must have been instructed to scream and cause mayhem, she clearly heard her daughter giving the task her all.

There was lots of fussing over hair and anxious mothers. The Matron was taken aback by the presence of make-up. Nearly all of the girls--and we are talking as young as nine-- had lipstick, liner and mascara.

While the girls were gone, mothers instantly slipped into pairs or small groups and whispered intently. The woman in the pink sweat suit was back, this time in regular clothes. They spent the entire hour taking about their daughters. Suffice it to say those mothers are pros.

Their daughters are: in dance competitions; auditioning for the Coen brother movie; winning horseback riding medals; singing in contests and at fairs and for opening days of this festival and that; entering beauty pageants; auditioning, auditioning, auditioning; in commercials; modeling; and looking for new agents because, Goddamn it, my daughter deserves better than being a bit player in a print ad!

Afterward, Scarlett and the Matron entered the elevator with a mom clearly new to the scene, her teenage daughter who didn't audition and her younger daughter who did. The teenage daughter turned to her mother and said: "That was the most intense atmosphere I have ever been in! Those women were horrible! My God! You'd think it was them instead of their daughters!"

And the Matron smiled to see she finally was in some good company at this particular theater.
Posted by Minnesota Matron at 7:35 AM 14 comments: