Every hundred posts or so, the Matron rolls out an early blog entry -- written before her third person persona was fully realized. This time, she actually missed the landmark that is Post 1100 and is actually already on 1147! But every 100 or so, the diva of prose falls back on an old favorite.
This is an actual God-Buddha-Oprah-Allah-Universe conversation that took place between the deeply self-involved Matron and one of her best friends. She knows most of you have seen this, but every 100 posts or so she needs to put her feet up and gasp.
Over a Thousand Posts!
Really, this blog might be her third novel!
~*~*~*~*~*~*~*~*~*
I had lunch with a friend yesterday.

As in a member of the Top Five Friends, the first you call on the days corporeal punishment sounds, well, reasonable or when you buy that $188 purse at ValuThrift for $7.49.

Me: "Blog post. I started with four weenie ones in September and I'm up to 200."

Friend: "I always forget about that blog."

Friend: "Actually, I talk to you every day. Why would I read the blog?"

Friend: "Actually, I like you better in real life."

Friend: "You're funny in real life, too."

Me: "But I'm funny in a more thoughtful, well-done way on the blog."

Friend: "Actually, you're quick as a whip in real life. "

Me: "Now you're hurting my feelings."

Friend: "Sorry, but I prefer the real deal to the blog."

Me: "But I offer interesting political commentary on the blog. Gender stuff, too."

Friend: "Mary, you are Commentary, incarnate. In real life. You're just like that."

Me: "Oh my God. I can't believe you're saying this about my blog."

Friend: "I'm saying this about you."

Me: "But my blog is climbing in numbers! In just four months of steady postings I havehundreds of readers!

Friend: "Are these relationships? If their kids showed up at your doorstep, do you know what to feed them? Tampax or Kotex? Which bathroom in their house is for public use and whichstrictlyoff limits?"

Me: "I know them through comments. There are kids' names involved, like Nature Girl and Boy G. Mr. T and Mr. G. Wild Child. See?"

Me: "They put my name on their blogrolls: Minnesota Matron."

Friend: "That's not your name."

Me: "Yes, it is. And it looks good sitting up there for everyone to see, all shiny and taut: Minnesota Matron."

Friend: "Who are we talking about?"

Me: "But I wish you preferred the blog."

Friend: "Sweetie, you're always the center of attention. That's okay."

Me: "Thank God. I was getting worried, you hating my blog and all."

Friend: "Mary, the internet was created specifically for your blog. Online creativity can now take a rest. Can we order now?"

Me: "You like the blog--better? Prefer it to me in real life?"

Friend: "At this moment, yes. Very much so."

Me: "Thank you. Lemon grass soup?"
Yes, friends: the Matron is utterly self-absorbed. But in a way that's VERY interesting to others.
Posted by Minnesota Matron at 9:54 PM 2 comments:

If You Go to the Dog Park 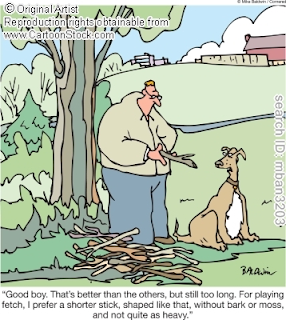 Now, the Matron quite likes the dog park.
She's lucky enough to live within minutes of just such a place: 30 bucolic acres, replete with ponds for paddling, fields for frolicking, and woods for otherwise pursuing.


This is an off-leash dog park. There are tidy little entry points with gates, where doggies can safely get unleashed and then -- boom! -- set free to race, chase, fetch and otherwise raise general Doggie Mayhem. Sort of what these critters were born to do.


Unless . . .
You are the person at the dog park who insists on leashing your dog. Really? The Matron wonders why these people subject their supposed beloveds to the torture of seeing their counterparts run free while they strain at the leash, a fur ball of envy and instinct.
You are the person who decides to do a U-Turn from that trail you were on and follow the Matron during her entire walk. No, she is not adverse to chatting with fellow dog-lovers. Oh no. The 'chat' is a vital part of the process.
Stranger: "Oh, what kind of dog is yours? He's adorable?"

Matron: "Not as adorable as yours! Look at how he gnaws that stick. What talent!"
That would be genuine, non-sarcastic chat at the dog park. Sort of like a play group without genetic stakes.
But . . . the stalker is different. He or she abandons independence and sticks to your side.
Stalker: "And then my neighbor's cousin lost her house to foreclosure. It wouldn't be so bad if their kids still had teeth. All those little ones rotted out because of sugar. Did I tell you about my husband's bunions?"
Sigh. The dogs can run free. The Matron? Trapped. It's hard to make a get-away: "Uh, I need to take that trail to nowhere right now?"
Yes, the dog park is a lovely place unless you are also the control freak. Now, the Matron does carry that funny bone herself, but it does not extend to dogs. One cannot make a dog 'behave.'
Stranger: "Charlie! Be a good boy! Share that ball."

Stranger 3: "I'm really sorry about my dog. He just likes to jump on things."
Hmmm . . . hog the ball, bounce at other dogs, jump up on bigger dogs? Sounds like a normal day at the dog park to the Matron.
But her all time favorite?
The person who brings ONE bright orange tennis ball to the dog park with his lone dog. Throws said tennis ball in the midst of a field of 15 dogs, all of whom immediately CHASE the ball.
There is an unspoken rule among dogs: each and every ball is MINE.
Alien with Ball: "Hey! That's Freddy's ball!! Get back!"
Not that this happened today at the dog park.
Posted by Minnesota Matron at 6:21 PM 1 comment:

Pinch Her. But Not Yet

This morning, the Matron woke up late.
She had a peaceful breakfast, worked out on the downstairs 16th century torture machine (an elliptical her family calls Bob), and then took the dogs on a leisurely (for her) romp through the dog park.
This was all before 8 am. And it made her happy.
There were errands to run, nothing out of the ordinary: Target, post-office, gas. She grabbed a coffee along the way and listened to talk radio, which is sort of her version of music.
You can totally rock out to political pundits and book reviewers.
Then, best of all. Peaceful lunch while reading a brand new book.
After that, she donned her psychological warfare hat and took on the house. Friends, what she accomplished is nearly orgasmic. Imagine Merrick's room, clean. The entire downstairs, polished. The workshop --- let us pause here. This is not a 'workshop' although there remains a semblance of industriousness in the shelves and workbench left, and built, by the previous homeowner. No, this is the Matron's Black Hole. It is a sometimes wide open space, a depository for everything else in the Universe that has no home.
Pants too small? Put them in the workshop. Old boxes that might be good someday? Report cards, old photographs, sweatshirt somebody left here, pot that blackened, tissue paper, half-written-in notebooks, broken toys, forgotten Pokemon cards, remote control jeep missing a wheel, shoes that might be recylced to another kid, winter boots, jackets, mittens, hats?
Workshop.
After an hour of mine excavation, one can now walk four feet into the room. This too, made the Matron happy. She then swept and mopped every floor in the house. It is a big house. Her knees hurt.
She took the dogs on an unheard of SECOND outing, this time just a few blocks around the house. In a particularly bold move, she drove to a nearby convenience store --aptly named, she thought--and purchased a bag of lime chips which she ate while reading a book and watching Hawaii-Five-Oh.
The things she learned today! That show is back (remember the old one?) and the new cops are pretty hunky. Plus, she still has retained the skill of reading, eating, watching TV while occasionally wiping counters and talking on the phone.
Did she mention she also got caught up with her grading?
And if regular readers think that she has suddenly inhabited another woman's calmer, peaceful and productive life, the Matron will share that she has the previously unimaginable pleasure of being ALONE in her house for an indeterminate amount of time (not lasting longer than 48 hours and perhaps even already over for potential intruders -- excuse her while she tells John to put away his baseball bat and the dogs to stop baring their teeth).
Alone. Alone. Alone. From climbing into clean sheets to waking up in sheets with nobody else hogging them. Breakfast, lunch, dinner. Not one time today did she hear this word reverberating through the hallways: "MOM!"
God-Universe-Buddha-Oprah-Allah?
Thank you.
Posted by Minnesota Matron at 8:52 PM 9 comments: