When the Matron was a Wee Miss--as in about five or six years old-- her parents parted ways.   The situation was, uh, unamicable.
For the rest of her childhood, her father was the Dangerous Interloper, the Wayward Unreliable Wanderer, the Evil Influence Waiting to Happen.  Wee Miss saw her father just a handful of times over the following 13 years.  Maybe five visits?  Six?  She can't remember.
She does remember an uncomplicated, continuous narrative about her father -- from her mother --that went something like this:   That man is bad.  Tainted.  Dangerous.  Evil.   Worst mistake I ever made.
The Matron also remembers her mother telling her, frequently, that she (Young Miss) was "exactly like your father.   Rot.  You look like him, too."     Hitting was not absent from some of these scenes.
Young Miss was an unpleasant handful during her teenage years, so there's that nod of concession toward her mother.  And it turns out?  She does look like her father.  But.
When Young Miss went to college and turned 18, emancipated and all get out, she tracked down Evil Incarnate, otherwise known as her father.  Turns out all she had to do was call her uncle, his brother, and dial.
And Evil Incarnate?   Wept when he saw her.   Turned out to be the steadiest, most loving presence in Young Miss's life until he died unexpectedly of a heart attack in 1996.
Pause the sentiment button, right now.
That man?  Deeply flawed.  Who was more grown-up, the Young Miss or her father? SHE was the one who tracked him down and did the Therapy Speak.  Not him.  Indeed, while Young Miss supplied her father with regular and reliable phone numbers for his other two children, he never made those calls.
Too afraid.
Think you're a flawed parent?

Here are the two pearls of parental wisdom that the Matron's father passed on to her:  1)  if you're going to steal, steal big because if you steal small the penalty isn't worth the risk and 2) never steal from someone with less money than you have.
Okay then.  That's come in handy?
But she remains eternally, incredibly grateful that she forged this relationship.   That she decided to know and eventually love this kind, beautiful man.   Because that last edict - don't steal from someone who has less than you have?  Sort of sums up his crazy logic and life.  He wanted to give.   Felt that giving was North on the moral compass.
The reason he never called his other two children?  The Matron thinks it's because he thought he couldn't give enough.  Not that he didn't love them.
Posted by Minnesota Matron at 7:12 PM 15 comments:

Labels: Don't hate me if you're one of my siblings

Why the Matron's Blog Posts Have Been Skimpy

Here is the Matron, driving her daughter home from rehearsal at 9:50 pm on a school night.  Tonight.
Scarlett:  "Mom?  How's Stryker?   Is he doing all right?"

Scarlett:  "I haven't seen him since Monday morning."

Scarlett:  "Well, I sleep a little later because of rehearsal and don't get home until after 10."
Oh.
Scarlett:  "How's Merrick?"
Matron:  "When did you see him last?"

Scarlett:  "Sunday night.  Has he grown?"
This is why the blog is thin.  Don't give up on the Matron.    Stage Mother is staggering toward tech week.
Posted by Minnesota Matron at 8:47 PM 8 comments:

There's a Little Bit of Us All in There, Sister

The Matron, while not this thoroughly unhappy, has her own flashes of malaise and is rather fond of adulation, which she heaps upon her own fine self if there's nobody around to help her.

More coming later today but she is of the opinion that the Salon piece might interst her readers!
Posted by Minnesota Matron at 10:39 AM 7 comments:

Last week was the school district's annual April Fool's joke:  Spring Break.  What a bad idea!
The Matron is concerned that she is producing future research for Leonard Sax, who argues that boys, as General Group, aren't as successful as girls because the former are awash in all things Game, Screen, and Video -- as well as dripping with unecessary ADHD medication and estrogen-laced food.   His main five culprits are summed up here.
Spring Break for Stryker was Opportunity to Lounge in Front of Screen.  Period.  When said enjoyable activity was threatened with cessation in anyway--like that inconvenient eating thing or the totally untenable shower or dreaded actual real time conversation--Stryker suffered complete psychological collapse.  Only return to screen was restorative.
Merrick wore his footie pajamas the entire week.  Let her pause here and note that this is not a fictive moment:  Merrick.  never. left. his. jammies.   That's how motivated he is.   Why did the Matron get an image of the beer can and gut whenever she saw him, flopping around on the couch and moaning for more TV.
On the other hand would be the comparison, which would be Scarlett who toiled at the theatre.  And yes, the Matron is apt:  toil.  Rehearsal Tuesday through Friday, 12-9 another 9 hours on Saturday and five on Sunday.   With no complaining.
While the boys entertained (themselves) at home.
Of course, one child has found her passion and because Merrick is only six, the Matron still holds out hope.   And don't get her wrong -- Stryker is awash in A and Award for Excellence of all sort.
She just wishes the screen didn't have such appeal.
Of course, in her attempt to live in a constant state of heightened irony, she is blogging this, cuddled on the couch next to Stryker--watching 24.  With a laptop in front of her.
Guilty!
Posted by Minnesota Matron at 12:06 PM 7 comments:

April 5th -- After? In the Midst of? A Long Long Cold Dark Winter 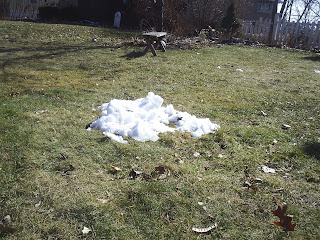