New Environs for the Matron

So much shiny and new:  updated blog decor is still a work in progress but progress has arrived!  As if yesterday's update on Merrick's future as a mercenary-felon isn't enough, the Matron is tweeting under her real name.   Even feigned anonymity is no longer worth the effort.   But the Matron as a distinct personality and writing voice shall remain here, with renewed devotion now that summer as arrived and the job, cooled.  The balancing act of this double personality is on Twitter at mbpetrie. 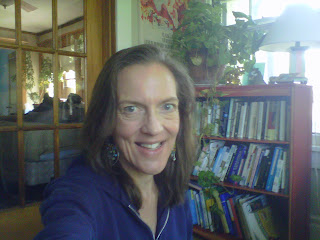 Posted by Minnesota Matron at 5:58 AM 9 comments: 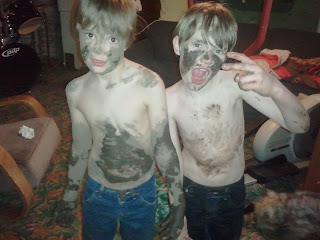 The Matron has frequently blogged about her youngest son:  the gun-wielding, dog-loving, tree-climbing, school-shunning, mud-wrestling man on the left.  A family inclined toward art, literature, music and libraries, has learned to incorporate this: 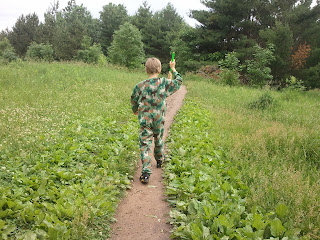 Note:  the Matron took this picture while following Merrick and READING on her Kindle.  That's what she does in nature.  He looks for the best shot.

Here and there, the Matron wonders if she's wrong about her youngest.  Perhaps he's a poet?  An artist in the rough?    An intellectual in-the-making?

Recent Merrick developments, however, have ignited some Matronly alarms.  First, Merrick has taken to COFFEE.   Black.   Started with a tiny sip and has now evolved into daily battles over the entire pot.    His parents allow him a slim half cup in the mornings.

Merrick, to his mother while being picked up at school:  "Can we go out for coffee?"

He also likes doughnuts and asks to lick the rims of his father's empty beer bottles.  The Matron just hopes that he skips the drunk part and goes right to AA.   He appears ready.

Further alarms.  From time to time, the Matron visits her daughter's facebook page.  This is what she found there yesterday:

"I walk into the kitchen and Merrick is sitting there reading the paper and eating cereal.
Merrick:  I'm never gonna live in a house.  Waste of money.
Me (Scarlett):  Where are you gonna live?
Merrick:  Well, I'll most likely get arrest for some driving-relating thing.  Going through
a red light, too many parking tickets, speeding . . .
Me:   But where are you going to live?
Merrick:  Oh, Scarlett .  . Jail, DUH.


See?  It's not just the Matron's imagination.  Merrick is resigned to his life of crime and his sister has begun the process of documentation.  This may come in handy for the social worker.

The Matron's oldest son -- acutely aware of and largely sharing his mother's feminist bent -- has taken to calling her "babe."      She brings him snacks while he's studying and he says "Thanks, babe."   Two words, limitless irony and sharp humor.

This is all lost on Merrick.

Merrick:  "If he calls you babe, I get to call you Missy!"

Matron:  "Only if you promise not to sleep in your clothes again tonight."

Merrick:  "Two chicks and a missy for one night in pajamas."

Today, there is a Show and Tell Gala for third-graders in Merrick's classroom.  Here's what he's bringing, minus the gun. 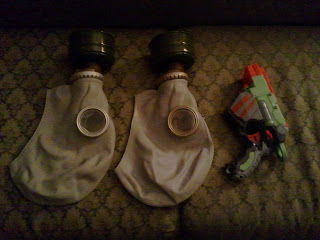 The gas mask isn't just a shelf item.  He actually wears it around the house, the way other people put on flip-flops.

He has also recently acquired an app that serves like a police scanner, allowing him to follow some sort of dispatch from the St. Paul police.    This now occupies much of his time and attention.

Merrick:  "If you get on the scanner and the police are chasing you, is that being famous?"

And the Matron wonders why she's never invited back to offer friendly optimistic advice at those early childhood parenting classes.
Posted by Minnesota Matron at 8:30 AM 7 comments: