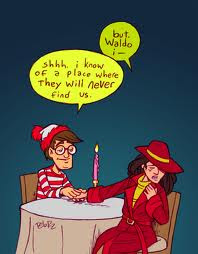 The Matron tends toward the guilty end of . . . . well, whatever stick she's holding. Yellow light? She slows down (way down), just in case it should dare turn red when she's in the intersection, meaning she would suddenly be engaged in, shudder, illegal activity! She'll return an extra penny accidentally given for change and pick the stray paper cup out of 'cans' in public recycling bins.
Does she do this out of altruism? Civic sensibility? No, fear that someone is WATCHING and might mistake her for the culprit that tossed the wrong cup into the can bin or dallied too long at a yellow light. Somehow, there is "my fault" tattooed onto her forehead.
This birthmark beat like Harry Potter's scar today. Yours truly was walking to her van, in the dusk, after the long, long night class. In her hands were: computer bag, purse (lovely item that matched her blue and brown outfit completely), tupperware container with dinner remains, jacket, and umbrella. Let's count the number of hands she has. Now, the number of items. You get the drift.
While doing a lovely little jig to keep this all in balance, the Matron tottered and a piece of paper -- meaningless, something to toss later in the appropriate bin -- flew out of the impeccable purse and onto the parking lot, where it proceeded to whisk away, bouncing up and down out of reach, with the wind. She considered a dive, a dash, a mad attempt to retrieve the paper, and then thought "what the hell." Her hands were full, feet aching. The paper was halfway across the lot.
Everybody is allowed to litter once, right?
BUT! What is somebody is watching?

Immediately, the Matron did a not-so-furtive scan of the parking lot, nearly relieved until she saw him. The witness. He emerged from his red pick-up truck and began looking around the near empty parking lot in a decidedly determined, interested way.
Matron to self: "OH MY GOD. He saw me drop that and not pick it up!! He'll grab the paper and present me with the evidence. What's the fine for littering?"

Panic set in. Guilt.
And then . . the determination left the man's face only to be replaced with recognition, and not of the Matron or her piece of paper, but a woman waiting for him in a parked car not too far away.
As he looked over this shoulder and that, bent his head and scuttled to the car . . . as the woman looked out this window and that, shrunk behind the wheel . ... and as he climbed in only to immediately fall out of sight in an instant deep arm (and probably a lot else) lock with the woman in the car, the Matron realized that she may well be witnessing something mandating guilt, but it was not her crisis to carry.
Damn.
She saw that piece of paper and picked it up. John has nothing to worry about.
Posted by Minnesota Matron at 9:24 PM 4 comments:

Just When You Thought It was Safe to Visit Minnesota

The Matron lives in Bachmann Land. Now, the Matron could link ABC instead (go to youtube and you'll find the official news) but these guys seem like more fun.
Anyhow the person in question would be Minnesota Congresswoman, Michele Bachmann. She makes Sarah Palin seems like a stalwart progressive. If a progressive can be stalwart?
Is it surprising that both women are startling pretty and somehow intelligent policy makers, yet some Americans probably tried to emigrate to France over Hillary Clinton's thighs and pantsuits.
Women and politics in America.
Folks here in Minnesota have been entertained, horrified and, well, baffled, by Bachmann for several years. But she's pretty. The thought of her as one of the -- if not the -- emerging Republican presidential frontrunner(s)?
Hmmm . . . just a minute. The Matron must run and fill out that paperwork for her city block to secede from the nation.
Posted by Minnesota Matron at 9:40 PM 9 comments: