Now that she sees that post title, she thinks that sort of says it all.

At 6ish, the Matron was driving Scarlett to The Sound of Music in Hudson when she got this call from home:

John: "Mary? I think Stryker has been slightly electrocuted. Should I take him to the ER?"

Stryker took the phone: "Mom? Something is wrong with me. I have a burn mark where the current went into me, my left shoulder really hurts and I can't move the fingers on my right hand. What should I do?"

The fact that the Matron was the only person not at the scene of what appeared to be a bona fide emergency, but seemed to be making the decisions regarding that emergency nonetheless, was not lost on her. Still. She sent those men to the ER (thanking God-Buddha-Oprah-Allah she was not the one making that trip again). Merrick's best friend and future husband was summoned and Merrick headed off for a sleepover so that the guys could bond at the ER, unfettered.

Turns out that Stryker had been in at a friend's house when he touched several electronic items simultaneously. He was wearing headphones and had on his gangly person one iPod and one cell phone. So loaded, with one hand firmly gripping the metal strings of an electric guitar, he picked up an iPod that had a little piece of metal sticking out of it--making contact by gripping firmly on the metal.

The boys guess the current blazed through her son for about 15 seconds. Guess, as in retrospect, because while Stryker was "screaming at the top of his lungs," the boys stared at him, wondering why their friend was suddenly hysterical. For his part, Stryker reports feeling disembodied, watching himself from the outside looking in, zapped, screaming, and immobile. Because he could not move his hand to shake off the iPod, he finally twisted and jerked and spun his torso, flinging away the offending item.

So the Matron and Scarlett get the scoop about Stryker's paralyzed digits and throbbing limbs, just as Scarlett is getting dropped off at The Sound of Music. To say this child was hysterical is an understatment. She crawled from the car (again) to the front door of the Phipps, screaming about her brother.

The Matron was, frankly, not quite so concerned. Sure, the child had been thoroughly electrified, but aren't the best burgers charcoaled and blackened? Plus, being on your feet an hour later, reporting, seemed like a good sign.

So she didn't rush back because she had purchased a ticket to SEE that show for the second time. Unlike a some parents (ahem) she will not be seeing her daughter prance about for 8 of 12 performances. Two feels just about right.

While Stryker was being all cooed over and EKGed, the Matron enjoyed another 2.5 hours of various sounds of music. But! This last weekend? After a full week off? The von Trapp children made all kinds of mistakes. All of them. Including, for the first time in 2 1/2 years onstage, her daughter.

Little Marta decided to ask to stay and taste her first chamagne instead of taking leave as the seven year old was supposed to.

After LOUDLY and confidently singing the wrong line, Scarlett's face flashed one split second of confusion and then? That von Trapp smile immediately plastered itself onto her winning face and she rode out the show, perfect. Gretl similarly flubbed, as did Liesl and Brigitte.

Lines were dropped, cues missed. Maria? Lost her voice! The woman who played Maria croaked this to the Matron after the show: "I feel terrible! I've had a cold for 5 weeks but this is the first time the show just wasn't the same."

The best part was that the Matron learned all this after the show. Yes, she noticed the big trips, but the rest were all self-reported by the actors. The audience sucked up every second and gave the cast a standing ovation. Heartfelt!

Also, during intermission, the Matron found John leaving the ER and learned Stryker was fine. No heart irregularities, nothing. Just a burn mark and bad - or good -- luck, depending on your chair.

The ride home consisted of Litany of Error on Scarlett's part (Mom! Did you notice that Maddie forgot to jump up and sing in Goatherd and that Leisl said '' when she should've said 'new mother'?") and hysteria over Stryker (OMIGOD does he have SCARS from the heart test?!!).

When the Matron arrived home at the convenient hour of 11:10 pm, Stryker was in the living room in a certifiable state of post-traumatic stress.

Stryker: "I am numb. I can't believe that happened to me. Let me tell you about this again. Please?" He stumbled around the house like a WWII vet, inquiring after Tylenol. John wasn't even home because he was outside searching the neighborhood for? Who else!! Satan's Familiar.

So the Matron works on all that teeth-brushing, snack-eating rigamarole required to get the traumatized children to bed (Scarlett because of Litany of Error and simple proximity to Stryker) while John trudges through the 'hood for S.F. and as midnight approaches?

As she drove across town to pick up her third child very very early this morning, leaving behind the grilled son and chest-clutching, over-wrought daughter, the Matron very briefly wondered how the night could pack in more fun-- just before running out of gas two blocks from the station.

At least she had a gas can. And everyone was asleep before 2 am.
Posted by Minnesota Matron at 3:06 PM 31 comments:

Slouching Toward Fifty, Eye Bags, Rabid Bats and All

The Matron recently received an email from the husband of one of her readers and friends, thanking the Matron, because after 22 unconcerned and carefree years, his wife is now checking the house for rabid bats. And making him, help, too.

Since she has the power to pass on Behavioral Quirks, here's another for you! She's generous like this, that Matron.

Not that she's done the following.

But it IS possible to torture yourself by pulling the baggy aging skin underneath your eyes, taut, so you look like you're thirty again. And to compare the saggy baggy look you're currently sporting to the surgically possible tucked and tight face.

It IS (theoretically not that she has, is) possible to do this for a good hour instead of grading student essays, contemplating the hard cold fact that on Wednesday, you became officially closer to 50 than to 40 for the first time.

How the Dog Training has Been Going 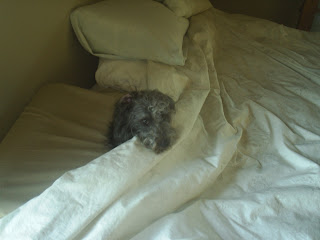 Happy Thanksgiving, everyone! The Matron is very grateful for her readers!!!! Peace to you and your families. . .
Posted by Minnesota Matron at 2:03 PM 11 comments:

She Knew Him, When

A few years ago, the Matron met a poet named Greg Watson through a mutual friend.

Greg is the Matronly Prototype and Reminder that one never knows where talent hides. Take that grocery bagger? Could be the next classical pianist in training. The 20-something with a day job as a preschool teacher? Singer-songer writer aka Billy Joel's Piano Man, at night. (and wow that video now looks pretty chee-z even if the song STILL gives her chills)

Then there's Greg, who works as a security guard at the Mother Ship of the Great Unwashed Minnesota Masses -- The Target Center. So there's Greg, playing Shift Supervisor to thousands at concerts and tractor-pulling events.

And when he's done? He writes poetry that's so good, Garrison Keillor picks this poem to be on Writer's Almanac:

I told you once when we were young that
we would someday meet again.
Now, the years flown past, the letters
unwritten, I am not so certain.

It is autumn. There are toothaches hidden
in this wind, there are those determined
to bring forth winter at any cost.
I am resigned to dark blonde shadows

at stoplights, lost in the roadmaps of leaves
which point in every direction at once.
But I am wearing the shirt you stiched
two separate lifetimes ago. It is old

and falling to ash, yet every button blooms
the flowers of your design. I think of this
and I am happy, to have kissed
your mouth with the force of language,

to have spoken your name at all.


Goosebumps! Chills! She is that taken with this poet! The best part? ALL of his work is that good! It continues to amaze her, how much talent there is in the world, unrewarded, how much art we aren't seeing.

Now, the Matron isn't much of a pitcher. In fact, she cannot even find the time to pimp her own darn blog. (feel free to do that for her whispers the pathetic attention seeking child stored in her belly) But she thinks that there's nothing lovelier and more personal than giving poetry as a gift--a wildly inexpensive way to hand over the world, isn't it?

The book is The Distance Between Two Hands. The genius is Greg Watson. The vehicle? You can find the book on Amazon and at marchstreetpress.
Posted by Minnesota Matron at 10:26 AM 15 comments:

Okay, she dares you to read that last line without tearing up.

And the Michael Phelps of blogging has an invitation, below!
Posted by Minnesota Matron at 5:49 PM 3 comments:

The Matron is throwing a party!

That's right. All you Minnesota and Wisconsin bloggers? The Matron is sitting herself down in front of some food and wine on Saturday December 13 at 7:00 pm, downtown St. Paul.

Remembering that her brother-in-law is a State Trooper with a German Shepherd as partner, only real bloggers and regular people need apply. So if you fall into those broad categories, send her an email message at:

She'll send you details, like restaurant and how to spot her. Hey! She might even talk in the third person, all night long? (not)

And that email is zero one seven. Does that make her a distant relative of James Bond?

Oh!!! Everyone who lives far and away? You're not on the blogroll? Help the Matron tidy up by leaving your blog name and URL in the Comments and she'll add you to that list.
Posted by Minnesota Matron at 5:42 PM 13 comments:

Yesterday, the Matron and her husband took the children to spend some time with Grandpa Dan (John's stepfather) who is dying of liver cancer.

He'll be 83 in December. As Garrison Keillor says in his movie: "The death of an old man is not a tragedy."

But it's difficult to see a life, ending.

Grandpa Dan spends his time watching Country Music videos from the 1950s and 60s. He's a World War II vet with a wall full of medals, some of them for valor during ground combat in France.

Hand to hand ground combat. The Matron can only imagine the horror of that. In 17 years, she has never once heard him talk about the war.

Yesterday was no exception.

She sat and watched videos with him for a solid hour. Mostly, in silence. Just taking in people who passed before us on this planet, already, ---acutely aware that Grandpa will be gone soon, and someday she will be leaving, too.
Posted by Minnesota Matron at 2:10 PM 16 comments: