The Matron has learned one thing about her youngest: He will sell his soul for a sticker. Value system? Completely reward-driven.
Now, your weary exasperated Matron initially made the sticker system a threat out of desperation during Monday's exorcism.
Matron: "I swear to God we are going to start using STICKERS as a reward for getting out of the house!"
Merrick immediately freezes, mid-flail, from his position behind the couch.
"Stickews?"
Even the IDEA got him out the door. Imagine the real thing?! Some fuzzy! Bright colors! Balls, bells, stars, dogs and kittens. Friends, the Matron is here to tell you that you can buy anything on a sticker, including Barack Obama and Willie Nelson.
Wise, wise readers also clued in on another current shaping this stream: suddenly, Merrick is the CENTER. OF. ATTENTION. Including Scarlett's. That's right--Scarlett was the one who created the Mother Board for Stickers, crafted chores (with Merrick and parental input), and determined said reward system.
There was much bartering. Merrick believed that he should get a 'surprise' for each sticker. The Matron thought ten. Global diplomacy ensued and several world wars later, they were grid-locked at 4 (Merrick) to 5 (Matron).
The elder statesmen conceded.
Since Tuesday, Merrick has been obsessed with good deeds. He has set the table. He offers assistance ("Hewe, let me cawwy that, Mama"). Not once as he fought about homework. He has been out the door on time.
To date, he has scored one new Nerf gun and one mini-box of Russell Stover assorted chocolates, which he dutifully -- enthusiastically even -- shared in the spirit of earning MORE STICKERS.
Better yet, his teacher (thanks decades of experience) signed on to be part of the team. She is letting Merrick pick the next Great Book series story that the class will read together.
Merrick: "Mom! I am IN CHARGE of reading in Room 110!"
Be still, oh beating heart! Words she never thought she'd hear.
The battle is hardly won but at least, she hopes, the army is assembled and on the field. (are armies on fields?) And it was definitely time for action. Not necessarily worry, but action.
Thanks, everyone!
Posted by Minnesota Matron at 8:02 AM 17 comments:

Now, the Matron is a big fan of Heather Armstrong. Indeed, she enjoys her Daily Dooce as much as a strong cup of coffee-- both a jump start, of sorts.
Plus, Armstrong has done what so many bloggers long for: launched a profitable hugely successful career (mostly as a writer) from her blog! Go Heather! Hey, the Matron is CERTAIN that her fine self should be number 31 of the most influential women in the media, the list just didn't get that far! And if Time Magazine ever found the Matron? She'd totally top that list. Your loss, America.
Regular readers should feel really good about their sense of direction and good taste.
Anyway, this is all to say -- who the heck is she to criticize Heather Armstrong? But Heather's latest turn has given the Matron, well, pause.
Armstrong has signed on with HGTV's Design Happens. From the looks of the deal, it appears that her life as a wife, daughter, writer, mother will move from prose to video, as well.

How is this different than Reality TV?
Being fond of prose, the Matron would like to argue here that creating slick narrative is an art. Video-taping your kitchen or kid? Seems like that takes fewer brain cells, unless you're Sophia Coppela-capable of turning the mundane into art.
But maybe this is just the mundane into . .. money?
Dooce.com is indeed more media empire than artistic venture. Just took the bleary Matron awhile to notice. Still, she would be happy to see Armstrong at number 1 on some list, next year. . . while your stalwart middle-aged Matron keeps trying to climb on SOMEBODY'S radar
Merrick Emergency Update Tomorrow.
Posted by Minnesota Matron at 3:31 PM 8 comments: 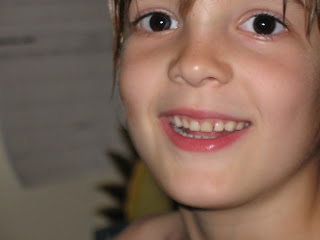 Do not be deceived.
That's right. It's time to get serious.
This morning, the Matron's most adorable child -- that would be her BABY -- required a near exorcism in order to walk to the front door and head to school.

There was groaning. Falls to the floor. Head clutched in pain. Throat? Agony. Cough? Check. Hysteria, usually Scarlett's domain, claimed Merrick. Who simply COULD NOT go to school. Again. As usual. This time, it was the Plague in all its glory. Even his thumbnail ached.
"Take my tempewtuwe! I have a fevew! Heaw this cough?" Hack, hack . . pause . . hack. Pause and survey the audience. Hack, hack, sniffle.
Matron: "Merrick, you have to go to school."

Merrick: "Nobody cawes about me!"
Here's what happened over the weekend, every time the Matron inquired after homework or asked the youngster for a snuggle and a book.
Merrick: "You HATE ME."

When the door closed behind her family this morning (thank you, John, for always driving to school), after a half hour shout-fest (AGAIN) about the merits of school, the Matron knew that business as usual was over.
The teacher has already been contacted: HELP! The Matron is making a chart with stickers, and outlining in permanent marker, what life genuinely demands from a soon-to-be seven year old: homework, reading, going to school on time, dressing without parental assistance. Did you catch that last one? Dress without parental assistance. Scarlett has been ripping through multiple daily (hourly) outfits since she was two and a half. Merrick lays on his bed and hollers: "Can somebody get me my clothes?!"

She figures he'll need at least two stickers earned before TV time, maybe three. Earn ten in a two days and there is candy in that child's future!
Yes, she is deploying both the carrot (or the Tootsie pops in this case) and the stick! She will even purchase and make the most lobbied for forbidden quasi-food item, ever: Jell-O. Desperate times and all that.
Friends! She knows you're telling her not to worry. Okay, fine. But how can she help this child?
Posted by Minnesota Matron at 11:31 AM 23 comments: