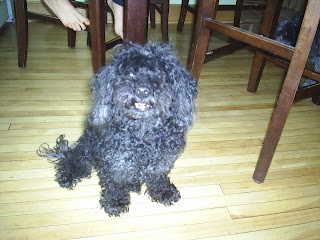 About a month ago, theMatron was innocently reading the newspaper when she tripped over this:

"Small Dog Rescue, a nonprofit that rescues small dogs in the upper Midwest, needs foster homes for dogs to stay while they await adoption. Contact. . . "
Just like that, she lost her senses.
She thought: what a great family project, caring for small dogs!
She promptly forgot the other ongoing already existing family projects:
Those are just the emergency family projects. Then there's Actual Student Anything.
Still, those senses were gone so she signed on for one more duty in an already busy life. And told her children after the fact, as a surprise.

Joy! Ecstasy! Complete abandon! Praise heaped upon their mother.
Stryker: "For once this family will do something interesting."
Well, okay, begrudging approval. But the other two screamed and whooped.
On the administrative front, the Matron might have signed on to become a CIA Agent, Small Dog Rescue did that much Investigation of her fine self. They called ALL of her many references and even checked in with their vet!
So the Matron was all groovy with the process of being vetted, feeling a new unimagined kinship with Sarah Palin and sort of all process-oriented and down to detail. The Small Dog folk operated by email and she was linked in and looped up and copied about this dog and that, until it was finally established that her first foster dog would be Abby, a toy poodle.
Then she got the email with the 'Information Sheet' on Abby. She clicked on that attachment and started reading.
What are the circumstances of the dog's release? We've had Abby for 13 years, since she was a tiny puppy. For the past 5 years our lives have been very difficult. We haven't been able to afford a vet or groomer. Now we might lose our house. We love Abby very much but with our family situation and troubles and now the house issue, it is clear that we can't take care of her. We've been thinking about this for over a year and the time has come."
The Matron actually honestly hadn't fully realized that these rescued dogs came from somewhere. They had a story. And this one had a family, giving her away.
Later that day she found herself in her kitchen with her family as they gave another family (a husband and wife) privacy -- in the living room -- to say good-bye to the dog they loved and had lived with for over a decade. To say there were tears?
A river ran through them -- all of them.
And the Matron didn't inquire. She didn't try to get detail or reason or background - the why? What happened? What forced you? Are there children? How do they feel? What's the matter?
She wanted to know their story but didn't ask. Instead, she opted for dignity, grace and reassurance.
Afterward, she shut the door behind what looked like a very average middle-class, middle-aged couple holidng each other for support as they wept their way to their car.
Harder still were the two days this little darling spent waiting by the front door for her family's return. 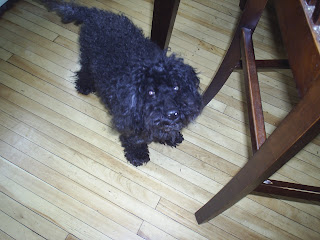 My first thought was that you'd truly lost your mind. And maybe you have, but wow--what a gift you are giving both the couple and the dog.

Oh -- so sad. I can't imagine having to give up my cats because I couldn't afford them. I'm glad you gave their sweet dog a good (foster) home-- do you think you'll just keep Abby?

Oh this so got to me. Our work hours don't make it fair to any animal except the independent kitty to foster, and my heart would break with every entrance and exit to my home. You are a wonderful family to take on this role.

I tell you it is taking every pyschological fiber I have not to adopt this dog! But we just can't adopt the very first -- then we wouldn't be able to really provide the service that Small Dog Rescue needs by fostering. . plus, two senior doggies? Sigh. . anybody want Abby? :-)

So sad. But I'm sure that your family will make Abby feel at home and comfortable. She'll be missing her family terribly.

This gets me to thinking. Thinking that you are a saint, first off and thinking that there may need to be some Patrons of the Animals. Funds for keeping animals where they are loved and needed but underwriting their basic costs. Hmmmmm. My brain is whirring.

Oh gosh. That story is heartbreaking and I bet it's happening all over.

Queenly -- a couple of my friends have also said this. Why can't we find a way to support the family? The only rebuttal to that I can think of is time. Yes, a nonprofit could give money for a vet but not insure that someone had the time to be with the dog more than two hours a day, day in and out. No easy answers. . .

Oh, dear Matron. Thank you for doing this.

My latest post is about needing a good cry, and I fear your last sentence about Abby waiting by the door very nearly triggered it.

But I'm opting for dignity myself in this moment.

But hell, woman. You do tell a story.

Matron, I think you need to seriously consider a type of warning system before blog posts. Like how likely I am to cry during one of your posts on any given day. This post? Would have been a 10 on 1-10 scale.

So nice of you to open your home and your heart to this dog.

I recently came accross your blog and have been reading along. I thought I would leave my first comment. I dont know what to say except that I have enjoyed reading. Nice blog. I will keep visiting this blog very often.