This dog is so much fun! (did you hear the mangled, wrangled high pitch of hysteria in that line?)
While the Matron was busy battling nature in Itasca State Park, the legendary Grandma Mary took on the family dogs: fifteen year old, blind and deaf Jekyll and the fiesty Familiar, sent by Satan.

This would be Jekyll, struggling to understand where he is and what's in front of him. 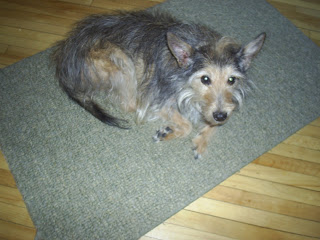 One day into their trip, the Matron called her mother to inquire after Jekyll's well-being. He was fine! Lots of barking at air, but that's the thrill of doggie dementia!

She forced herself to ask. The other one?

Grandma Mary: "Well, Scruffy is attached to me. I'm going to train him not to poop in the house. He's sleeping in a kennel and when he's not there, he's attached to me with his leash."

Matron: "You're wearing the dog?"

Oh, now it all makes sense.

Fast forward to Wednesday morning, when the Matron retrieved the boys. Grandma Mary reported that:

Two days later, the Matron can report, this:

For the new readers who missed it, there has been much of this lately, too. The new mailman actually rang the doorbell to ask about whose teeth are touching his fingertips.

Satan's Familiar is currently sound asleep on the bed, with two peanut butter sandwiches, half a cupcake and a quarter pound of turkey in his belly. Yes! He can also find his way on top of a kitchen table!

Anybody need a puppy?

Posted by Minnesota Matron at 11:05 AM

Indoor Defecation sounds like a GREAT name for a rock band...

"...whose teeth are touching his fingertips."...ROFLMAO!

what. you are not willing to put him on his leash and where him around like Grandma Mary did -- except instead of four days it's like, forever? i don't understand.

I thought our dog was funny because she shreds the mail for us. We don't have to use a shredder anymore, but yours is a bonafide HOOT!

That is funny. Until the mail carrier decides to no longer deliver to your house and you have to pick up mail at the post office.

Maybe he would rather be living with Grandma Mary?

Despite the evidence, I think that is one smart dog. And great blog fodder.

Oh my. That is one excellent video. Also? Our dog would like to high-paw yours. He too loves nothing better than rolling in excrement (unless you count rank, rotting corpses). Did you say *puppy*? How young *is* your tormentor?

I am feeling your pain!
Gilby has decided that he needs to irradicate post people (in all forms, from standard mail, to parcels). He chased the mail lady down the road, jumping on her bike. Then, he chase the courier man around the street. I'm chasing him and screaming, he's barking and growling and the courier man is waving some parcel at him screaming' "Get your dog!!!Get your dog!"
WTF did he think I was trying to do. Suffice it to say, we have to keep him locked away till the post has been.

Um.....no. But Jack can come live with Satan's Familiar. I might not be able to hear them if they were in Minneapolis.

Jenn's right...Grandmama should have him!

You'd do what you were told and crap outside too if you were attached to Grandma Mary for 4 days!!

I think you need a visit from the Dog Whisperer, Ceasar Milan......he'll train Satan's Familiar, plus he's hot!

That dog terrifies me.

"The new mailman" may be a phrase you have to use for a long time...

S.F. totally cracks me up. I like animals with a little spunk (or more than any creature needs). However, I think some of his behavior would be, let's say, a little ANNOYING (pooping inside.) I think he needs a cat to keep him in line. A S.F. cat. That would do the trick.

Yes, but (and forgive me here) not that one.

Jenn makes a good point...Over the river and through the woods?

Funny how they can behave around others but not at home- Stan will go on command anywhere but at our house. At our house we get to take him out every hour or so and even then we have accidents.

just imagine if it was milkbones coming through that mailslot, as they occasionally do through ours. (i have no idea who does it. but we come home to find a little mini milkbone on top of the mail.)

the thing about attaching the dog to you is a time-tested way of training. it keeps the dog from running off and pooping in a corner, and it trains it to stay with you.

it sounds weird but it works.

I am sitting at my desk at work laughing OUT LOUD! Of course, wailing and gnashing of teeth would be in order if this were happening in my house!