Hot Dang, Her Household has Class

Some children remember the potency of lilacs, a grandmother's apron, homemade jam. For others, perhaps, it's a tummy ache and the constancy of their mother, cool cloth to forehead and soothing words. We're grounded in memory, shaped and set in motion by how we see ourselves emerging in the world. Those early memories might be the most precious.

Today, the Matron's youngest child came to her with this.

Merrick: "Mama? Can I see the movie about the bawd guy with da gun?"

Merrick (rage, option number one): "NO!!! Knee-member? My fay-for-it? The puter (means computer) movie about the bawd guy shooting evewything? I WOVE that movie. It's my FAY-FOR-IT! My first ever movie about shooting!!?"

Suddenly, it call came back. Cheney's 2006 accident in which he unfortunately shot a friend in the face. The Matron would like to say that she remembers chuckling over an internet video about this -- a fleeting moment, a non-event.

Instead, she remembers that the then-three year old Merrick sat mesmerized in front of this. Know those American Academy of Pediatrics recommendations about screens and youngsters, all that? Let's just say that the Matron saw those guidelines flailing in the dust, hours back. She hates it when that happens.

And today, after understanding what her child was begging for, the Matron set up "Dick Cheney's Got a Gun" on her laptop. Merrick spent his afternoon shooting alongside. That's a toy shotgun he's slinging at the laptop. Timing and grace? That kid can shoot precisely at the same moment as Cheney. 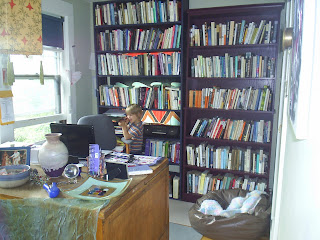 Today he informed her that "Dick Cheney's Got a Gun" is his first -- and favorite-- memory. She appreciates -- in the humbling, ironic sort of way -- the fact that he's breathing down a barrel and all about GUN FUN in the midst of a room full of books on peace and feminist studies.

Good thing the planet is depending upon the next generation!
Posted by Minnesota Matron at 6:41 PM

Aw - that's so sweet! Who needs homemade chocolate chip cookies and a glass of milk when you've got that video to watch instead?

That is nearly too much - the books as a backdrop. Funny what they remember & cling to despite all the other maybe more meaningful moments.

Laura has watched this one over and over again. Betcha Stryker will like learning some ancient history while Merrick is occupied with sharpening the skills he will need to be Vice President some day.

Out of the mouths of babes....

Good job you are blogging all this for posterity....ooh and for us - thanks Matron!

An award awaits chez moi....for it is deserved!

Now, that IS classy. Now I'm afeared to ask what my younguns first memory is. Mine was biting into a raw onion.

What a sweet memory. Bwahhaahaaa!

I have never seen it, is there a way to?

It's an adventure everyday at your house, isn't it?

We moved to NM from FL over a year ago, when Max was almost 4. He said not a word, didn't seem to even notice. Suddenly now he's asking to go back to Florida.

My kids (9 & 8) remember that video clearly as well. In fact, when the original Aerosmith song comes on the radio, they reminisce about the better song with Dick Cheney.