Nostalgia (Even for Sports, which Makes this Breaking News) 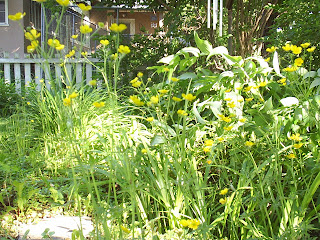 Remember how the Matron is all tuned in, tapped on, has total Fung Shui with her body?

Two years ago, while tending to the greenery and flower she inherited with this house, the Matron was stung by a bee! Ouch! It hurt! Then again, she gave birth to a ten pound baby while screaming for the pain meds nobody brought. Damn you, 9 inch stretch on the ride to the hopsital! So she put some salve on her forehead and continued weeding.

Six hours later, she was in the Emergency Room to inquire, in a calm, academic way, about The Mysterious Virus.

Matron (gasping and clutching lackluster chest): "Doctor? It started earlier today. It's the worst virus, maybe the Plague?! This is between us, but I think it's the Rapture. The fundamentalists were right! I can't breath. I can't stop puking. The other end has issues too. It's really an emergency! Do you notice the panting, gasping element? If we are all not going to our Maker, this will be publishable. The AMA. You'll be famous."

Doctor: "What's that golf ball size growth on your forehead?"

Matron: "That? Oh, I was stung by a bee this afternoon."

You know the end of this story. She got a shot for her very serious bee allergy and now carries an Epi-Pen, which she sometimes refers to as My Fun Adventure Ahead. Now, gardening is a bit more like guerrilla warfare, all those damn bees. 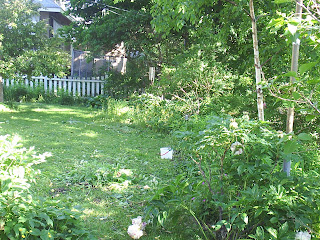 But she worked on the jungle yesterday. That green expanse hides flowers and Death. Cut a peony? First, you must stand back and assess the Enemy Threat, Epi-Pen at hand. The rose bushes? Russian Roulette. 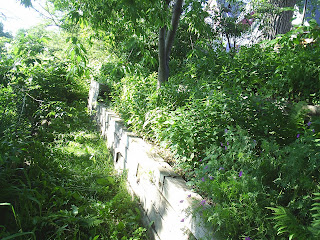 Because her husband works on the weekend, the Matron was the Proud Parental Representative at Parkway Little League's baseball tournament. This one's the biggie, the weekend the league invites teams from several cities. Stryker's team played two games. And won both! Go Stryker! (hint: more on this, coming)

Later, the Matron attended a very fine Solstice party where she met a woman she must've known in another life. Or, she's already a member of the Woman's Colony. 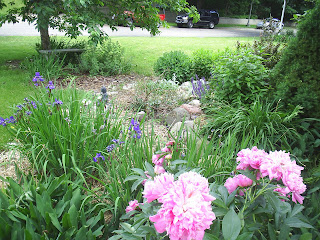 Don't you love women? Once, the Matron met a woman at a public school event and within ten minutes, they were swapping stories about the Twelve Steps, addictions, and emotional adultery. Oh, you can't wait for more posts on those!

Back to the topic. this morning, the Matron hit the ballpark at 9 am for the first of 3 games.

Yes, she teetered on those glass slippers a bit. But. With the smell of grilling meat at the crack of dawn, the dust flying, the heat, the potential for personal injury and the beat of 11 and 12 year old boys -- she kinda sorta got the whole baseball juju -- FOR THE NEXT 10 GODDAMN HOURS SHE SPENT THERE.

Okay--she's 'fessed up to hyperbole for the sake of the story.

So she had a 1.5 hour break in the middle. Spent like this:

At 11:30, she agrees to leave Stryker at Parkway (there are always three games on three fields and plenty to see) so she can go home and feed the 14 and 11 year old house guests the Matron is babysitting (long story - let's cap with the Matron had two extra self-sufficient, non-baseball inclined boys in her stead).

Once there, she works on corn on the cob, sandwiches, washes strawberries from the Farmer's Market (where she was at the other crack of dawn). In the midst of this, Coach calls.

Turns out the entire team is at the Coach's house and nobody could find her son at Parkway. He was paged four times. The Coach suggest that we call the Police if Stryker's not located within half an hour.

Now, the Matron is 100% prone to panic in the best of conditions, so you can just imagine. In the 8 blocks and 90 seconds it takes to drive to Parkway, she is certain she remembers reading that Jeffrey Dahmer had apprentices.

When she gets there, 20 adults are in hot pursuit of her child. But the Matron? She spots him in about 5 seconds, happily acting as Scorekeeper on Field 3.

She flies back to the house for more cooking and clean-up, drives across town to retrieve Scarlett from a sleepover and is back at Parkway by 12:30 with the younger two in tow, where they remain (in states of cooperation and engagement directly linked to age) until 7 pm.

Why? Because in 1 hands-down slam-dunk defeat, and in a final nail-biting, heart-stopping 1 point win -- Stryker's team won the Championship. Undefeated. And Stryker? He got the game ball for Game 2 for most valuable player AND brought in 2 of the 4 runs in the final game! Far cry from earlier in the season. . ..

But during today's long hours, watching despair, determination, discipline and desire filter across these children (and she means all of them, all those teams), and understanding a bit more how brain wattage and strategy matter - and then there's the grass, the expanse of sky and beauty of outdoor play, and the ridiculously perfect junk food, and the skinny kid who finally gets The Hit and the way true team members support each other -- anyway, considering, the Matron tossed that glass slipper against a backstop and let the spirit overtake her! 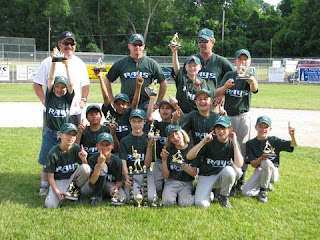 I hate to say this, but Stryker couldn't be found at a ballpark in the brod light of day because MEN were looking for him.

Too funny what Mrs. G said.

And..you deserve a drink and a day off!

Yikes on the bee sting!

Congratulations all around! And Mrs. G (as always) is absolutely right.

I seriously thought this was going to end with you administering your epi-pen when you were stung by a bee while searching for Stryker.

Why. Do. Children. Go. Missing. Right. Before. Our. Eyes? Do they not understand we lose precious brain cells and moments of heart healthy life when they do that to us?

I hate to say it, but I have to agree with Mrs.G.! LOL! Congrats to the D-Rays and to YOU for surviving your bee sting. All worth it for that beautiful garden.

That sounds sort of like how my mom figured out she was allergic to bees. Except, I'm pretty sure her throat was closing in on itself as she drover herself to the hospital, and she might have almost died. Then she got stung by a bee again a week later, and I had to stab her in the thigh with an adrenaline shot, and I was eight.

Whew! Was so nervous during the missing-Stryker part. And he was *right* there, wow. Congrats to the winners!

Mrs. G nailed it. She is so right.

Goes back to the Uterine Tracking Device.