And not just because the children are in school!

Because at least two Monday mornings a month, the Matron experiences Nirvana, which arrives in the gritty form of ValuThrift.

Yes. That is Value without the 'e' and thrift, altogether. Clever, those folks!

The Matron has fawned and fainted over this store before. But after yesterday's travel marathon, ValuThrift became a necessity. You see, some frazzled Mamas eat ice cream or chips to blow off stress. Others might shop Retail. The Matron? She cruises ValuThrift. You get to BINGE with no adverse side effects!

Mondays are 25% off ValuThrift, which is an already base-rate thrift store, a for-profity entity with clean bathrooms, dressing rooms and not one employee who speaks English (The Matron has tested this observation and is completely fine with those statistics!).

Today, the frazzled Matron spent $22 for this $298. Coach purse -- in perfect, lush condition. 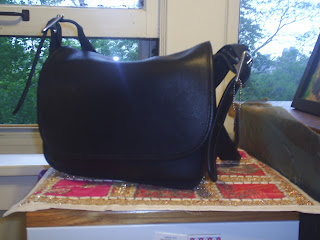 Altogether--between two pairs of capris for Scarlett, sweatshirt for Merrick, Tommy Hilfiger jeans and shorts for Stryker, Levi's for Stryker, FOUR Ann Taylor and Eileen Fischer ensembles for the Matron and a kick-ass JJ Jill dress, two pair of cheapo Merrick pants and the gem below -- the Matron spent $52.

And $48was the original cost of this: 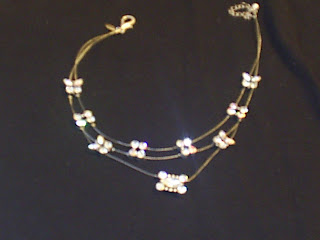 Now, let us digress to the Matron's feeble photography skills. She staged this photo! Selected a black backdrop and -- planned! Managed light and sun and angle. You judge the result. And this desperate second shot? 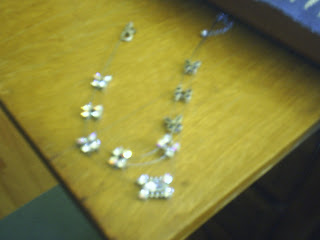 So this is a stunning necklace with the Chico $48 price tag still attached that was part of the Matron's $52 haul. She spent FOUR more dollars than the original price of this necklace for all that stash. She understands her great good thrifty luck!! The photos do not do this justice.

But if she was in charge of photography? You'd be booking air fare for next Monday's 25% discount at ValuThrift.

Later, the Matron spent one hour in the rain watching Merrick's T-Ball game. This is not a sport event, but comic relief. Speaking of which, more on that, tomorrow.
Posted by Minnesota Matron at 12:35 PM

You lucky shopper, you! I never find great things at low prices. I gave up years ago--but I'm always glad for those lucky ones who get bargains:)

I so heart thrift stores. I mean VINTAGE. You did *not* get that Coach bag for $22...see, your blog is 9000 times better than Sex in the City where people pay hundreds of dollars for UGLY bags and then interminably insert product placements for said designers. I should have saved my babysitter money and spent my quality time with my google reader. !

I am so jealous of your shopping prowess.

Oh! You have touched my heart. Thrift stores are my haven. The bargains I've found at Unique on the corner of...is it Dale and University? Anyway, I have found things you wouldn't believe. Half-price on any holiday, you know.

I'm not familiar with ValuThrift - where is it?? Not to horn in on your treasure - but I must check it out.

That necklace is great.

Wowza, you can get all that for so little? I seriously need a ValuThrift. And 25% off cheap is practically free! Superb Matron, well shopped.
The necklace sure is pretty too, but I can't make out if they are round or butterfly shaped?
Thanks for the linky love :)

Nothing better than a deal.

I covet thy Coach bag.

Oh, I adore thrift stores too. When you come down here to Australia, we'll go shopping ;)

We bow to your shoping prowess.
You are truly the Goddess of Bargains!

i never get bargains.

Jill -Forever and Ever House said...

I have a serious thrift store addiction. We do not have Valuthrift (with out the e) in my part of the woods. However, we DO have Value Village which I affectionately call "V.V. Boutique"!!

Angie -- It's in Sun Ray shopping center, that ugly little strip mall right off of 94. Take 94W and either take the McKnight exit or White Bear Avenue exit to get to Valu Thrift. The store is a few doors down from Cub Foods and right behind Bruegger's Bagels. Love directing new friends to this store (sorry Natalie -- I do promise there will be goodies for all of us :-).

Oh, how I love to thrift! When my husband suggests "alone time", I take that pretty 20 dollar bill and run to the Village Discount Outlet where I try desperately not to add to Violet's embarrassing collection of flouncy skirts. My heart skips a beat just thinking about it.

WOW! I love thrift stores and haven't found a really good one here near me. They're so much fun and I love the thrill of hunting for a good bargain. Plus, reduce, reuse, recycle and all that good stuff.

I go to ValuThrift for Buddha's stuffies. If we're ever there at the same time, you'll be able to recognize me immediately: I'm the woman walking slowly up and down the toy aisles feeling all the stuffed animals for the ones that don't have beads, seeds or sand in them.

Yes, you really can't take a picture. The one chink in your armour.

That Coach purse? I'm DYYYYYING. How many hours have I spent on E-bay trying to find just such a deal?

I'm so glad for you that I feel a little snarly for me.