At Your (and the rest of Humanity's) Service

Yes, the Matron spent Friday weeping as her son exited elementary school. This is how ordinary, how circumspect her child appeared. 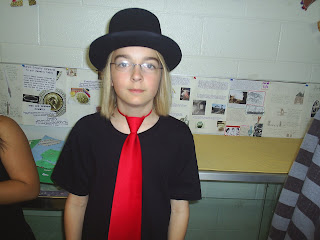 See how everyone else is wearing a top hat? 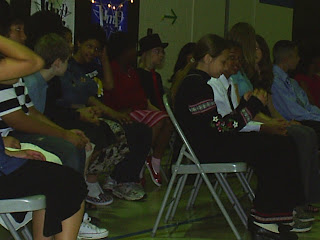 Today, the Matron spent her day contributing to the Saudi oil economy.

Well, most of it. She tossed in a little bit of this, for spice and sass:

Ring! Ring! Ring! This is the telephone at 7:15 a. (#$#%^^$^) m. on a Sunday morning. A parent who also has a child performing at SteppingStone Theater who wants the full scoop on a morning parade in which the actors are walking - which starts at 10.

The Matron filled in this parent--here's the starting time, the location, the duration, the end game and all the players and their clothing sizes--and wondered once again what neon sign (CALL ME I WILL HELP YOU WHEN IT IS WILDLY INCONVENIENT) she was wearing.

The parent said this: "Oh, I know it's way too early to call!"

Yes! So why are you?

Those of you living in Norway, Hell, or even, say New York or Minneapolis, who are planning to track down the Matron and phone her should know that--aside from lice infestation or the discovery that Vampires actually exist --one thing terrifies her beyond all else: the early morning call.

Yes, she can run 6 miles and clean up voluminous doggie doo, but she cannot communicate with grace until she has ingested coffee and calorie. And she actually wasn't at all gracious this morning (sorry, parent, but if you go online you see the parade doesn't start till 10 and maybe even an 8:00 phone call would do and even that is too early).

So the Matron was crabby.

Bent on insuring that she cannot afford to retire until she is 97, at another early hour the Matron hopped in her van and drove Stryker to a morning baseball game in a suburb half an hour away.
Then, the Matron drove home, grabbed Scarlett and brought her to the parade. Seeing that the theater company had fewer water bottles than children, the Matron ran to a store and purchased more -- the unsolicited sort of assistance which she does not mind, one wit.

Soon, she drove to the suburb again in order to retrieve Stryker for his 1:00 call at SteppingStone (back to St. Paul) , where he is both Student Stage Manager and Baby Snake (on stage! he's the understudy, called up!).

Immediately upon returning home with Merrick, that child's friend -- who lives just two blocks from SteppingStone --confirmed an immediate playdate which the Matron (never mind Merrick) very much needed.

She drove right back from whence she came, deployed Merrick, and zoomed home to spend one hour cleaning up the mess that one morning of regular family life had made before heading back to SteppingStone to get Stryker to go BACK to the suburb for the tournament.

Alas, the game -- vying for the 3rd place trophy --started at the very same time the final performance of Anansi The Trickster Spider ended! The coach called her cell - in order to play, Stryker had to be there when up to bat. His team was up first! Stryker was the last in the order -- but! Hurry!

Odds against her, she went five miles over the speed limit (wild one!) and prayed for the best. The two-minute cell phone updates from parents in the stands looked grim! Stryker was screaming: "OH MY GOD. I CANNOT MISS THIS GAME. I WILL NOT SURVIVE!" For half an hour.

And as the Matron screeched up next to the dugout, the coach screamed: "OH MY GOD. STRYKER YOU ARE UP!" The boy lurched from the van, someone threw a helmet and bat at him and the Matron let the rest of the sweat pour down her back. Sweat is the new shower.

Then, while watching this nerve-shattering game, the Matron had the horrifying realization that she forgot Scarlett!!! The actors had a one hour work obligation after the show: the Matron was with Stryker but Scarlett was at SteppingStone and needed a ride --somewhere?!

So she became the VERY parent that annoys and begged someone else to care for and transport her child, at the last inconvenient and emergency minute.

Remember how great baseball season is going, bench time and right field, all that?

Stryker hit a triple! Then, at the bottom of the final inning with bases loaded, the other team up, two outs and a score of 3/3, Stryker caught a tremendously high, hugely alarming fly ball and sent the game into extra innings!!

Thus far, Stryker has not caught one damn thing. Not even grounders, wobbling along at 1 mile per month. Not a virus, not a hot dog in a basket. He drops balls that aren't even moving. After the Matron's heart rebooted, she got on her knees and praised The Powers That Be (God, Allah, Buddha, Mother Nature and Oprah): "Oh My Oprah! Thank you for not letting my child drop that ball!"

The team went on to win third place which includes medals!

Spent, the Matron drove back to St. Paul, picked up Merrick, went somewhere else to retrieve Scarlett and finally limped home where upon she unlocked the front door and Stryker said: "When's dinner? I'm starving!"

Monday morning when the children are in school? It's the Matron's Friday night.
Posted by Minnesota Matron at 5:23 PM

How about a 7:30 AM phone call from your best friend telling you that her kids all have head lice? How's that for a wake-up? I loved it, I tell ya...

OMG...I'm breathless just reading this! Whatever happened to Sunday being a day of REST? Hope you get some tomorrow! :)

wow, that made me tired.

Congrats to Stryker on the great game.

I'm exhausted just reading this.....and have been there too.

Where, oh where, have our little lives gone??

Just think of all the time we can spend sitting on our *sses when we're old.....it helps, sort of.

Congrats on the awesome baseball, Stryker!

We unplug our phone :) I figure if its that urgent, call my cell phone. If you don't have my number, it can't be that important.

Spring. Is. Exhausting. (Can't catch my breath here either.)

"Sweat is the new shower."

I will be chuckling over that one all week...

You need to stop trying to better your children through life activity.

Keep them at home to work in the fields, and you'll get your new calico hemmed up in no time.

I have had those days.

Maybe Stryker is a pressure player.

The top hat/red tie/blad t-shirt combo totally rocked!! Gotta love a man who is NOT a slave to fashion!!

Your day made me tired just reading...I hope you enjoyed your "Friday evening"!!
And really, "when's dinner?"...I would have just fallen in a heap where I stood!!!

Sweat is the new shower? I LOVE this (and plan to steal it -- unattributed).

You so totally deserve to climb right into a bottle of merlot, Monday morning or not.

And thanks for visiting my blog! I love when new people come by.

Dear god, woman. Or dear Oprah. That's a hell of a day (yay that they got their 3rd place medals, though!)

I completely understand what you said about Monday morning being Friday night. Except for us, schools out, so no reprieve.

Oh, I had *that* shower this morning...wait, was it Monday? Your weekend made me have to hold the wall I was spinning so fast. Love the top hat ensemble. OF COURSE he caught the ball when it really mattered... !

Just as I started commenting, your new post came through. WILD. You had better copyright sweat is the new shower. That is a GOOD line.