I had a long day and didn't find the time to craft a very compelling post about names (babies, pets, dolls, you name it!). Look for that tomorrow. In the meantime, here's the Holiday Letter we sent to family and friends--using actual stamps and paper! If memory serves, my last Holiday Letter was a memo from Extreme Family Makeover denying our family a slot on their show. Poor us.

It is time to return to the tale of Feminist and King Charming. Remember the unlikely union? He with decidedly Male Ways and thirst for music; she with motorcycle jacket, sneer and single response to Song, all sort. “Is that the Beatles?” But potion and charms have wrought magic: the union remains, lo these sixteen years, strong. King Charming gallantly shoulders responsibility for failing to mail last year’s forsaken Holiday Missive, which Feminist dutifully penned. A nod to Freud, as said Missive was actual scroll of Kingly Shortcomings.

Feminist continues Pursuit of Prose and can claim New York Times byline as pathetic Moment of Fame (so far). The Royal Astrological Chart encourages, so she persists in Creation, with new book underway. She now freelances and teaches writing full time—and portends that soon Adjunct Professor at Community College will be deemed Highly Desirable Status. No stranger to the Invisible Volunteer Cape, Feminist magically transforms into Hard Worker for schools and left-leaning causes, all sort.

Indeed, Feminist and King took on a variety of aliases. The King of Commerce dubbed the pair “Evil Roadblocks to Pleasure.” The Castle popped and sizzled, so full of Electronics, Gadgetry and Game. As antidote, The King of Commerce spent three weeks at Staggeringly Expensive Summer Camp in Wisconsin where he could run free through Nature, and generally commune. The heir apparent spun his way to one throne (First Place in Age Group) in National Yo-Yo Competition. He took up Hammer and created, while fondness for Thick Book endured. The “Evil Roadblocks to Pleasure” preened and plumped when The King of Commerce’s sixth-grade teacher, Despairing, offered the bored Royal Einstein’s Theory of Relativity as private reading project. Alas, now said Royal counters “Evil Roadblocks’” Restrictions and Counsel with: “Yea, but have either of you two read Einstein?” 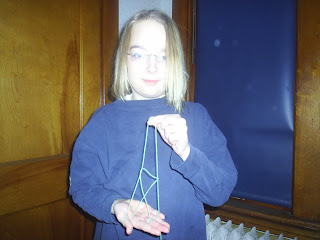 No, but “Evil Roadblocks” can drive and aren’t afraid to go into the basement at night (mostly).

And when Diva became fatally infected with Audience and refused to leave Spotlight, our brave Feminist donned alias steeped in Stereotype and Angst: “Stage Mother.” The Royal Carriage wore thin with Eye-Popping Transportation Needs to auditions, rehearsals, and performances, including Late Night. Diva secured adult-like possessions, as in Head Shot, Resume, and Salary. “Stage Mother” learned to keep Mouth Shut when around others of this ilk and pretends she has Done the Deed She is Postponing when Diva asks (daily): “Is my agent a boy or a girl and when do I meet them?” Significantly (?) common thread of VERY low social status runs through Diva’s roles. She's pictured here as Shoeless Dirty Irish Waif in "The Home Place" at The Guthrie.

When not on Official Stage, Diva creates own. The first two annual Thompson Back Yard Productions have offered The Sound of Music and Annie to well over 100 parents who smiled (annually) in Uncomfortable Beating Sun as Offspring sang and scampered. Lest the countryside fail to appreciate, sound systems, deftly constructed Set, dozens of thespians and one week of Entire Family Devotion are involved. 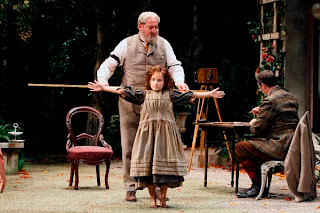 The King of Commerce doth protest! His royal exploits garnered a single paragraph whereas Diva warranted two. Just more proof of Who Gets All the Attention and Nothing Is Ever Fair in This Castle.

Not to be outdone, Prince Charming took up Unpleasant Interest in Weaponry, all sort. Even Santa bears arms. Yet none outshine young Prince when he’s handing out swords or sacrificing Self for four-year old comrades: “No, Lachlan, you take the shot gun, really.” Whether due to Wisdom or Exhaustion, Arsenal grows in the Castle. Yes, Feminist and King Charming have become “The Experienced Parents” in Prince Charming’s social milieu, where offspring are still being created and Kindergarten (as opposed to junior high) is Topic at Hand. Yet “The Experienced Parents” pleasure in Prince Charming’s Penchant for Lap, Cuddle and Kiss. Of course, Prince Charming falls steady prey to the whims and wiles of Siblings, whose delight in Illicit Tutelage have afforded Prince Charming precocious mastery of Swear Words, all sort. 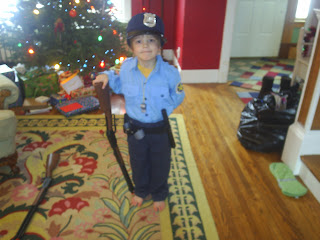 Alas, Tragedy, long foreseen, did strike the Castle. Beloved Royal Dog, Thurston, died in August, just shy of 15th year in the Kingdom. His regal life was long extended by Diligent Constant Care, especially by the King, who slept at Thurston’s side and tended to Difficult Bodily Needs. In October, The King of Commerce, always in Purchasing Mood, spotted peasant pup in need of good home. Thus, Scruffy The Knave was tapped as scourge to the Ancient Regal Jekyll (whose days are defined by Pursuit of Long Nap). But the Kingdom still mourns, changed 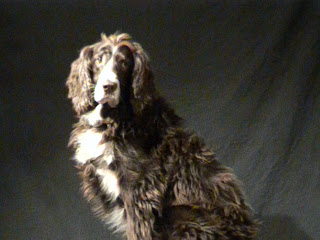 Although Feminist and King Charming would prefer new monikers in 2008, those touched by art, politics, career and financial gain, they understand their current Place on the Planet as Parents, with Categorization, that sort. They extend heartfelt Royal Wishes for Good Fortune for all Family and Friends in 2008, Sweeping Political Change and a lot more Peace on Earth.

Posted by Minnesota Matron at 5:02 PM

If I'm not mistaken, this was the first post I read of yours. I still love it.

that is one INCREDIBLE letter. I am very critical of the Christmas letter, and yours? In the top 3.

I have traveled here via Green Girl: