Wherein the Matronly Faith in the Future is Crushed

Tonight, the Matron and her family took in Batman!! 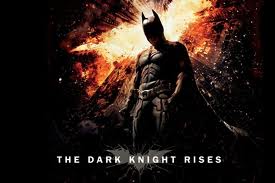 Can she pause here and note that this poorly placed and generally, well, poor picture is why she's soon moving her blog?  Look for info as soon as she's in the process of setting up elsewhere under the actual bona fide Matronly registered name Minnesota Matron dot com.

If that excitement isn't enough for you, let's consider the car ride TO The Dark Knight Rises.   The Matron tries to make every mile count:  her children are captives for the maternal lecture!

The London Olympics provided inspiration and fodder for tonight's lecture.   For the Matron, the Olympics is sometimes a wee little bit about HER and all the stuff she cannot do.  Like swimming.  Or balancing on her toes on a tiny bar or, well, going to London for a month for that matter.

But as God-Buddha-Oprah-Allah-Universe is her witness, her children will make something of themselves!  Who else is she going to live through at this point?

Back to the minivan and captives children.

Matron:  "Did you guys watch that swimming relay?  Those gymnasts?  What discipline and drive!  What good models for setting a goal and devoting yourself to it.  What did you think?"

Merrick:   "Is St. Paul and Minnesota the same thing?"

He starts fourth grade in the fall.  The Matron let the whole drive-desire-discipline thing go too.

The Matronly faith in her future -- humanity's future -- was further challenged at the movie.  No, it wasn't Bruce Wayne who bothered or the adorable up-and-coming Robin or slinky Hathaway . . . but the movie ushers.

Yours truly does not sit through a two hour movie without at least one bathroom visit.  This time, she assisted Merrick as well and waited for him outside of the men's room, where four ushers were huddled -- three young men and a woman, all late teens or early 20s.

Guy Usher One:  "You still going to XX community college?"

Matronly ears perked up!  These were her people!

Guy Usher One:  "I told you that college was just a huge money suck.  Who needs it when you can cash out at 37?"

Guy Usher Two:  "Yeah, I'm going to sit on my ass and punch some numbers or mail shit, and then the party starts before I'm too old."

Girl Usher:  "More people should get these government jobs.  Who needs this reading and math b.s. they make you go through, when all you need to do is work for the government?"

Wait!  The Matron looked around, disoriented?  Was this the Soviet Union of the 1970s?  Kafka, reincarnated as a joke, precisely aimed at the Matron?

Nope.  America 2012.  She listened for a bit as the ushers plotted their futures, lit with the promise of fat government pay checks and the Miller Lite Festival that started promptly at age 37.  Of course, nobody articulated precisely what they would retire from or what branch of government they would be working for or what might happen if everyone did indeed decide to 'get these government jobs.'      Nor did they consider that reading, writing, calculating and basic general knowledge might be -- please must be -- required precisely for certain 'government jobs.'    But clearly, these young people believed that education was for morons who wanted to waste money.   Part of the career plot involved the utter dismissal of any intellectual endeavor.

Guy Usher Two:  "I actually sorta feel sorry for those suckers who waste all their money on school.  What a waste."

The Matron fully appreciates and tolerates the foibles and innocence of Youth, in general.  She too was once a young adult, scheming for the future and generally not knowing of what she spoke or schemed.  That can be forgiven.    The disdain for intellectual pursuits?

This saddens her but can also be forgiven.

Education is both ideal and big business.  The two bump up against one another to construct an impossible situation of sorts.  The ideal doesn't seem to die.   Indeed, ask any politician and you'll hear that educating our youth is one of our greatest responsibilities:  college!  The Matron doesn't even need to explain this as we all know-- going to college, getting an education, is a part and parcel of the American dream for our children (all children - this ideal knows few borders).

What's left unspoken here is that the ideal has shifted.  The ideal of education isn't mostly about knowledge for the sake of knowledge itself, but education as a means to a better life.  By better she means richer.  Education is mostly about money:  securing your position in the middle-class or moving into it, moving up, getting that dream job.  The 'better life' for you and your children is mostly about financial security and a little tiny bit about knowledge.  This is not what Locke, Hume, Mill, Rousseau and Wollenstonecraft had in mind when they helped (in their various historical eras) solidify the ideal of education that emerged during the Age of Enlightenment.  No -- theirs was about an educated citizen, that the well-rounded pursuit of knowledge was good for the spirit of the world, on an individual and collective level.   The pursuit of knowledge elevated the individual and society, created a more just, humane and sophisticated person and world.

The remnants of that original ideal and impulse are what politicians cling to and what we still recognize when we send our children off to college or otherwise extol the virtues of education.  They exist.

In practice, however, the ideals lose their luster.   The problem is that education for the sake of education itself -- the pursuit of knowledge -- is a financially disastrous endeavor.  Who can go to college simply to suck up everything there is to know about botany, philosophy or comparative literature?

Do you know anyone?

Like most ideals -- honesty, love, faith -- education is shinier in theory than it is in practice.   Education is big business as much as it is ideal.  Those ushers?   They were onto something.  For if your definition of a meaningful life is about financial security -- and perhaps, belief in God -- why would you need to read Foucault or master calculus?

That, friends, is what the Matron got out of Batman.  Which is why her children hate going to the movies with her and like to wear headphones in the van.
Posted by Minnesota Matron at 10:34 AM

I would argue that higher education has ALWAYS been about upward mobility and financial security, in addition to being educated. Just look at A Tree Grows in Brooklyn!

That said, and my current disillusionment with the high cost of college coupled with its lack of training for anything remotely remunerative once one has that sheepskin firmly in hand aside, I am irrationally excited about showing the kids my alma mater when we visit Ithaca on vacation next month. I'm trying to dissect that emotion, but I can't. I think the myth of the glory of higher education dies hard.

I wonder how much of the ushers' disrespect of higher education has been caused by a poor economy and the sad job outlook for many college graduates.

My 21yo nephew has never been much of a brainiac but he attended 2 years of community college and then transferred to the local university. He plans to graduate next year and take on the challenge of "special education." I think *he* is pretty darn special.

My 19yo would probably like to go to college for the rest of his life, but it will have to be on his nickel. Unfortunately, he doesn't have 2 nickels to rub together.

Suburban: Now, I know what you're saying but A Tree Grows in Brooklyn isn't 'always.' I'm thinking back to the 18th and 19th centuries when our current conception of education (both its structure and ideal) were solidified. Class mobility as we know it today -- or in the 1940s and 50s -- didn't exist. Education actually wasn't 'for' everybody, but the upper class and some wealthier artisans or shopkeepers. So the social mobility piece wasn't a major factor like it is today. Of course, the social mobility is good and I think there was a time when education was a legitimate move up the class ladder (thinking second half of the 19th and much of hte 20th centuries for America). Because so much of American identity is caught up in 'success' (the rags to riches story as one of several 'ultimate' American dream narratives) and success is about prosperity, those ideals of knowledge as valuable for itself and the self-reflective meaningful (not financially successful) life fell to the wayside as the financially successful life emerged as the ideal American life. That's my theory! There was a book review in the New York Times review yesterday that made me think about this -- Judith Warner wrote an interesting review of a book that argues the main problem with privileged children (wealthy) is that their lives and goals are presented to them in terms of what they can 'achieve' and not 'who' they are. I've just been thinking a lot about what constitutes 'success' in my own life and where I'm finding that definition. So long response to y'all : -)

When I taught high school freshmen, with the goal of helping them see the connection between high school, post-secondary opportunities and being a productive, well-rounded citizen, I often went about it from the money angle. 'Look! Look how much more a person with just a two year degree makes than a high school grad!' My hope was that I could tease them into considering post-secondary with all the promise of a richer life, then cross my fingers that when they got there, they would also get out of it all the things you mention.

My 4-year degree hasn't really provided any real financial or even job security for me. Additionally, technology has just grown so fast that some of the things I paid big bucks to learn in college are now being taught as far down as in middle school! What's really lacking today is some good way for young people to learn real job skills and a work ethic without going into debt and spending 4+ years on the sidelines before being able to earn any kind of decent income at all. Not every job needs all that cerebral stuff that fills the college years, nor is everyone cut out for that. Doesn't mean that they couldn't be really good at something useful, though.

I know this wasn't exactly the point, but can I just say?

Previously a degree wasn't as important for entry level federal jobs, at least in my agency. I got in without a degree. However, just like every other sector, a degreed individual will be selected over a non-degreed individual almost every time. Most job descriptions include requirements for degrees now.

As for retiring at 37? Hahahahahahahahahahaha...not so much. I've worked here since I was 21. I've been her 24 years. I can't retire for AT least another 10 years simply to be eligible for the minimum retirement benefit WHEN I get to retirement age. I have to work well beyond that minimum eligibility requirement.

I have enjoyed my federal career and intend to stay the course, but it's not the party the kids are looking for. Bless their hearts.

I'm with kjazx - municipal employee here (although just learned I'm being laid off - thank you budget cuts!). Government job recruitment is tightening up, and the minimum qualifications to even get on the list are absolutely rigid - no fudging.

I have some co-workers who are losing their jobs as custodians. They've been in these jobs for decades. Now they are trying to transfer into other custodial positions in our city government. Did you know even custodial positions now require a certain level of education and training? These guys, twenty year vets, don't qualify.