Never Live Through Your Children 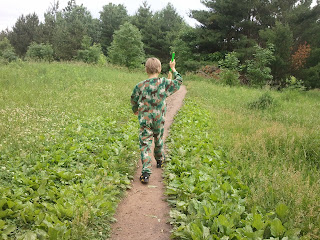 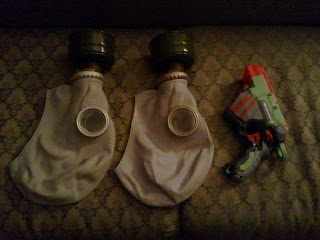 That's right -- slide in by your best buddy and hunker down for forty winks, safe and secure in your WWII style sleepwear! Bunnies and blankets? Why, they make excellent incineration material. And just to make that bed a special soft place, arm yourself well with various Nerf and Air Soft guns.
Then, there is Merrick in an upscale Minnesota grocery store. It is 9 pm, an hour in which most children are home hugging their bunnies and blankets, instead of on the road, buying donuts. Long story.
The important part is that he is wearing, of course, the camouflage footie pajamas. Some children wear uniforms to school. Merrick wears his everywhere else and it is one thing -- camo footies.
In the upscale store, he says loudly: "I should stwat sleeping with a wifle."
Pause.
Joyful: "I fowgot! I ALWEADY SLEEP WITH A WIFLE."
Scarlett (hisses): "You should be quieter about that."
Indeed.
This is a child whose intellectual needs appear to be a gun, a stick and a dog. So imagine the Matron's shock and unparalleled joy when, at his school conference, Merrick's teacher proclaims the young thug to be a bona fide artist. Not a potential felon.
Teacher: "Mary! Look at this poem! Merrick has a real gift for writing. I think he's an artist; I've never ever seen anything quite so sophisticated and well, impressionistic, from a third-grader."
Impressionism! Artist! Sophisticated! Oh, those Matronly knees shook. She took the poem -- its wrinkled, lovely self evidence that her son was (after all!) gifted.
The poem:
Sacred
Negligible
Outside
Winter fun
No one drove home faster than the Matron, armed with Genius. She could not wait to share the good news with her husband!
Matron: "Look at this! It's just so smart -- it lifts and soars, simple but wise! And the vocabulary! Negligible!"
John: "You sure he wrote that?"

Scarlett: "Mom. He can't even say INAPPROPRIATE correctly and he hears that word twenty times a day. Jack wrote it."

Undeterred, the Matron ignored the heretics and presented the poem to this artist himself. A disciple, she wanted to pay her respects to the Artist.
Matron: "Merrick, I am just SO impressed with this. How did you think of the word negligible? That's such an unusual word!"
Merrick -- pauses and inspects his prose for a long, long loooong minute. Sort of like looking at a interplanetary fallout and wondering where in the heck that stuff came from: "Oh yay. I just looked up wandom wowds in the dictionawy and wwote them down in a line. Miss XX loves it."
And with that, he grabbed his stick and trotted off, his mother's heart in his hands and a cloud of apocalyptic ammo dust in his wake.
Some news is simply too good to be true.
Posted by Minnesota Matron at 8:54 PM

I think we should lable this stream of unconsciousness and just call it a day. Artists must start somewhere. Think of Hemingway and his guns!

Belly LAUGHING. I adore that kid.
I mean, your whole family is great, but Merrick is truly his own little man.

absolutely love a man who understands
how the system works & how to beat it!
As for his lovely Mama... yeah I hear you sister.

That he thought to do that is, in itself, a sign of his genius.

I love Merrick! He embodies the American spirited stereotype! Watch out, Scarlett, they'll make a movie about him but you might get to play your own part!