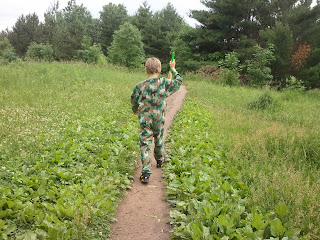 Now, Merrick - he of all things police and militia - just so happened to know that A) there was such a thing as a uniform store that sold holsters, night sticks, mace, police hats, sun glasses, boots, etc. and B) where that store was.
And so the highlight of Merrick's Minnesota Education Festival? Forty-five minutes sighing with deep-seated joy over police boots, uniforms, pins, holsters and rain jackets.
It takes all kinds. . . and this one is hers. Who is currently sleeping with his brand new compromise $8. nightstick, which the Matron deemed far more acceptable than the much lobbied for mace.
Good night Merrick. Just one more Festival day left.
Posted by Minnesota Matron at 9:25 PM

You have to feel safer, knowing he's sleeping with a weapon handy.

My youngest son's uniform store was the hammock store--it was always his first choice when he could pick an outing.

I think my son would have liked the uniform store had he known about it. We had no idea that there were these sorts of outings. He would have been happy with a pair of handcuffs.