The Matron and the Terrible, Horrible, No Good, Very Bad Day 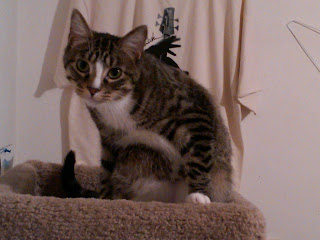 Let's just say this picture is indicative of the Terrible Horrible No Good Very Bad Day.
True. The Matron thought she was uploading a picture of the book (you know the book) and this is what she got: someone's kitten. That's the sort of day she had so she's leaving the photo as a sort of tribute.
True. Everything happened, as reported below.
The Matron woke up at 5:15 am after retiring at nearly midnight. This does not bode well. She trips on the 80 lb coon hound, drops her glasses and is reminded that the dog's name is Big Old Canine. She regrets giving children permission to name pets. She regrets having children who must wake up at 5:45 am on school days.
No toilet paper in the bathroom. The lip balm is empty. Because the tea kettle cover is broken and she forgets, she burns her hand. When it's time to shower, there's no shampoo. She wrote a check for HWCBN to take to school only to learn that John had already taken care of this.
She tried to call one of the children's school to leave a message for the science teacher. After the fourth attempt and a series of strange alerts and perhaps a recording from India, she gives up.
She slogs through student papers, an always rewarding activity peppered with unsigned emails like this: 'give me point on quiz.' One of the keys on her computer keypad pops off. No super glue available. The meeting she scheduled an entire afternoon around is cancelled, meaning she must go to campus for the more or less unimportant series of little meetings she scheduled AROUND and BECAUSE OF the big important meeting.
When she puts on her tights, the toe rips. Oh well.
The Matron quickly checks her horoscope. Things are not lining up, stars! All she gets is a warning to be on time so she hustles out the door, superstition shrouded on her shoulders.
No gas in van. She forgot. For the first time in four years, she cannot find a parking space on campus. Note to self: be grateful for those four years of easy parking.
First meeting goes fine although her exhaustion means she is unusually bubbly and full of inappropriate personal anecdotes. Oh well. Decides to interpret quizzical looks from her colleagues as awe.
Next, she must kill half an hour until the next meeting but is denied internet access -- on her own campus. The library doesn't have the movie she needs for tomorrow's class.
The next meeting takes on more of a therapeutic tenor as the person in charge of all campus secretaries gently alerts the Matron to the fact that she is constitutionally incapable of asking her own secretary to do anything, even make copies, and that this is actually an intervention.
Kill an hour for the final meeting with an online student. . . who is 15 minutes late for a 15 minute meeting for which the Matron waited an hour. The student has but one question which requires a one sentence response. Then the student wants to talk about her family.
The ten minute drive home takes 50 minutes because of construction. While parked on the freeway she exits the van to get a book from the back and loses the fake pearl on her favorite ring. It is somewhat soothing to watch this pearl roll down the freeway.
Throughout, she is very, very hungry but also has to pee every ten minutes because of all the coffee she's drinking to keep herself awake.
The four hour jaunt to and from campus is four hours without grading nearly 100 papers and now it is time to drive Scarlett to Minneapolis in rush hour traffic. The internet connection where she waits for the diva does not work.
These are small things, she knows. And -- friends, she wishes you could see her hand over her heart as she swears this is true -- as she types this she can hear the mole that now lives somewhere in this house rustling under the kitchen sink. How she made this mole's acquaintance and why it remains alive to commune with the mice is tomorrow's post.
Who needs fiction?
But everyone needs inspiration, especially on a Terrible Horrible No Good Very Bad Day. And oh yes, downloading that video didn't work.
She is rounding up the mole, the dog, and the acne cream and going to bed.
Posted by Minnesota Matron at 8:05 PM

Hope you have a far better day today!

Is today going better? Hope so!

Those days. Somewhere someone must think you need character building, but you have to wonder WHY.

Parking at my university...you have to get there by 6:55am now if you want to find a spot near your building.

They are offering "saved" spots for those willing to fork over $1000. Every day I go in there are fewer and fewer spots left in the early am. Revenue stream?

And this is a faculty lot in a state university. Really.

Well if you can do that sort of writing with a bad day it can't be all bad. You have turned the terrible/horrible into the funny/witty. Well done you.